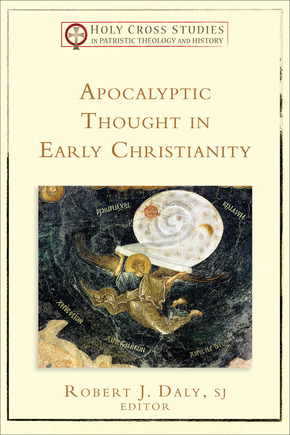 "A treasure trove of essays on apocalyptic in the early church. The fifteen contributing authors represent the cream of contemporary scholars in apocalyptic, and their essays reflect a broad, deep, and impeccable scholarship that often breaks new ground."--David E. Aune, University of Notre Dame
This volume explores how early Christian understandings of apocalyptic writings and teachings are reflected in the theology, social practices, and institutions of the early church. Experts on patristic and Byzantine Christianity present substantial samplings of biblical interpretation, theology, and visual art from first-millennium Christianity, especially from the East, to demonstrate the depth and variety of meaning early believers found in Daniel, Revelation, and related writings.

This is the second volume in Holy Cross Studies in Patristic Theology and History, a partnership between Baker Academic and the Stephen and Catherine Pappas Patristic Institute of Holy Cross Greek Orthodox School of Theology in Brookline, Massachusetts. The series is a deliberate outreach by the Orthodox community to Protestant and Catholic seminarians, pastors, and theologians. In these multiauthor books, contributors from all traditions focus on the patristic (especially Greek patristic) heritage.

About the series: Holy Cross Studies in Patristic Theology and History is a partnership between Baker Academic and the Stephen and Catherine Pappas Patristic Institute of Holy Cross Greek Orthodox School of Theology. The series is a deliberate outreach by the Orthodox community to seminarians, pastors, and theologians of all traditions.

"This treasure trove of essays on apocalyptic in the early church explores important aspects of the Apocalypse of John as well as a rich variety of apocalyptic and eschatological themes and motifs in art and literature up to the middle Byzantine period. The fifteen contributing authors represent the cream of contemporary scholars in apocalyptic, and their essays reflect a broad, deep, and impeccable scholarship that often breaks new ground."--David E. Aune, Walter Professor of New Testament and Christian Origins, University of Notre Dame

"This wonderful volume illustrates the prevalence of apocalyptic themes in early Christianity from the book of Revelation to the Byzantine period. The essays range over a vast amount of material, including not only the church fathers but also apocryphal writings and early Christian art. Much of this material is known only to experts and is here made available to a broader readership. This is a first-rate contribution to the history of both apocalypticism and early Christianity."--John J. Collins, Holmes Professor of Old Testament, Yale University

"A much-needed, comprehensive, and rich study of the Apocalypse as it was read and imaged by early Christian thinkers and artists. This volume will be welcomed by anyone who wants to learn about the complex interpretations of the Bible's last--and most puzzling--book."--Robin Jensen, professor of the history of Christian art and worship, Vanderbilt University

"The most important conclusion . . . is in step with the observations often made in recent years regarding 'apocalyptic': ancient apocalyptic (a religious phenomenon with somewhat blurry edges) combines a variety of solemn, revelatory types of communication interpreted in some religious sense. Expectations of eschatological woes were not the dominant type in the ancient world. The shift of interest in that direction first occurred later, and it is only in modern times and most recently that attention has focused entirely on 'apocalyptic' scenarios of tribulation and doom. . . . This examination of the diverse reception of the Apocalypse and apocalyptic literature is in general stimulating and helpful. Most important in my opinion are the art-historical contributions."--Martin Karrer, Review of Biblical Literature

"In contemporary theology, the category of the 'apocalyptic' has enjoyed revived interest through the works of thinkers such as Nathan Kerr and Louis Martyn. Such explorations invite an investigation into the Christian roots of this approach--an investigation gratefully provided in this volume. . . . The contributors of the fourteen chapters cover a great deal of territory. . . . An excellent collection worth owning for anyone interested in patristic hermeneutics or contemporary conversations around the 'apocalyptic.'"--Myles Werntz, Religious Studies Review

"In such a doomsday atmosphere it is striking that an anthology like this, Apocalyptic Thought in Early Christianity, tugs not at the lurid or fantastic but uniformly asserts a positive note, a word of grace and hope in the midst of darkening days. . . . One of the strengths of this anthology is that it offers a survey of doctrinal, moral, and liturgical theology organized around words of grace and hope. . . . [A] helpful assemblage of research and argument."--Rodney L. Petersen, Boston Theological Institute Newsletter

"As a group, the essays clearly demonstrate that the apocalyptic literature typically associated with parousia is a complex reality of the present and future, in which early Christians lived intensely."--Oleh Kindiy, Bryn Mawr Classical Review

"Apocalyptic Thought in Early Christianity exhibits a great deal of contemporary theological scholarship offered by experts on patristic and Byzantine Christianity who present substantial samplings of biblical interpretation, theology, and visual art from first-millennium Christianity. . . . This rich compilation of new research in patristic eschatology . . . enables scholars and graduate students of the Bible--particularly those interested in patristics and church history--to read the book of Revelation and related writings through [an] ancient Christian lens. . . . Apocalyptic Thought in Early Christianity is extremely well-organized and well-written both for the experts and students of the Bible and early Christianity. As such, it deserves the most widespread implementation in research and teaching today."--Igal German, Theological Book Review

"This wonderful volume contains fifteen essays from specialists in early Christianity and art history discussing the widespread presence of apocalyptic themes within early Christianity from the book of Revelation to the Byzantine period. . . . The essays cover a wide assortment of texts and topics with a strong emphasis on issues relating to Eastern Christianity. . . . The audience of a volume such as this is broad as those with interests in the book of Revelation, apocalyptic in all its various forms, early Christian eschatology and theology, or even early Christian art will find essays suited to their interests. Given the generally outstanding quality and originality of these essays, it seems likely that even experts in these fields will find new insights in this commendable volume."--John Michael Strachan, Trinity Journal