Postliberal Christianity and the Jews 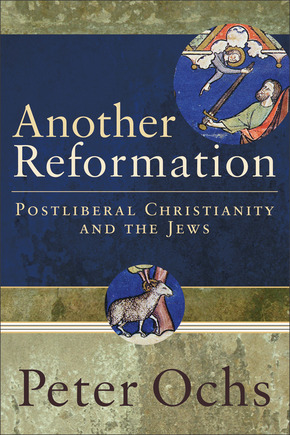 "The upshot of Ochs's careful, erudite, detailed argument is that postliberal theology escapes the traps of both liberal and antiliberal reason and so is not drawn to supersessionism. . . . Ochs, in his practice and in his exposition, exhibits a way of relating and thinking and believing that makes wholeness and healing possible."--Walter Brueggemann, Christian Century Jewish theologian Peter Ochs argues that a significant and expanding movement in recent Christian theology offers a way for Christians to rededicate themselves to the gospel message and to classical, patristic doctrines of the church without revisiting classical claims that, with the coming of Christ, God has replaced his love of the Jewish people with his love of the church. Ochs examines the christologies and pneumatologies of leading postliberal theologians George Lindbeck, Robert Jenson, Stanley Hauerwas, John Howard Yoder, Daniel Hardy, and David Ford, who argue in their work that God's love of Christ and the church does not replace his love of Israel and the Jews. Another Reformation not only provides a detailed study of the movement of recent postliberal Christian theology in the United States and the United Kingdom but also offers stimulating Jewish-Christian theological exchange. Ochs's realization that some Christian thinkers retain a place for the people of Israel opens up the possibility of new understanding and deepens the Jewish-Christian dialogue.
Contents
1. Introduction: Christian Postliberalism and the Jews
Part 1: American Protestant Postliberalism
2. George Lindbeck and the Church as Israel
3. Robert Jenson: The God of Israel and the Fruits of Trinitarian Theology
4. Arguing for Christ: Stanley Hauerwas's Theopractic Reasoning
5. The Limits of Postliberalism: John Howard Yoder's American Mennonite Church
Part 2: British Postliberalism
6. Finding Christ in World and Polity: Daniel Hardy's Ecclesiological Postliberalism
7. Wisdom's Cry: David Ford's Reparative Pneumatology
8. John Milbank: Supersessionist or Christian Theo-semiotician and Pragmatist?
9. Conclusion: Christian Postliberalism and Christian Nonsupersessionism Are Correlative

"Several Jewish thinkers have applauded the recent efforts of Christian theologians to overcome supersessionism--the notion that the Christian church has replaced the Jewish people in God's covenant with Israel as the people of God--without abandoning their own Christian theology. Indeed, the efforts of these Christian thinkers have contributed to the deepening of their theology. Peter Ochs is one of the most prominent of these Jewish thinkers, and in Another Reformation he articulates his applause with unprecedented theological insight and philosophical perspicacity."

"Anyone wishing to discern the contours of a properly postliberal theological ethos in George Lindbeck, Robert Jenson, Stanley Hauerwas, John Howard Yoder, Dan Hardy, David Ford, or John Milbank could not find a more astute guide than Peter Ochs, whose exposition is as penetrating as his critique is incisive. Deftly employing the philosophical tools of Charles Sanders Peirce, Ochs's focus is the bugbear of 'supersession,' yet his clear goal is a mode of exposition and analysis freed from easy polarities. A meticulous reading delineates the contributions each author makes to an inclusive Jewish-Christian theology, and in so doing reveals what renders these thoughts properly Christian."

"Another Reformation demonstrates why Jewish philosopher Peter Ochs has been a seminal thinker for Jews and Christians seeking reconciliation through fidelity to the divine Word. With profound insight, Ochs engages a set of Christian theologians committed both to classical Christian modes of apprehending reality and to the pragmatic exercise of critical reason, and discovers a correlation between their theological sensibilities and a nonsupersessionist orientation toward the Jewish people. In his own interaction with these Christian thinkers--via personal dialogue and written words--Ochs models the virtues he extols in those he studies: sensitivity to the particularities of historical and social context; reliance upon relational rather than dichotomous patterns of thought; an ecumenical concern to heal wounded communities; and an ear attentive not only to the voices of other human beings but also to the voice of God. This is a masterful example of the way Jewish scholars may contribute to Christian conversations, and a reminder that the Jewish and Christian conversations belong in the same room, where each circle can overhear and learn from the other."

"The interface of Jewish and Christian theology has always been vexing. . . . Happily, we are at the threshold of a new way of communicating at that interface. . . . More broadly, no one has contributed more to this fresh possibility than Peter Ochs. With his largeness of spirit, his deep theological sensibility, and his practical passion for fresh work with Christians, he has taken on important initiatives that have made room for new communication and understanding. . . . The upshot of Ochs's careful, erudite, detailed argument is that postliberal theology escapes the traps of both liberal and antiliberal reason and so is not drawn to supersessionism. . . . Ochs has performed a formidable interpretive task that awaits follow-up in local settings. . . . Ochs, in his practice and in his exposition, exhibits a way of relating and thinking and believing that makes wholeness and healing possible."

"[Ochs] finds the postliberal turn in theology worthy of sustained attention. [He] effectively show[s] that it takes us to the heart of the substance of Christian faith. . . . [He] makes a strong case for the continued viability of postliberalism. . . . [Ochs] is at his best in showing how postliberal theologians, far from being dogmatic anti-modernists, are driven by a passion to effect the healing of divisions. . . . We can be grateful for this extraordinary intervention in Christian theology from one of its chief Jewish friends. This book is indeed a gift. . . . A vindication of substantive, scripturally serious Christian theology."

"Ochs's work is a major contribution to Christian theology because he identifies a form of theological reasoning that is clearly helping to repair Jewish-Christian relations by rereading Scripture in the light of theological matters of first importance, such as the election of Israel."

"Ochs provides Christians creative ways to hold sacred a place for the people of the covenant and to open up a mutually enriching understanding in Jewish-Christian dialogue. . . . He makes his erudite arguments through logical syllogisms and axioms. . . . This important treatise is written for the academy and for religious leaders seeking theological perspectives to break open fresh ground for interreligious dialogue."

"Ochs' latest book is in many ways the culmination of a life's work of detailed analysis, generous and tough conversation, and patient exposure of errant thinking in theology. It is explosive, radical, and in places devastating in its critique of certain habits of theological thinking. It lays bare the disappointing failure of several generations to train theologians in philosophy (and especially in logic) and identifies with troubling precision the possible violence to which this failure may lead."

"Jewish philosopher and theologian Peter Ochs states the thesis of his latest book in a simple and elegant formula: he proposes a direct correlation between Christian post-liberal theology and nonsupersessionism. Ochs tests his thesis by offering close, analytically rich, and nuanced readings of a select group of Christian post-liberal theologians from both sides of the Atlantic. . . . These readings constitute a gift to Christians interested in the relation of the church to Judaism and its Jewish neighbors, setting the bar for genuine inter-religious encounter at the highest level. Ochs demonstrates a commitment to hearing others in their own voices rarely matched on the Christian side of the conversation. . . . Ochs reveals a complexity to Christian theological supersessionism rarely addressed in similar work. His treatment of this complexity suggests a post-liberal remedy that brings renewed promise for a nonsupersessionist--or at least a less supersessionist--theological future, with all that means ethically for the future of the church's relations with its Jewish neighbors."

"There are many reasons why Ochs is the perfect candidate for this study. He has been engaged in Jewish-Christian dialogue for many years. . . . He is focusing his study on the subject of supersessionism, claiming that the traditional argument that God replaced Israel with the Church is a deformation of Christian theology, something that many postliberal thinkers have posited. Finally, he knows all the principals here, having worked with many of them. . . . Ochs is an exuberant, expansive, relentless thinker. This book crackles with his energy and erudition. . . . Ochs is convincing as he argues his central point that nonsupersessionism is a distinctive feature of every truly postliberal theology. He is also hopeful that theological trends in which Christians adopt a high Christology and Jews claim their own identity do not have to lead to division."

"There are very few books that transcend their subject matter. Those that do address broader and deeper issues than their ostensive topic. They also come to serve as models for others to follow--whether or not they are working on same topic. Finally, they provide substantive insights into not only the topic they explore but the task of writing as a whole. Peter Ochs's Another Reformation is one such book. . . . He displays his own formidable theological and philosophical skills, which serve as a model that Christian theologians should follow. Specifically, Ochs provides insights into theological methodology and major theologians that should inform the broader work of theology in the future. . . . I am largely sympathetic to the resources Ochs's approach and methodology offer to comparative theology. Indeed, his approach offers the most fruitful framework I know for comparing different strategies of reading in different faith traditions."