And I Turned to See the Voice

The Rhetoric of Vision in the New Testament 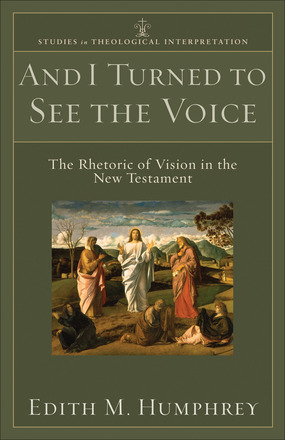 Vision reports in the New Testament--Stephen's vision at his stoning, Paul's experience in the third heaven, John's apocalyptic visions on the isle of Patmos--pull readers and listeners into a dramatic and dynamic thought world. Author Edith M. Humphrey takes a literary-rhetorical approach to examine how word and image work together in understanding vision reports, demonstrating how biblical visions convey and reinforce messages that deeply affect readers. Visions, Humphrey believes, have not only been seen and heard but also can be transmitted as more than teaching. And I Turned to See the Voice uncovers a fascinating combination of beauty, potency, and mystery behind New Testament vision accounts.

"The argumentative and aesthetic contribution of vision-reports to persuasion in biblical texts is an exciting area of investigation, one in which Edith Humphrey has already distinguished herself. Her literary skill is evident in the ways in which she, as a sensitive reader of texts, invites us to be more attentive and engaged readers ourselves as well as in the ways her own winsome style encourages us to read both the texts and her observations on them with a 'hermeneutics of welcome' rather than the customary 'hermeneutics of suspicion.'"--David A. deSilva, Trustees' Professor of New Testament and Greek, Ashland Theological Seminary

"Rhetorical studies of apocalyptic literature emerged about fifteen years ago. This collection of essays by Edith Humphrey tracks her substantial contribution to this movement and offers three other contributions. First, the essays collectively demonstrate that within the New Testament visionary rhetoric performs diverse functions. . . . Second, the essays embody Humphrey's intention to employ rhetorical criticism toward theological insight. . . . Third, the book never wanders far from the question of textual determinacy. . . . Admirable projects, these. . . . Humphrey clearly enhances our appreciation of apocalyptic discourse and our understanding of the texts she studies. . . . The value of this book lies in Humphrey's demonstration of the multivalent rhetorical potential of vision accounts and in her application of literary and rhetorical sensitivity toward theological interpretation."--Greg Carey, Review of Biblical Literature

"Although a staple of biblical discourse, reports of extraordinary dreams and visions have not been examined by biblical scholars as much as other literary forms. . . . Edith Humphrey helps redress this imbalance in her careful investigation of four clusters of NT vision-reports drawn from 2 Corinthians, Luke-Acts, and Revelation. . . . This work provides a creative, engaging tour behind the curtain of oft-neglected NT vision-reports."--F. Scott Spencer, Interpretation

"This book offers ground-breaking insights into key NT passages. . . . Humphrey writes in a style that is delightful to read. . . . Humphrey's commitment to a hermeneutics of receptivity rather than suspicion is welcome. . . . Humphrey deftly employs rhetorical analysis, which she introduces for readers unfamiliar with the discipline. . . . The book is most appropriate for graduate students, well-read pastors, and especially anyone writing commentary. . . . It is a book that needed to be written. It offers original interpretive insights. In the spirit of the series, Studies in Theological Interpretation, the book seeks to discover the governing intent of the passages under consideration--in the full light of God and his program, with a balance of faith and reason, and with reference to the best of current NT scholarship. That adds up to a significant book."--D. Brent Sandy, Journal of the Evangelical Theological Society

"An original and substantial contribution to biblical and theological scholarship. . . . The book offers a dense and coherent treatment [of New Testament vision-reports]. . . . The originality of Humphrey's contribution lies precisely in providing a compelling solution that moves us beyond the false dilemma of Jewish apocalyptic vision versus Greek rhetoric. . . . And I Turned to See the Voice is beautifully written. As one would expect from a scholar attentive to how authors convey their message, Humphrey writes in elegant and vivid prose, providing not only arguments but also striking analogies and a number of bons mots to illustrate and underscore the points being made. . . . Aside from its primary audience--specialists of rhetorical criticism--this book should be of great interest to graduate students and scholars in the general area of New Testament studies and Christian origins."--Bogdan G. Bucur, Anglican Theological Review

"[A] provocative book. . . . Humphrey is a very capable literary critic and demonstrates an impressive understanding of vision-reports as a literary 'genre.' Moreover, she excels at reading these reports within their respective discourses and offers many keen observations concerning how various New Testament authors utilize these episodes to accomplish their rhetorical objectives. Advanced pastors and scholars interested in biblical vision accounts and in the study of New Testament rhetoric will find this book illuminating."--John K. Goodrich, Theological Book Review

"Examining conspicuous functions of vision-reports in their literary contexts, while underlining implicit or explicit authorial intents, is Humphrey's most noteworthy contribution in this work. . . . Anyone interested in investigating the vision-reports in the New Testament cannot afford to overlook this work."--Dokyun (David) Lim, Southwestern Journal of Theology

"This is a beautifully written book, clear and engaging, a model of an interdisciplinary approach. Rhetorical criticism, literary sensitivity, intertextuality, and knowledge of patristic exegesis are woven together into a seamless and illuminating whole. While hardly uncritical, it also reveals the potential of employing a 'hermeneutics of welcome' rather than starting with a presupposition of suspicion."--Ian K. Boxall, Journal for the Study of the New Testament

"Humphrey writes with a light touch. . . . This is quite a unique work, focusing as it does on rhetorical analysis of vision reports. It is, however, far more than this. It is a delightful exercise in theological interpretation of Scripture. Humphrey closes her volume with compelling pleas for a lively Christian imagination on the part of readers--not one, however, that is unmoored from discipleship but one that seeks to welcome and honor the text, inviting it in as a guest, allowing it to do its work of devastation and transformation."--Timothy G. Gombis, Bulletin for Biblical Research