Ancient Texts for the Study of the Hebrew Bible

A Guide to the Background Literature 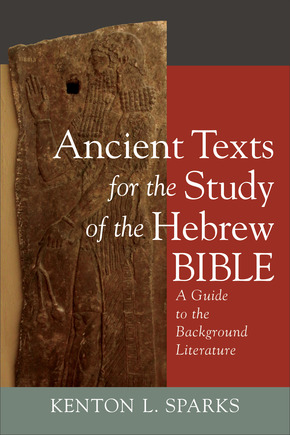 "This book is essential for everyone dealing with the Hebrew Bible in its ancient context. . . . All future comparative scholarship will take this book as its starting point."--Review of Biblical Literature

The Hebrew Bible represents no mere collection of books but a stunning array of literary genres. To fully illuminate the history and culture of the Old Testament, it is necessary to compare these ancient writings to similar texts written concurrently by Israel's neighbors. Beginning with an overview of the important literary archives of the ancient Near East, Sparks provides exhaustive references to the ancient literary counterparts to the Hebrew Bible's major genres. Surveying the ancient writings found throughout Egypt, Mesopotamia, Anatolia, and Palestine, Sparks provides a brief summary of each text discussed, translating brief portions and linking them to literarily similar biblical passages. Exploring over thirty genres--wisdom, hymns, love poetry, rituals, prophecy, apocalyptic, novella, epic legend, myth, genealogy, history, law, treaty, epigraphic materials, and others--it offers an exemplary guide to the fertile literary environment from which the canonical writings sprung. Rich with bibliographic material, this invaluable catalog enables the reader to locate not only the published texts in their original ancient languages but to find suitable English translations and commentary bearing on these ancient texts. A number of helpful indexes round out this outstanding resource. Providing students with a thorough introduction to the literature of the ancient Near East--and time-pressed scholars with an admirably up-to-date research tool--it will become a syllabus standard for a myriad of courses.

"For generations, specialists have begged for a book that would convey the literary richness of the ancient Near East to students of the Bible and of the classics. Kent Sparks's handy reference guide is now here to fill that need: elegant in presentation; judicious in contents, with precise summaries of opinions; and helpful bibliographically."

"Students and scholars of every level will save days of catalog and preparation time for any one project just by having this ready to hand."

"Frustrated over the lack of comparative bibliographic resources at his disposal in graduate school, Kenton L. Sparks has ventured to write a massive introduction to and overview of the Hebrew Bible in its ancient Near Eastern literary context. One is immediately struck with Sparks's extensive background in ancient Near Eastern civilizations, which makes him well suited to write a book such as this. The book is a bibliographic reference marvel. . . . Sparks is to be congratulated for compiling such a useful reference tool; it will be of great use to biblical and ancient Near Eastern scholars alike."

"This volume fills an important gap in the existing resources for understanding the Hebrew Bible in its ancient Near Eastern context. . . . This work . . . provid[es] solid discussions of a wide range of ancient Near Eastern literature relevant to the Hebrew Bible, organized both by genre and by geographic regions. . . . This book is essential for everyone dealing with the Hebrew Bible in its ancient context. . . . Taken as a whole, it is a thorough introduction to the variety of genres in ancient Near Eastern literature and their relevance for the Hebrew Bible. The chapters can be consulted individually for an orientation to specific literary forms, for exemplars from specific locations, or for individual texts, as well as for contemporary scholarship on any aspect of the preceding. In short, all future comparative scholarship will take this book as its starting point. The ability to dip into the book for a specific point of reference is greatly enhanced by the six indexes."

"Anyone interested at all in exploring the world of ancient Near Eastern literature and its relationship to the Hebrew Scriptures cannot afford to be without [this book]."

"Sparks's fifteen chapters provide a genre-based discussion of ancient Near Eastern texts that in some way contribute to the study of the world, the literature, and the text of the Hebrew Bible. . . . While the primary audience for Sparks's book is students, it will also serve as a helpful reference guide for biblical scholars."

"[This book] greatly enhances our ability to understand the key features of comparative ancient Near Eastern literature in a most accessible fashion. . . . The strength of this unusual book lies in Sparks's ability to clarify the genre, context, and parallels of each entry. With mastery, he broadens the horizons of the study of the Hebrew Bible with only a few strokes of his brush. The black and white world of genealogies, lists of kings, mysterious rituals, and obscure prophecies can be seen in a full array of color. Each chapter includes an introduction that explains the significance of the category or genre and frequently contains a sketch of scholarly debates. Individual or related texts are discussed in succinct paragraphs ranging from a half page to two pages, followed by bibliographic information on primary editions, translations, and secondary literature. Timelines and maps are included. Sparks does not hesitate to provide analyses; hence his discussions are never mere descriptions. The book will be appreciated by scholars and students alike."

"An essential component of modern critical study of the Hebrew Bible is the examination of the biblical material within its larger literary context. . . . Sparks's book is a very welcome addition to the field and is unique in a number of important ways. . . . Sparks's method might best be described as descriptive and analytical as he both summarizes and evaluates the ancient Near Eastern evidence. But perhaps the most innovative and useful aspect of Sparks's book is the organizing and categorizing of the material. Taxonomy is this work's defining characteristic and its great strength. The need Sparks felt as a student for an introductory survey of comparative literature for Hebrew Bible readers has resulted in a resource that is unlike any other. . . . Bible scholars . . . owe an enormous debt to Sparks. . . . [This tool] will facilitate their work for many years to come."

"Sparks has compiled a very useful book that supplies introductory matter and lists bibliography. . . . The compiler should be encouraged to update it regularly."

"This is the fullest collection sui generis to date. . . . The book is illustrated with a number of maps and charts. The exposition is lucid and clear. The book is a good reference guide for the serious student of biblical literature. Academic libraries of institutions with programs in Bible studies, comparative religion, and comparative literature will be the primary address for this book. I recommend it for the reference shelf both for undergraduate and for graduate students."

"This is an interesting and unusual work of reference designed for students and scholars of the Hebrew Bible. . . . Where this work scores highly is in the explanation and interpretation of comparative material, summarizing content and elucidating its relevance for the Biblical text itself. . . . A notable feature is the very substantial bibliographical content, each section being followed by references to texts, translations, and bibliographical resources in both monograph and journal literature. These constitute a significant work of reference in themselves, regardless of the commentary. However, it is the latter that makes this work so valuable to the student, since it provides an introduction and overview of the field that is not easy to find elsewhere, at least not at this level. . . . The standard of scholarship is extremely high, and the coverage of current research comprehensive. . . . The guide could be used at a more general level as the style of writing is very accessible and the content very clearly explained. For such a dense text, the layout is pleasing and clear. . . . While one might think this essentially a work for the specialist library, the exceptionally reasonable price puts it within the reach of individuals, and serious students of the Bible from whatever background will find it a worthwhile investment."

"For years those interested in correlating ancient Near Eastern backgrounds with the Hebrew Bible have needed a reference work like this. Sparks . . . has provided a volume that will be a mainstay in the field for years to come. . . . Sparks gives useful summaries of all major texts and includes extensive bibliographies that include texts and translations, as well as abundant secondary literature. . . . In addition to the bibliographies on specific individual texts each chapter concludes with a general bibliography on the genre under study. Reviewers have called the volume a 'staggering work in its scope that will be immensely useful to students of the Bible' and 'an indispensable companion to the volumes of translations that are already available.' This reviewer heartily concurs and recommends it as an ideal textbook for courses on ancient Near Eastern literature and Old Testament backgrounds."

"[Sparks] has opened up the wider world of ancient Israel by providing a wonderfully helpful and compact resource for comparative studies of the Bible and the ancient Near East (ANE). . . . Each genre is defined, exhaustively exemplified with attendant summaries, and provided with concluding observations. Some extremely useful factory options included at no extra charge are the multiple indices at the end of the book. . . . Another convenient addition facilitating further research is the extensive bibliography included at the end of each chapter. . . Sparks has achieved a thorough and long overdue compendium of the currently available ANE texts and the scholarship associated with them. In doing so, he has made possible for those pursuing a deeper understanding of the biblical texts a much broader understanding of the diverse literary traditions of those cultures surrounding ancient Israel that in turn provide insights into much of Israel's own literate heritage."

"Students of ancient Near Eastern literature have long needed a comprehensive, clear, and inviting guidebook to this large body of literature. Kenton Sparks has now provided just such a useful volume. The book includes maps, time lines, and other charts that will help students locate ancient works in time and space. The introduction to the work, written at a level that students should find accessible and engaging, works through issues of genre and setting for ancient texts. This chapter should be required reading for all beginners in Hebrew Bible studies, and even scholars will profit from the author's clearheaded take on genre as a way of thinking about texts. . . . Each chapter describes a series of texts and includes an extensive, up-to-date bibliography. . . . Sparks's judicious, moderate scholarship should commend itself to readers of varying theological commitments. Readers of this work may use it in several ways: beginners may wish to start with the introductions and conclusions of each chapter and then proceed to the detailed description of works within a given chapter. . . . Scholars and more advanced students will draw on the bibliographies and interact with the author's often stimulating analyses of texts. . . . It is difficult to fault Sparks at any point, for his survey of texts accomplishes more than its title implies. He has written nothing less than the best available introduction to the wide range of ancient Near Eastern texts."