Among the King's Soldiers 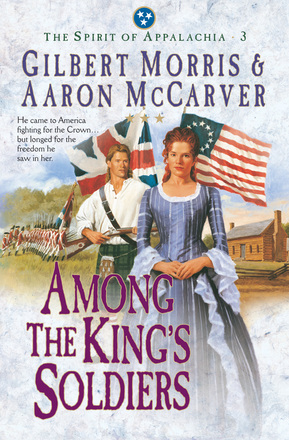 • Chronicles the story of the settlers of America's first frontier--the lands over the Appalachian Mountains--and of the faith that carried them through the harshest of times.

In Among the King's Soldiers, Sarah MacNeal is struggling with the death of Philip Baxter. Her stepbrother, Jacob Spencer, escorts her and her friend Amanda Taylor back across the mountains to Williamsburg to visit Jacob's grandparents. Here Jacob becomes embroiled in a struggle that finally forces him to decide his loyalty between the British and the patriots, and between the two women who have touched his heart.

Meanwhile, Sarah has met a Scottish highlander, Seth Donovan, who is fighting for the British. She has closed her heart to love but finds it very difficult to not become drawn to him. And Seth is struggling with his loyalty to the British crown and a deep longing for the freedom he sees in her life.

When they return to the frontier, they find that the war has reached there. In the Battle of King's Mountain, loyalties and love will finally be proven.