How Christian Nationalism Betrays the Gospel and Threatens the Church 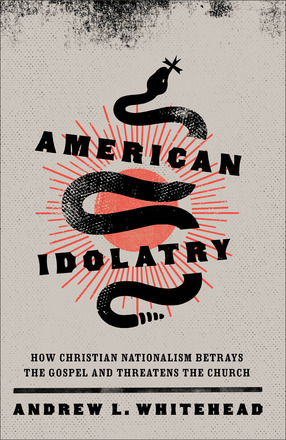 Whitehead shows how Christians harm their neighbors when they embrace the idols of power, fear, and violence. He uses two key examples--racism and xenophobia--to demonstrate that these idols violate core Christian beliefs. Through stories, he illuminates expressions of Christianity that confront Christian nationalism and offer a faithful path forward.

American Idolatry encourages further conversation about what Christian nationalism threatens, how to face it, and why it is vitally important to do so. It will help identify Christian nationalism and build a framework that makes sense of the relationship between faith and the current political and cultural context.

Contents
1. A Hollow and Deceptive Philosophy
2. What Is Christian Nationalism?
3. Turn the Other Cheek?
4. Do Not Be Afraid?
5. Lay Down Your Sword?
6. May Your Kingdom Come, on Earth as It Is in Heaven?
7. And Who Is My Neighbor?
8. Remaking American Christianity

"With a rare combination of sociological insight and pastoral concern, Andrew Whitehead has given us an invaluable field guide to recognizing the threat that Christian nationalism poses for the integrity of Christian theology and the health of American churches, particularly those that are predominantly white. This timely and practical book serves as a much-needed moral compass in these bewildering times in our nation's history."

Robert P. Jones, president and founder of Public Religion Research Institute; author of The Rivers Before Us: Finding America's Future by Reckoning with our Racial Past