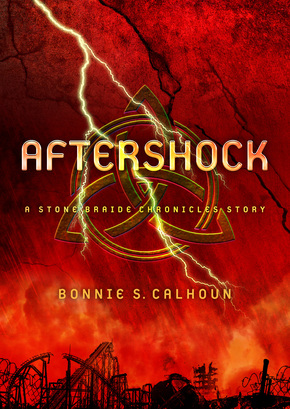 Selah may have escaped the Mountain, but the real danger has only begun

It's been two days since Selah Rishon Chavez escaped the Mountain with her father and dozens of other Landers who had been held captive there. Now it's time to move on to safety. But no one can agree on a safe route or even the final destination.

Selah's real problem, however, lies deep within. Ever since her first interaction with a Lander, she has been changing, and the changes go far beyond the mark just below her collarbone. As a novarium, she is destined to be the key to solving a 150-year-old mystery--making her Public Enemy Number One not just to the Company but to other Landers.


Bonnie S. Calhoun loves to write, but it doesn't make her happy unless there are the three Bs: body count, blood, and blowing things up. She is the author of Thunder, Lightning, and Tremors, all part of the Stone Braide Chronicles. Bonnie lives in a log cabin in the woods on fifteen acres and shares her domain with a husband, a dog, and two cats--all of whom think she is waitstaff.