A Lifelong Quest for Common Ground 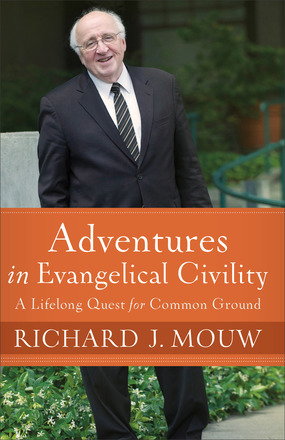 Richard Mouw, one of the most influential evangelical voices in America, has been on a lifelong "quest for commonness"--engaging with others in a positive manner and advocating for a "convicted civility" when conversing with those with whom we disagree. Through nearly half a century of scholarship, leadership, and ministry, Mouw has sought to learn from non-Christian scholars and other faith traditions and to cultivate a civility that is compatible with his Calvinist convictions.

In Adventures in Evangelical Civility, Mouw reflects on his almost fifty years of Christian public life, which provides a unique lens for understanding twentieth-century evangelicalism. He explores themes such as common grace, the imago Dei, and interfaith dialogue, offering a critical assessment of the strengths and weaknesses of what he has accomplished as a spokesperson for evangelical and Reformed perspectives.

Contents
1. Calvinists in an Edinburgh Pub
2. A Tale of Two Authors
3. A Many-Faceted "Imaging"
4. More Than "Calisthenics"
5. Lessons from the Philosophical "Moderns"
6. Commonalities in the Public Square
7. Preaching Civility
8. Depravity: Less Than "Total"?
9. Our "Direction-Setting"
10. Paying Attention to Context
11. Reformed and Evangelical
12. When Truth Is Distorted
13. On Being a "Public Intellectual"
14. Interfaith Engagements
15. Of Hymns and Dialogues
16. Concerns about the Journey
Index

"Richard Mouw's account of his 'adventures in Christian civility' is, for the reader, an adventure through American, evangelical, and ecumenical evolution between the last century and this one. It is written in the fullness of his voice--as a teacher and leader, a Christian public intellectual, and an immensely wise and gracious human being. Most importantly, it winsomely brings into relief the virtue of Christian humility with which he has walked the faithful, exacting intersection between the positions one holds and the way one treats kin, strangers, and enemies along the way. How grateful I am that Richard Mouw is in the world, and how glad I am that he has written this book."

"Fine gems often come in small packages. With graceful prose and elegant simplicity, Mouw draws on classical Calvinists, biblical scholars, Mormon leaders, recent historians, Catholic and Anabaptist theologians, and theist and atheist philosophers to explore the manifold links between common and particular grace. As the premier evangelical public intellectual of his time, Mouw finds a mandate squarely within historic Christian orthodoxy for 'convicted civility.' This mandate calls for a principled effort both to speak to other ears and to listen to other voices that have similarly sought to see the glories of God's self-revelation in the wider reaches of contemporary culture."

"Richard Mouw has helped many of us make sense of so much over the years. Now he gives us a fascinating and intimate portrait of how his own convictions were formed. It is a lively and spirited tale of his journey through studies in philosophy, theology, and political theory, interspersed with stories of ecumenical dialogues and important encounters with religious leaders from diverse traditions. In the evangelical community, no one has more effectively defended and encouraged bringing orthodox Christian faith into the public arena with civility and clarity than Mouw. As Christians face the ongoing challenges of living faithfully in public life, this book is an inspiring testament by a man who has served as a model to so many."

"Richard Mouw and I were walking together to a dinner meeting in Washington, DC, one evening when we realized we were lost. It took us an hour to get where we were going, and I consider that God's providence. I learned more in that hour's walk than I had in a long time, and I'm still quoting what I learned from Dr. Mouw that night. This book is much like that walk. You, the reader, will find here deep insight into important topics, told with a gleam in the eye, all at a brisk, entertaining pace. You will ponder what you read here often. Even on those few points when I as a reader would argue with Mouw (on Mormonism, for instance), he kept my attention and sharpened me in ways I hadn't anticipated. Richard Mouw's life, brilliance, experience, and prose are extraordinary. Read this book. You will be the better for having walked alongside such a humble genius."

"What a treat to wrestle with modernity alongside a first-rate theological mind! At a time when the culture wars frequently shut down civil debate and fill our public square with rancor, Richard Mouw offers a powerful antidote. His reflections on a lifelong encounter with the great thinkers of the modern age--aimed at understanding the burden and beauty of our common humanity--will edify and encourage believers and nonbelievers of all stripes."

Molly Worthen, assistant professor of history, University of North Carolina at Chapel Hill; author of Apostles of Reason: The Crisis of Authority in American Evangelicalism

"Richard Mouw's captivating exploration of both the Calvinist and the evangelical persuasions, and of the complicated relationship between them, is a marvel of understanding and sympathy to this reader who belongs to neither tradition. I am always informed by reading Mouw's work, and never more so than with Adventures in Evangelical Civility."

Alan Wolfe, professor of political science and director of the Boisi Center for Religion and American Public Life, Boston College

"No message is more valuable for American Christians, from both ends of the evangelical theological spectrum, than this robust, informed call to a renewed commitment to civility."

"Those with a specific interest in learning more about Mouw's theology of cultural and theological interaction in the public square, and those looking for insights for their own journey in this sphere, will find this memoir of interest."

"I love this book. Richard Mouw is an encouraging person, and this is an encouraging look at his life. . . . Mouw offers a memoir rather than an autobiography, and I am glad that he chose to do so. First, it allowed me to learn the difference, and second, that choice gave him the freedom to organize his recollections around topics and ideas, rather than chronology and events. . . . I do not always agree with Mouw, but I appreciate the fact that he is firmly convicted of his beliefs and firmly determined to be a unifier, divide-crosser, and brother to all who find their hope and joy in Jesus Christ, as well as a friend to all who bear the image of the eternal One. Mouw's memoir is a blessing that needs to be read by many, many people."

Before Dawn with the Son blog