Adam and the Genome 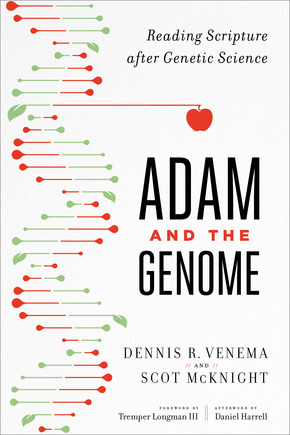 Genomic science indicates that humans descend not from an individual pair but from a large population. What does this mean for the basic claim of many Christians: that humans descend from Adam and Eve?
Leading evangelical geneticist Dennis Venema and popular New Testament scholar Scot McKnight combine their expertise to offer informed guidance and answers to questions pertaining to evolution, genomic science, and the historical Adam. Some of the questions they explore include:

- Is there credible evidence for evolution?
- Do we descend from a population or are we the offspring of Adam and Eve?
- Does taking the Bible seriously mean rejecting recent genomic science?
- How do Genesis's creation stories reflect their ancient Near Eastern context, and how did Judaism understand the Adam and Eve of Genesis?
- Doesn't Paul's use of Adam in the New Testament prove that Adam was a historical individual?

The authors address up-to-date genomics data with expert commentary from both genetic and theological perspectives, showing that genome research and Scripture are not irreconcilable. Foreword by Tremper Longman III and afterword by Daniel Harrell.

Contents
Foreword by Tremper Longman III
Introduction
1. Evolution as a Scientific Theory
2. Genomes as Language, Genomes as Books
3. Adam's Last Stand?
4. What about Intelligent Design?
5. Adam, Eve, and the Genome: Four Principles for Reading the Bible after the Human Genome Project
6. Adam and Eve of Genesis in Their Context: Twelve Theses
7. The Variety of Adams and Eves in the Jewish World
8. Adam, the Genome, and the Apostle Paul
Afterword by Daniel Harrell
Index

"Adam and the Genome is both hugely needed and splendidly written. Anyone who has wrestled with the notion that science is an obstacle to faith will benefit from its clarity and informed insight. I hope it's widely read inside the church--and out."

"Few topics generate greater passion among evangelical Christians today than the question of the literal accuracy of the biblical creation story. With the advances in science, we have two accounts of the origin of living beings--one scientific, the other scriptural--and many believe that they are mutually exclusive. Choose science or choose the Bible, we are told, but we can't have it both ways. This book, by two of evangelicalism's most articulate communicators--one a scientist, the other a biblical scholar--carefully considers whether that claim is true. The result is the most lucid and thorough discussion of the topic I have ever read. Dennis Venema marvelously explains genetic concepts by using everyday illustrations. Scot McKnight's approach is pastoral. In an awe-inspiring manner, he sensitively leads us into an appreciation of the biblical issues and shows us how theologically rich and intellectually satisfying they are. Because it is so clearly and carefully written, this book will mark a watershed moment in the history of evangelical Christianity. The radical distinction between two seemingly disparate positions ought to disappear forever, these authors show, as each position melds with the other to form one harmonious whole."

"This is an unlikely book. Who could imagine a geneticist and a New Testament scholar teaming up to write about Adam and Eve? We are fortunate that they did. Venema and McKnight address in a learned yet accessible way issues about which many of us have little understanding. We are indebted to them for giving us information and insights that enable us to think about human origins in ways that are both scientifically informed and grounded in a carefully nuanced interaction with the biblical text and early Jewish traditions. The church is well served by this sort of interdisciplinary collaboration, which assists us in both adapting and adopting Adam (and Eve) as interpreters have through the centuries."

"This is a unique and valuable book: an expert geneticist and a leading New Testament scholar come together to address questions of Adam and Eve. Venema and McKnight guide readers in an in-depth look at the genetic evidence for human evolution and at the views of Adam in the ancient Jewish world. As these two Christian scholars listen to each other, share their personal journeys on origins, and address the questions of evangelicals, their pastoral concern for the church and for students shines through. Not all readers will agree with their conclusions, but the book is essential reading for all who seek an understanding of human origins that respects both Scripture and God's creation."

"Anyone who doubts that Christian faith and evolutionary science can have a peaceful and fruitful relationship needs to read this remarkable book, a shining example of a complementary approach to science and religion in which both enhance, enrich, and complete each other. Dennis Venema offers indisputable scientific evidence for the evolution of living organisms, including humans, in a clear, accessible style. Scot McKnight deals with the challenging issue of whether Adam was a historical person. Drawing upon a wide range of creation accounts from the ancient Near East, and in particular ancient Jewish literature, he demonstrates that biblical passages on human origins and Adam must be read within their ancient milieu and context. I highly recommend this book."

"In Adam and the Genome, Dennis Venema and Scot McKnight provide us with a model of the kind of open conversations that need to take place between scientists and scholars of the Bible and theology. Dennis clearly explains complex scientific information in a way that nonscientists will be able to understand, and Scot wrestles with ways we might understand what the Scriptures say about Adam in light of both a high view of Scripture and an openness to scientific discoveries. All who realize that we cannot ignore scientific discoveries as we think about the Christian faith will be grateful for Dennis and Scot's partnership."

"The dismal history of Christian opposition to the relatively assured results of scientific discovery, and the impact on intelligent, scientifically savvy young people of what may appear to them to be a failure by Christians to face facts, should make us deeply grateful to faithful Christian scientists and biblical scholars who seek to take both the Bible and the scientific data with full seriousness. Dennis Venema and Scot McKnight provide a fine model of such an endeavor as they confront the compelling evidence for evolution in the human line, involving a group of thousands of early hominins, and its meaning for the biblical treatment of Adam and Eve. One may energetically disagree theologically or question aspects of the neo-Darwinian synthesis while still being informed and stimulated by this ambitious, irenic, and engaging treatment."

"Venema and McKnight offer a rare sort of work worthy of our attention, combining Dennis's ability to give clear, cogent explanations of the strength and motive force of the science behind biological evolution with Scot's winsome and coherent biblical, historical, and theological expositions. Their honest appraisals help us see how they have managed the challenges and opportunities of genomic science and presented a path for faithful commitment to biblical exposition. Even where the reader may disagree with some particular aspect, their work challenges us to examine the traditions and systems of exposition that have grown over time. In doing so, Venema and McKnight help us see that exegesis that fully engages scientific discoveries need not amount to a rejection of the Scriptures. They offer a viable way forward, inviting a broader audience into the conversation."

"Venema and McKnight expertly clarify the complexities of technical scientific data and a myriad of biblical and theological factors that must be addressed for coming to terms with evolution and the Christian faith. For evangelical faith to prosper rather than wither, the kinds of arguments outlined in this book will not only have to be taken with utmost seriousness but also embraced and accepted."

Peter Enns, Abram S. Clemens Professor of Biblical Studies, Eastern University; author of The Evolution of Adam: What the Bible Does and Doesn't Say about Human Origins

"The advantage of this volume is that we are treated to a way beyond 'the Bible or science' impasse by the joint efforts of a biologist (Venema) and a biblical scholar (McKnight), both of whom have impeccable scientific/scholarly and evangelical credentials. . . . For the foreseeable future, this book is a significant intervention in the convoluted space where modern science and biblical faithfulness meet, and I recommend it as a text for evangelical colleges and universities to be used not only in programs in the natural sciences but also in worldview, Bible, and theology courses."

Perspectives on Science and Christian Faith

"Dennis and Scot have collaborated on a wonderful book on the ongoing controversy (hopefully becoming more of a discussion) within Evangelicalism concerning biological evolution. Dennis lays out the genomic evidence, in a way that only trained scientists can, and Scot rehearses the well-known contextual issues and recurring questions that biblical scholars of both Testaments have been engaging for the past century and a half, and that need to continue to be engaged. Both authors are admirably honest in drawing their conclusion. . . . For those willing to put in the effort, this book is worth their time and may well open up doors and windows onto a deeper faith."

"Adam and the Genome is one of the more impressive evolutionary creationist works that I have read. Venema has a teacher's knack for making difficult concepts easier to understand through the use of familiar analogies. . . . Like Venema, [McKnight] is a gifted communicator who writes with sensitivity. . . . Venema and McKnight have written a significant work. Darrel Falk may be right in his endorsement of the book when he describes it as a watershed moment in the conversation about Scripture and evolutionary science. I expect that we will be talking about Adam and the Genome for some time to come."

"A book which very well may challenge previous assumptions Christians have concerning science, the Apostle Paul, and the Edenic story. . . . McKnight utilizes stellar scholarship and presents his conclusions with great writing skill and wit. If his conclusions are in fact correct, there are great implications and ramifications for the church and the way we view the Edenic story. . . . I recommend this book to any Christian who wants to honestly think about science in its relation to Christian faith."