A Tapestry of Light

This title might be available for $4.99 from your favorite retailer See other ebook specials 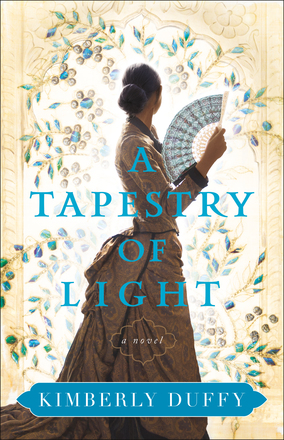 "[An] exceptional novel...From the picturesque falls of Upstate New York to stunning sites in India, Duffy shines in elegant, flowing prose and delicate precision."--Booklist starred review on A Mosaic of Wings

In 1886 Calcutta, Ottilie Russell is adrift between two cultures, British and Indian, belonging to both and neither. In order to support her little brother, Thaddeus, and her grandmother, she relies upon the skills in beetle-wing embroidery that have been passed down to her through generations of Indian women.

When a stranger named Everett Scott appears with the news that Thaddeus is now Baron Sunderson and must travel to England to take his place as a nobleman, Ottilie is shattered by the secrets that come to light. Despite her growing friendship with Everett, friend to Ottilie's English grandmother and aunt, she refuses to give up her brother. Then tragedy strikes, and she is forced to make a decision that will take Thaddeus far from death and herself far from home.

But betrayal and loss lurk in England too, and soon Ottilie must fight to ensure Thaddeus doesn't forget who he is, as well as find a way to stitch a place for herself in a cold, foreign land.

"The relationships between the Indians and the British, and those in-between, the Eurasians, are captured precisely. The novel is written lucidly in Ottilie's third-person point of view, and we feel her mental anguish at her mistreatments by the British in India and later in England. The skillful creation of Ottilie, who looks very Indian, and Thaddeus, who appears English, adds to the novel's conflict."--Historical Novels Review

"The authentic sights, sounds, and spice market flavors of nineteenth-century India come alive in Kimberly Duffy's highly anticipated sophomore novel. Readers are immersed in the exquisite embroidery trade of colorful Calcutta, and in the beauty of Victorian England, where heroine Ottilie must learn to find acceptance in both sides of her heritage. But it is through faith and forgiveness--and the gentle blossoming of love--that Ottilie finally finds the healing she seeks. A deeply researched and atmospheric novel, A Tapestry of Light is the beautiful escape readers will crave!"

Kristy Cambron, Christy Award-winning author of The Paris Dressmaker, and The Butterfly and the Violin

"Moving and beautiful, A Tapestry of Light not only takes you to India and England, but also engraves itself indelibly upon your mind and heart. A timeless story of hope and home, family and finding one's place. A soul feast!"

"A Tapestry of Light took me on a journey that began in vibrant, flavorful, cacophonous Calcutta in 1886, but it didn't end there. This immersive experience explores, through the character of Ottilie, the complexity of being both British and Indian, as well as the timeless dilemma of reconciling human suffering with a loving God. Duffy's writing is beautiful, deep, and contemplative. Tragedy haunts the characters but ultimately does not defeat them. Ottilie's spiritual journey is one of the most authentic I've ever read. Recommended for historical fiction lovers who appreciate the honest examination of loss and healing."

"A Tapestry of Light is an elegant treat for the senses threaded with delicate, thoughtful prose and lush locales. It is a treatise on faith and family as well as an exploration of belonging, and readers will find themselves transported to colonial-era Calcutta, thanks to Duffy's capable pen and inimitable passion for portraying India. Ottilie, our guide, is a strikingly memorable character balancing strength and sacrifice and certain to appeal to fans of Laura Frantz and Lori Benton. Duffy's deep research and refreshing settings, not to mention intelligent heroines, are a wonderful addition to inspirational historical fiction, and I cannot wait to see where she takes us next."

"A brilliant tapestry of historical detail, fresh characters, and rich, evocative truth. Duffy has a rare talent for bringing unique settings to life and layering stories with heart and authenticity. With a spiritual journey to savor, A Tapestry of Light speaks directly to the heartache of not quite belonging. A book you won't soon forget."

Joanna Davidson Politano, author of The Love Note and other historical novels

"The relationships between the Indians and the British, and those in-between, the Eurasians, are captured precisely. The novel is written lucidly in Ottilie's third-person point of view, and we feel her mental anguish at her mistreatments by the British in India and later in England. The skillful creation of Ottilie, who looks very Indian, and Thaddeus, who appears English, adds to the novel's conflict."