A Sword between the Sexes? 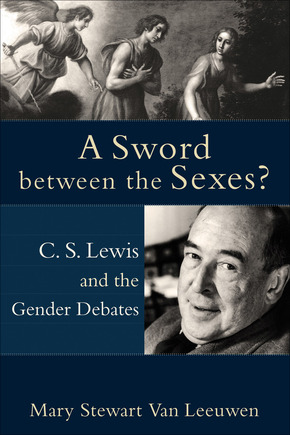 "Van Leeuwen's book is quite commendable. Her research is solid; she challenges the prevailing Christian hagiography about Lewis; she corrects some egregious errors in evangelical assumptions about gender using solid social-science research . . .; and she writes about things twenty-first century readers need to consider."--Laura K. Simmons, Cultural Encounters "There is, hidden or flaunted, a sword between the sexes till an entire marriage reconciles them. It is arrogance in us [men] to call frankness, fairness and chivalry 'masculine' when we see them in a woman; it is arrogance in them [women] to describe a man's sensitivities or tact or tenderness as 'feminine.'. . . Marriage heals this. Jointly the two become fully human."--C. S. Lewis (from A Grief Observed)

This statement and others like it in C. S. Lewis's later writings mark an extraordinary shift from his earlier and frequent defense of fixed gender roles and gender hierarchy. How did Lewis get to this point? And why have so many of his followers not better assimilated his final position?

This is the first book to provide a close examination of Lewis's understanding and presentation of gender. Mary Stewart Van Leeuwen evaluates Lewis's attitude toward the social sciences in the context of his slowly changing views on gender relations. She finds Lewis surprisingly prescient in his anticipation of the postmodern turn in the philosophy of science and surprisingly open, especially in his final works, to a more mutuality-based and generically human reading of gender relations. A Sword between the Sexes? addresses the tension between faith and science, suggesting how it may best be eased, and offers insight into the continuing debate over gender relations, egalitarianism, and complementarianism.

"This magisterial and constructive critique of C. S. Lewis reveals him as a sensitive commentator on some centrally important areas of human interaction. Lewis came to embody and think through multiple perspectives on human beings of all ages in their extraordinary complexity. The very social sciences of which he was so suspicious may both confirm his intuitions whilst correcting his mistakes. This valuable book breaks out of some of the Lewis-reading straightjackets and encourages us to see why he is still well worth our careful attention."--Ann Loades, honorary professorial fellow of St. Chad's College, and professor emerita of divinity, University of Durham

"Van Leeuwen's work is a valuable addition to the various books on C. S. Lewis. Respecting but not romanticizing him, Van Leeuwen explores Lewis's strengths, influences, and weaknesses, particularly as his writing deals with the relationships between women and men. This adds another excellent volume to Van Leeuwen's own work, taking Scripture seriously in conjunction with her own academic discipline, pressing us to affirm the love of God, and rejecting distorted views of gender."--Debra K. Block Clark, senior staff, InterVarsity Christian Fellowship

"This is a remarkable book. Not only does Van Leeuwen critique and explore the roots of C. S. Lewis's thought and belief, she does so as a woman who has herself been in the forefront of biblical feminist scholarship. The parallels between her own scholastic, familial, and cultural history and that of Lewis, and the search for authentic Christian wisdom are of great interest. The insights gained by the reader come not only from the life and times of C. S. Lewis but also from Van Leeuwen's deep understanding of the psychology of gender itself. I highly recommend this book for all Christians--male and female--who desire a richer awareness of our essential unity and communion as persons."--Diane Marshall, clinical director, Institute of Family Living

"A keen intellect and a rich academic background are necessary in tackling a substantive study of C. S. Lewis and gender, and Mary Stewart Van Leeuwen brings those resources and much more to her work. In this fascinating, careful, and probing examination, Lewis's views of gender and his relationships with women are discussed within their cultural, historical, and theological contexts. This book is wonderfully illuminating and important for C. S. Lewis fans and anyone interested in contemporary discussions of gender."--Christine D. Pohl, professor of social ethics, Asbury Theological Seminary

"In a fascinating chapter about her own relationship to C. S. Lewis, Mary Stewart Van Leeuwen lays all her cards on the table. Then she traces Lewis's changing views of gender step by step through his prodigious output of books and letters until the end of his life, considering not only his work, but the man himself, and the way he has been viewed by others. Van Leeuwen's spirit is generous; her prose, wonderfully clear; her arguments, powerful; and her insight, remarkable. Whether you're a scholar, a Lewis fan, or a general reader, you will find yourself turning pages with pleasure."--Jeanne Murray Walker, professor of English, University of Delaware

"This book is an eye-opener. For those of us who have been influenced by C. S. Lewis but have distrusted his views on gender, this book provides a welcome and carefully researched account of how Lewis changed his mind. It does not disguise the more hierarchical and essentialist material from the earlier years. Instead it takes us step-by-step through Lewis's encounters with women he respected, to the point where he was able to call his wife 'my trusty comrade, friend, shipmate, fellow soldier.'"--John Hare, Noah Porter Professor of Philosophical Theology, Yale Divinity School

"A Sword between the Sexes offers a definitive--even transformative--work on gender and faith. This astonishingly thorough book by Mary Stewart Van Leeuwen blends science, Scripture, logic, and sensibility in a manner reminiscent of C. S. Lewis's own best works. Without one shrill sentence or rhetorical declamation, she gently deconstructs Lewis's biases and the many mirrored repetitions of them throughout the evangelical subculture. It speaks to Van Leeuwen's grace that one finishes A Sword between the Sexes with no less love for C. S. Lewis. My hope is that views rooted in careful scholarship and scientific research continue to purify the way we imagine and experience gender in the church. I cannot imagine a better place for thinking Christians to start that journey than with A Sword between the Sexes."--Jon Trott, Jesus People USA

"Van Leeuwen's book is a provocative and thorough study of both Lewis the author and Lewis the man. While I suspect it won't prompt anyone in contemporary discussions to change their position, it should be read and considered carefully, for it serves an invaluable purpose: returning us to the man and his works to read them again with fresh eyes, new questions, and an openness to the possibility that one of the patron saints of evangelical complementarians may not be one at all."--Matthew Lee Anderson, mereorthodoxy.com

"The richness of this book lies not just in tracing Lewis' life. . . . The importance of the book lies in the way it develops the social context that formed Lewis' views. No one reads the Bible in a vacuum. He brought to his reading his unhappy childhood, his Edwardian views on gender and class, his academic interest in mediaeval literature, and his perception of the social movements of his day. The book therefore has interesting excurses into the history of child-rearing theories, divorce, and the psychology of gender."--Barbara Deutschmann, Zakok Perspectives

"A solidly argued work. . . . This is an important book. It provides the fullest discussion of Lewis and gender hierarchy that students of Lewis have. It at least answers Lewis on the topic of social sciences as well as (and probably slightly better than) he attacks them. It does not settle matters on Lewis's variety of Christianity, but it certainly contributes to the discussion."--Joe R. Christopher, Mythlore

"One of the strengths of A Sword between the Sexes is the in-depth assessment of the philosophical and historical roots of Lewis's views, partnered with a robust explication of what Van Leeuwen calls 'the psychology of gender.'. . . Van Leeuwen always does her homework, and this book is a trove of detailed research on how men and women are understood (accurately or not) in Christian and popular writings today, not just in Lewis's work. Van Leeuwen is careful to present opposing views. . . . Van Leeuwen's book is quite commendable. Her research is solid; she challenges the prevailing Christian hagiography about Lewis; she corrects some egregious errors in evangelical assumptions about gender using solid social-science research . . .; and she writes about things twenty-first century readers need to consider."--Laura K. Simmons, Cultural Encounters

"This study of gender relations in the life and works of C. S. Lewis . . . [is] the fruit of [Van Leeuwen's] long and distinguished career in academic psychology, which enables her to approach Lewis's work from a different angle than that of the literary experts and theologians who more habitually analyze his writings. . . . Some parts of Van Leeuwen's study are both original and enlightening. The connection made between Lewis's views on gender and his 'reluctance to affirm the relative but real value of empirically based social science' is extremely interesting, as is the whole section on Lewis and the social sciences. . . . Van Leeuwen's parallels between Lewis and Sayers are also illuminating, as is her detailed account of the relationship between Lewis and his former student Mary Shelley Neylan and of Lewis's comments about teaching a class of women at Lady Margaret Hall. Other high points are the sections on Lewis's understanding of Freud and Jung and on the pastiche, even tongue-in-cheek, qualities of some of Lewis's polemics."--Suzanne Bray, Seven: An Anglo-American Literary Review

"A Sword between the Sexes? is a gender-focused biography of C. S. Lewis--a dimension ignored by other Lewis biographers. Researched extensively and literarily keen, the work explores fascinating aspects of Lewis's world. . . . The value of A Sword between the Sexes? lies in the author's detailed exploration of Lewis's historical, social, and gender-conflicted milieu. With intelligent commentary and literary finesse Van Leeuwen's reconstruction of Lewis's personal growth through his relationships with women--most of all his wife, Joy Davidman--is masterful and well worth reading."--Tyce Jensen with J. Scott Horrell, Bibliotheca Sacra

"A Sword between the Sexes? is not only a serious, thorough exploration of C. S. Lewis' beliefs about gender; it is also a considerable study of sociological, philosophical, psychological, theological, and cultural perspectives on gender for the last one hundred years or so. Mary Stewart Van Leeuwen is an impressive scholar and persuasive writer. She is widely read in Lewis' complete oeuvre and in the social sciences generally. Throughout this book, she draws very careful conclusions about Lewis' changing views of gender. . . . Van Leeuwen covers a wide scope of content in her effort to create a comprehensive study of Lewis on gender."--Sørina Higgins, Sehnsucht: The C. S. Lewis Journal

"What Van Leeuwen . . . undertakes in her book is a necessary, if challenging task: to analyze Lewis's works identifying his views on gender, to identify the sources of those beliefs and opinions, and, finally, to determine their accuracy (or inaccuracy) based on Christian theology and the findings of the social sciences--and to accomplish all of this without either lionizing or demonizing Lewis. . . . Van Leeuwen takes a very balanced approach. . . . I found Van Leeuwen's book extremely well researched and readable. . . . Van Leeuwen has made a valuable contribution to both Lewis studies and women's studies."--Gary L. Tandy, Christian Feminism Today