by: Craig A. Boyd 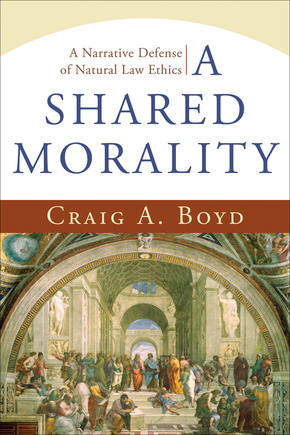 Morality based on natural law has a long tradition, and has proven to be quite resilient in the face of numerous attacks and challenges over the years. Those challenges are no less serious today, which leads one to ask if natural law is still a viable foundation for ethics.

Craig Boyd provides a contemporary defense of natural law theory against modern challenges from the arenas of science, religion, culture, and philosophy. In his analysis, he defends many of the classical elements of natural law, but also takes into account the contributions of scientific discoveries about human nature. He concludes that natural law is a necessary but not sufficient basis for ethics that must be accompanied by a theory of virtue.

"Craig A. Boyd's A Shared Morality makes an important contribution to the literature on natural law and the virtues. Boyd offers a cogent and historically grounded account of why common human morality is best conceived along lines provided by the natural law tradition. He offers a clear normative thesis but is fair-minded to opposing positions and aware of the need for further work on the topic. This book will be especially interesting to those interested in issues of relativism, moral reasoning, and cross-cultural morality. It should be read by ethicists, theologians, and anyone concerned about the moral foundations of human rights and the common good."--Stephen J. Pope, author of The Ethics of Aquinas

"Natural law advocates and virtue 'theorists' have largely ignored one another. In this book, Boyd develops a constructive engagement between these positions to which I hope philosophers and theologians will attend. If they are like me, they will learn much from this book."--Stanley Hauerwas, author of The Peaceable Kingdom: A Primer in Christian Ethics

"Craig A. Boyd has developed a contemporary version of natural law ethics, drawing more on sociobiology and current concepts of nature than on Aristotelian metaphysics. Yet he follows Aquinas on the good life by tying natural law to virtue ethics, which in turn leads to a divine command theory of moral obligation. Add this to his vigorous response to analytic moral philosophy and to scientific and postmodern criticisms, and the result is a splendid treatment of contemporary philosophical ethics. The exposition is both clear and competent, his research thorough, and the argument persuasive. It's a book I strongly recommend for teacher and student alike."--Arthur Holmes, professor emeritus of philosophy, Wheaton College

"An insightful account of natural law ethics, the view that ethical principles derive from the requirements of human nature. A prime obstacle to the acceptance of this type of ethics is that it transgresses the fact-value dichotomy. Boyd responds in detail to this objection, as well as to G.E. Moore's criticism of ethical naturalism. Although he defends natural law, Boyd holds that the classical version of that view as advanced by Thomas Aquinas cannot be accepted. . . . Boyd further criticizes other attempts to use evolutionary biology in ethics. . . . Natural law, Boyd argues, needs to be supplemented with virtue ethics. He also compares natural law to divine command ethics and addresses postmodernist and relativist criticisms. Boyd discusses an unusually wide range of material, and his challenging book is recommended for philosophy collections."--David Gordon, Library Journal

"The most novel approach of Boyd is to strengthen natural law by replacing the out of date ontology of Aquinas' theory with a contemporary reading of sociobiology. . . . While Boyd's vision for Natural Law is cause enough to purchase the book, he goes a step further and responds to many of the classic criticisms of natural law theory. . . . Boyd's book is a must read for the ethicist or student of Christian ethics for three main reasons. First he provides new life to a school of moral thought that many have written of as a dead end. Second, Boyd provides a series of skilled responses to the critics of natural law theory. These responses serve as both a defense of natural law and a counter critic of her critics. Last, this book is a wealth of information about the long history of natural law. . . . There is a lot to get excited about in A Shared Morality. . . . I look forward to watching Boyd's vision for natural law battle the waves of today's moral seas."--Monty M. Self, Christian Ethics Today

"[Boyd] produc[es] a modified theory of natural law ethics marked by disciplinary cross-fertilization. . . . His digests of contending positions and their spokespersons would be useful to those who are strong in one of the classics or the moderns, and who would welcome an entrée into the other idiom. Whether Boyd's final reworking of the theory represents a successful accommodation to the moderns, without yielding too much to them, is an open question that should motivate those interested in these issues to read this book."--Thomas C. Folsom, Religious Studies Review

"The deficiencies of competing theories of morality . . . have left the field open for a study of this kind, which seeks to integrate natural law and virtue ethics and to apply the combined result to a number of significant challenges in present day discussions. . . . [Boyd] plies his trade with expert precision, writing clearly, defining carefully, and illustrating appropriately. . . . The reader is given a helpful survey of the history of philosophy with a view to identifying those who developed a theory of moral nature in its theological sense. . . . [Boyd's] analysis of postmodernist relativism may be the most valuable chapter in the book. . . . For seminarians and pastors alike, this book can serve as an invigorating sympathetic-critical introduction to the natural law thinking of Thomas Aquinas. For those who are novice or seasoned students of natural law ethics, Boyd guides us in understanding the 'real' Thomist natural law, a helpful corrective for those attempting to read Aquinas through Enlightenment spectacles. . . . This is a book whose contribution to the discussion of natural law ethics is valuable for its clarity, and whose interaction with significant challenges to natural law ethics provides material for every tradition of moral reflection."--Nelson D. Kloosterman, Mid-America Journal of Theology

"Worth critical notice as [an] interdisciplinary and ecumenical [defense] of natural law. [The author] show[s] how natural law complements many influential movements in contemporary Protestant ethics. Boyd evaluates criticisms of natural law and judiciously updates the theory, showing its relevance to narrative and virtue ethics. . . . [The author is] to be commended for producing [a] clear and engaging interdisciplinary [defense] of natural law that recount[s] the natural law tradition and appl[ies] its principles to contemporary debates. Given the diverse topics surveyed, [this book is] of value to specialist and non specialist alike; [it] would be especially useful in advanced undergraduate or graduate courses on natural law, narrative and virtue ethics, or bioethics."--Christopher D. Jones, Studies in Christian Ethics