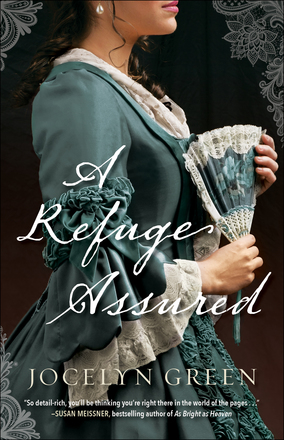 "A stunning story . . . . Green leaves no stone unturned in depth and detail and crafts a tale as passionate as the time period itself. A Refuge Assured and its enduring characters will leave you both speechless and satisfied by novel's end."
--Laura Frantz, author of The Lacemaker

Fleeing One Revolution to the Aftermath of Another, She Seeks and Dreams of Peace

Lacemaker Vivienne Rivard never imagined her craft could threaten her life. Yet in revolutionary France, it is a death sentence when the nobility, and those associated with them, are forced to the guillotine. Vivienne flees to Philadelphia, but danger lurks in the French Quarter, as revolutionary sympathizers begin to suspect a young boy left in her care might be the Dauphin. Can the French settlement Asylum offer permanent refuge?

Militiaman Liam Delaney proudly served in the American Revolution, but now that the new government has imposed an oppressive tax that impacts his family, he barely recognizes the democracy he fought for. He wants only to cultivate his hard-won farm near Asylum, but he soon finds himself drawn into the escalating tension of the Whiskey Rebellion. When he meets a beautiful young Frenchwoman recently arrived from Paris, they are drawn together in surprising ways to fight for the peace and safety for which they long.

"A stunning story. . . . Green leaves no stone unturned in depth and detail and crafts a tale as passionate as the time period itself. A Refuge Assured and its enduring characters will leave you both speechless and satisfied by novel's end."

Laura Frantz, author of The Lacemaker

"Green outdoes herself in this grand novel that instantly ranks as a must-read work of historical inspirational fiction. . . . Her characters and their predicaments are captivating, especially Vivienne, a female protagonist with both moral and political resolve. Green's writing is almost overwhelming in its sensory detail and very special power, and readers will remain breathless to the very end."

"The storyline is fast paced and has numerous unexpected twists and turns. . . . Jocelyn Green weaves her fiction with impeccable research and brings to life long-ago events that have been mostly forgotten."

"Green has written a complex, compelling historical romance that brings a less-familiar part of American history to life. Its themes of faith and perseverance will appeal to many readers of the genre."

"Green is the author of several historical novels that focus on everyday heroines thrust into key moments of conflict. Fans will not be disappointed in A Refuge Assured. Among the details of ordinary living, the novel threads insights about both the French and American Revolutions and conflict between central governmental rule and the rights of individual citizens."