100 Days of Living in the Hope of Eternity 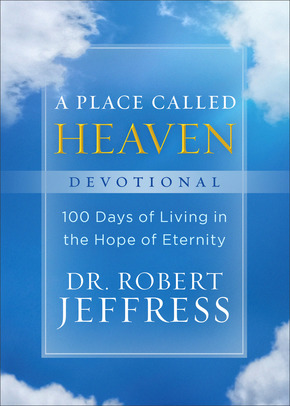 Bring eternity to mind every day

As Christians, we know someday we will leave our familiar country and be united with God in heaven. And yet many of us know very little about the place where we will spend eternity.

In his bestselling book A Place Called Heaven, Dr. Robert Jeffress opened the Scriptures to answer ten fascinating questions about heaven. Now he offers this devotional to help you think about heaven on a daily basis and put into practice the heavenly qualities of truth, honor, righteousness, purity, loveliness, character, excellence, and praise.

A Place Called Heaven Devotional includes one hundred devotions to elevate your thinking from earthbound concerns to heavenbound comforts. Each devotional includes reflection questions and a closing prayer to assist you in seeking the things above.


Dr. Robert Jeffress is senior pastor of the fourteen-thousand-member First Baptist Church, Dallas, Texas, and is a Fox News contributor. His daily radio program, Pathway to Victory, is heard on more than one thousand stations nationwide, and his weekly television program is seen on thousands of cable systems and stations in the United States and in 195 countries around the world. Known for his bold, biblical stands on cultural issues, Jeffress has made more than two thousand guest appearances on various radio and TV programs and regularly appears on major mainstream media outlets. He is the author of more than twenty books, including Courageous, Not All Roads Lead to Heaven, A Place Called Heaven, and Choosing the Extraordinary Life. He lives in Dallas.