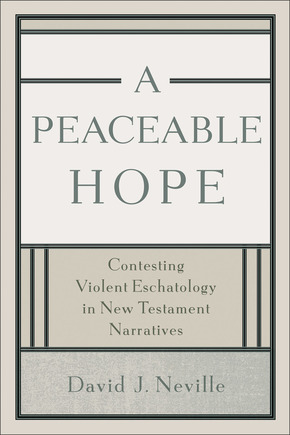 In the New Testament texts, there is significant tension between Jesus's nonviolent mission and message and the apparent violence attributed to God and God's agents at the anticipated end. David Neville explores that tension and challenges the ready association between New Testament eschatology and retributive vengeance on christological and canonical grounds.

Neville explores the narrative sections of the New Testament--the Gospels, Acts, and Revelation--with a view to developing a peaceable, as opposed to retributive, understanding of New Testament eschatology. He develops a "hermeneutic of shalom" for reading these texts and offers interpretive resources for grappling responsibly with them. Neville shows that for every narrative text in the New Testament that anticipates a vehement eschatology, another promotes a largely peaceable eschatology. This work for students and scholars of the New Testament and theology furthers the growing discussion of violence and the doctrine of the atonement.
Contents
Introduction
Part 1: The Gospels according to Matthew and Mark
1. Nonretaliation or Vengeance? Protesting Matthew's Violent Eschatology
2. Peaceful Power: Pleading Mark's Ethical Eschatology
Part 2: The Lukan Literature
3. The Evangelist of Peace
4. "As in the Days of Noah and Lot": Retributive Eschatology in Luke's Gospel
5. "In the Same Way": Restoration Eschatology in Acts
Part 3: Johannine Trajectories
6. Nonviolent Apocalypse: The Peace Witness of the Fourth Gospel
7. Apocalypse of the Lamb: Reading Revelation in Peace Perspective
Concluding Reflections
Index

"The notorious disjunction between the peaceable Jesus who commands love of enemy and the returning Jesus who brings punitive vengeance is here met head-on. Neville is historically honest, hermeneutically sophisticated, and personally candid. This is New Testament theology at its best and most helpful."

"In this lucid and resolutely honest discussion, David Neville examines the discrepancy that exists between Jesus's advocacy of nonretaliation and peacemaking in the gospel tradition and portrayals of eschatological judgment steeped in retributive violence. Neville navigates his way through this tricky territory with skill and sensitivity, respecting both the text's significant diversity and its enduring authority. Troubling texts remain troubling, but Neville's 'hermeneutic of shalom' provides an immensely useful way of acknowledging the problem without losing sight of the peaceable hope vouchsafed in God's nonviolent self-disclosure in Jesus Christ and undergirding the canonical trajectory as a whole."

"Neville's superb treatment of the disjunction between Jesus as inaugurator of peace and the imagery of judgment with violent retribution is thorough and judicious. Accepting eschatological judgment, he contends this does not negate God's Covenant of Peace as a definitive moral imperative for understanding Jesus's words and deeds in the Synoptic Gospels. John's apocalyptic eschatology (much realized) does not envision violent retribution; Jesus and the Paraclete promise peace amid persecution. Neville's careful research--laudably interacting in depth with current scholarship and interpretive discernment--contributes richly to a foremost moral issue in New Testament interpretation and Christian praxis. Infused and guided by peace and eschatological hope, this book is not to be missed!"

"With this latest book in the venerable Studies of Peace in Scripture series Neville joins the volatile and timely conversation regarding the presence of violence in the New Testament. The heart of Neville's study is the proposal that Jesus's nonviolent mission and message of peace serve as means to assess the faithfulness of the New Testament witnesses to that mission, in particular the evangelists and John of Patmos. All readers, even those restless with how much daylight Neville finds between a nonviolent Jesus and sometimes vengeful eschatologies of his New Testament witnesses, will benefit greatly from this rich storehouse of erudition, honest engagement with difficult biblical texts, theological and moral vision, and the transparent presentation of arguments and conclusions emerging from Neville's 'hermeneutics of shalom.'"

"Can there be divine judgment without divine vengeance and violence? Does NT eschatology undermine NT ethics? David Neville's detailed exegetical and hermeneutical study of the Gospels, Acts, and Revelation makes a valuable contribution to these important questions. It is a manifesto for, and a demonstration of, a hermeneutic of peace."

"For those concerned about the apparent conflict between Jesus's vision of peace and God's retributive judgment, Neville provides a very thorough, carefully nuanced examination of the relevant texts in the four Gospels, Acts, and Revelation, and develops thoughtful hermeneutical guidelines from this process."

"This study of the Gospels, Acts, and Revelation refuses to banish one set of texts in favor of the other. It affirms God's prerogative to judge even as it takes Jesus' incarnation, life, and teachings as primary determinants for character sketches of the God who will judge. Neville models a conversational, honest, and sometimes confrontational approach to reckoning with theological tensions and morally contradictory crosscurrents within particular biblical books and across the New Testament as a whole."

"This is an important and thoughtful book that tackles a challenging issue in New Testament interpretation, namely, how to reconcile the gospel portrayal of Jesus as a teacher and exemplar of peace and nonviolence with texts that present Jesus as returning at the end of time as a vengeful, violent judge. Neville . . . engages this question in a thorough and competent manner. . . . This is a fine study that makes a genuine contribution to a theology of peace grounded in the New Testament."

"At times NT authors present Jesus as an 'advocate of peace and practitioner of non-retaliation' but at other times they depict him as 'a violent avenger.' Such is the conundrum David J. Neville confronts in this provocative analysis of the Gospels, Acts, and the Book of Revelation. This compelling study offers a way forward for readers wanting to make sense of these seemingly contradictory emphases."

"Building on some of the illuminating work done in [the Studies in Peace and Scripture] series, Neville takes the discussion on peace and violence in the NT to a new level. . . . The key contribution of the work I see is his rigorous textual analysis of the operation of the Christological criterion in many NT narrative texts, as well as the statement of the criterion itself (which also arises from the texts). . . . The book is also exemplary for the way Neville conducts his exegesis--its attention to detail and interaction with important scholarship and an unbendable honestly (again and again you hear him genuinely questioning his own positions and subjecting them to finer analysis). I also found his argument about the theological incommensurability of divine eschatological violence and Jesus' peaceful mission persuasive. . . . I applaud Neville's thought-provoking work that surely deepens our appreciation of the phenomenon of peace-violence tensions in the NT."

"Neville offers both an exegetically-historically astute and a theologically-morally articulate argument. . . . Guided by an interpretive commitment that is both ethically engaged and exegetically rigorous, this book makes a significant contribution to the study of peace and violence in Scripture."

"Neville's book is unique, an excellent treatment of this vexing topic. . . . Neville commendably succeeds in interpreting texts of apparent eschatological violence to cohere with 'a peaceable hope.' I appreciate Neville's contribution and his masterful interaction with current scholarship."

"The author is consistent in his ethos of shalom but also honest when he struggles with the challenges along the way. . . . Neville has presented a thought-provoking synopsis of eschatological texts in the NT narratives. . . . A valuable resource for anyone concerned with ethics of Christian eschatology."

"A Peaceable Hope deserves the widest possible readership--not only for its scholarly excellence, but also for the palpable message it conveys in what is probably one of the most ambivalent and conflicting issues in the NT. It is also a timely corrective for current end-time literature."

"[A] provocative work. . . . The volume . . . challenges every reader to rethink their pre-understandings about the meaning and application of crucial texts about final judgment in the Gospels, Acts, and the Apocalypse. Whether or not one comes down precisely where Neville does, the exercise will prove beneficial. And even if one stops just a little short of some of the sweeping pro-pacifism conclusions of the author, one will have to admit that a careful handling of the texts leads to a synthesis much closer to Neville's than to the typical conservative Christian 'shoot-em-up' mentality!"

"What do the NT eschatological visions reveal about the character of God and the ethics that cohere with that theology? Are eschatological visions of retributive violence consistent with the teachings of Jesus on the one hand and with a theology of peace on the other? A Peaceable Hope is Neville's most substantial contribution so far to these questions. . . . This is a delightful, intriguing, and well-argued book. . . . [This] fine contribution . . . needs to be taken seriously in any investigation of NT eschatology with regard to peace, nonviolence, and the character of God."

"[Neville] painstakingly examines the eschatological passages, weighing the hermeneutical options and deconstructing the traditional interpretations that buttress visions of divine violence, and constructs a logical structure for a nonviolent (even an anti-violent), peace-filled eschatological scenario. Neville has done his homework with thorough, critical research. . . . Neville reinterprets the passages depicting eschatological violence in light of cultural, linguistic, and/or rhetorical understandings, all the while holding firmly to the common thread that runs through the entire Bible--the divine desire and goal to reconcile and restore creation to God through Jesus, to bring Shalom on earth."

"Neville's study is an important contribution to the exegetical and hermeneutical discussion of NT eschatology and ethics from a peace-centered perspective. His writing is clear, his argumentation is easy to follow, his exegesis is detailed and careful, and his interaction with current scholarship is thorough. To his great credit, in arguing his thesis Neville does not try to find solutions where there are none. He engages with difficult texts honestly, and neither shies away from them nor tries to brush them aside with inadequate reasoning. A further strength of this study is Neville's repeated emphasis on the significance of Jesus himself, in his life and teaching, to NT ethics. . . . A Peaceable Hope is a noteworthy example of biblical scholarship, which is both academically rigorous as well as relevant to the life of the everyday Christian. For those interested in the interaction between NT eschatology, ethics, morality, and particularly peace theology, this book is highly recommended."