by: Rodney A. Whitacre 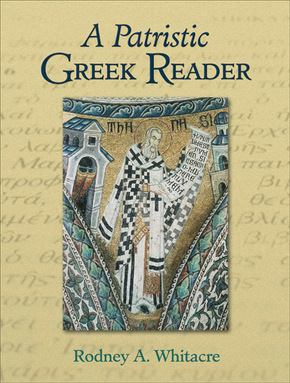 The heart of this book is a selection of Greek texts from early Christian writers, accompanied by notes so that a person with one year of Greek can read the texts. Basic translations of the texts are also provided so that readers can check their work. A list of words used 50+ times in the New Testament and the principal parts of several verbs is included.

The Greek selections represent a variety of styles and levels of difficulty. The notes also vary, with very extensive notes provided in some cases. Passages that have played a major role in the history of Christian thought are included, as well as passages that contribute to matters of spirituality and pastoral care. Several passages are of more purely historical interest. The author includes an introduction to the writings of the early church to help orient readers to the writings of the Fathers in general and also give the rationale for the particular selections included in the book. Each selection also has a brief introduction discussing its historical setting and content. A brief bibliography is included for the particular selections included and for the Greek reference works cited. However, the book would also be of interest to those studying the Classics and could be used by anyone as a brief introduction to some samples of early Christian thought. This may be the only book available that provides such translation notes for selections from the Greek fathers.

"This is more than a book. It's an opportunity to learn Greek from a superlative teacher and to learn Christianity from the greatest ancient masters. . . . Readers will get a generous sampling from the earliest Christian generation, the Apostolic Fathers, and from key figures such as Justin, Athanasius, and Chrysostom--but also from lesser-known but fascinating saints such as Melito of Sardis, Clement of Alexandria, and the Desert Fathers and Mothers. [Whitacrd] provides meticulous annotation for difficult words and disputed readings. Even those who have little interest in learning Greek will benefit from the volume's ample introductory material, including a helpful 'Approach to Reading the Fathers,' and its excellent translations of every Greek text. Also useful are the appendices that review the basics of Koine and point to good resources for further study. The Spirit has been leading the churches to 'return to the sources,' and A Patristic Greek Reader, a model of both pedagogy and mystagogy, is a beautiful beginning for that journey."--Touchstone

"A helpful and well-organized tool for those who wish to study patristic texts. . . . The two goals of the book are to provide an introduction to the rich legacy of the fathers and to offer further reading to those who have studied biblical Greek and wish to continue their exercise in the language. Both goals are successfully achieved. . . . The book concludes with a short bibliography indispensable for beginners who wish to learn about available dictionaries, lexicons, grammars, syntaxes of Greek, as well as bibliographical references to the Greek and English texts, translations, and studies on patristic authors and their writings that are presented in the book. . . . The principal value of the book is in its notes, which accompany the Greek texts at the bottom of each page. The notes are intended to enable the student to read the passages without constantly consulting the dictionary. . . . In terms of its production, this book is excellent. The paperback edition is affordable, and the Greek texts with the notes are easy to follow. The choice of the length of texts and the concurrent notes will fit well for individual reading by a beginner or for a guided group reading in a seminar course. In sum, the book is an important and happy sign that there is a growing interest among students and young scholars in patristic literature. I recommend it to every teacher of intermediate Greek and for students who wish to discover the richness of early Christian literature not only in modern languages but even more profoundly in the originals."--Bryn Mawr Classical Review

"A needed introduction to the Greek Patristic writings. . . . The volume contains some standard texts . . . but it also contains texts that were previously not as readily accessible (or only found in editions . . . with no grammatical help). . . . Furthermore, by including a number of short selections by a variety of authors, this volume includes a wide variety of genres and writing styles reflected throughout the patristic tradition. . . . The editor has also provided a great service to the reader by indicating references to Scripture in bold type. This allows the student to become acquainted with the ways in which patristic authors used and adapted Scripture for their own contexts. The editor has included a full English translation of the texts at the end of the book. This is particularly helpful because several of these texts do not exist in easily accessible translations."--Restoration Quarterly

"For those involved in teaching advanced Greek courses aimed at students who have mastered New Testament Greek this is a splendid resource to extend the range of grammatical skills as well as broadening the encounter with a variety of texts. The helps offered to users are well thought out and facilitate rapid progress in developing language skills without doing all the work for students. This is a very helpful volume for either class-based courses or for individuals seeking to extend ability with Greek language."--Journal for the Study of the New Testament Booklist

"A wonderful resource for students wishing to move beyond first year NT Greek and gain experience with early patristic writings. Whitacre offers selections from fifteen different texts, each of which contains a brief introduction placing the work in context. Students will encounter new vocabulary, navigate through unfamiliar (and at times difficult) syntactical terrain, as well as discover how broad the semantic range of once-familiar NT terms can be. Whitacre's grammatical notes are particularly valuable: words are parsed and translated, the nuances of verbal aspect are explained, and participles are occasionally classified. Whitacre's cross-referencing system is also helpful."--Religious Studies Review

"A true gem. . . . [Whitacre] has written and edited a work which provides for every student of the ancient Greek language (who has progressed beyond first year) direct, guided, and useful access to a goodly number of excerpts carefully culled from some of the leading lights in patristic Greek literary firmament. In so doing, Prof. Whitacre has rendered a profound service, yes, even a blessing, to all who wish or need to venture beyond the confines of the Greek NT in their effort to become acquainted with key figures in church history, the history of Christian doctrines, or the development of the Greek language. . . . This is a text designed to introduce the reader to the Fathers of the Greek-speaking church and to help students of the language improve their Greek skills. . . . [Whitacre] has succeeded more than admirably on both counts. . . . It is a distinct pleasure for me to be able to recommend this book to its intended audience in the strongest possible terms. Thank you, Prof. Whitacre, for bestowing this gift on the Greek-reading public, students and instructors alike!"--Kelly T. Osborne, Master's Seminary Journal

"[An] unusual and extremely useful work. . . . What is so refreshing about this collection is the obvious fact that it does not make one of two false assumptions, either that only Biblical Greek is worthy of the attention of serious students or that classical Greek is the only type of Greek worthy of the name. . . . The selection of texts is extremely wide and imaginative. . . . Each author's work is preceded by a useful introduction telling the reader something of the life and writings of the author under review and of the context of the writing in question. . . . The notes to the Greek text are very full and helpful and should be of great help to the translator."--Anthony Meredith, SJ, Faith