A Matrix of Meanings 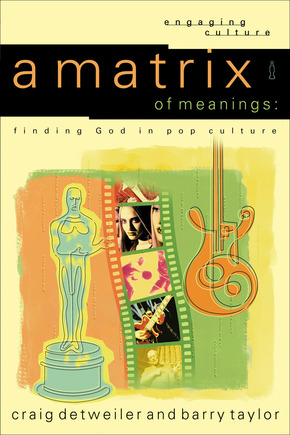 "An important book for those in ministerial positions as well as scholars interested in the reciprocal relationship between popular culture and religion. . . . [A] witty and passionate call for the church to engage popular culture in a dialogue that will benefit both discourses."--Dan W. Clanton Jr., Religious Studies Review

From the glittering tinsel of Hollywood to the advertising slogan you can't get out of your head, we are surrounded by popular culture. In contrast to some traditional Christian responses, which have been to shun aspects of popular culture, Craig Detweiler and Barry Taylor offer an insightful treatise on its value in A Matrix of Meanings: Finding God in Pop Culture.

Rather than offering a theology for pop culture, as some recent commentators have, the authors create a constructive theology out of pop culture. Instead of passing judgment on popular culture the authors analyze its elements and ask "What are they doing?"What do they represent?" and "What do they say about the world in which we live?" Rather than deciding whether Bono, Britney, and the cast of "Friends" deserve our admiration, Detweiler and Taylor ask what the phenomena of celebrity idolization means. They do not examine whether Nike's "Just do it" campaign is morally questionable; instead, they ask what its success says about our society.

A Matrix of Meanings can be read in at least three ways: as a study of the marketplace driven by consumerism and fueled by advertising, whose highest aspirations are attained in celebrity; as a study of isolated artistic forms--music, movies, television, fashion, sports, art--and what they may tell us about our world, ourselves, and our God; and as a broad survey of our culture that reveals trends that cross art forms. These cultural shifts, studied in the marketplace and manifested across pop cultural forms, create a lived theology that reveals the very nature of Christ and his kingdom.

"Most of us look to pop culture to comment on how bad it is and how countercultural we need to be. A Matrix of Meanings takes us a few levels deeper to find a surprising and provocative search for spiritual meaning in places we would never expect. This book helps us get connected."--Robert Webber, Myers Professor of Ministry, Northern Seminary

"Popular culture has become the environment in which we live, move, and have our being. The authors of this analysis and evaluation have the advantage of being professional practitioners--one in music, one in filmmaking--as well as acute observers of popular culture. One does not have to agree with all their judgments or responses to commend this book as the most insightful and stimulating recent Christian study of the subject."--Robert Banks, director and dean, Macquarie Christian Studies Institute, Sydney, Australia

"At first glance, a book claiming that 'God shines through even the most debased pop cultural products' might be dismissed as misguided, irreverent, or even sacrilegious. Yet if we are willing to take seriously the authors' call to 'look closer,' we might actually find that they are right--that the rise of pop culture may well be one of 'the most profound, provocative, exciting expressions of legitimate spiritual yearning in at least one hundred years.' So while not losing sight of Paul's injunction to concentrate on what is pure, noble, and right, let us follow Detweiler and Taylor's lead and 'join the theologizing already occurring within popular culture.' In so doing, we just might be drawn deeper into the mystery of the God we proclaim and perhaps even discover an unanticipated connection to the postmodern generation God is calling us to serve."--Stanley J. Grenz, author of A Primer on Postmodernism

"Moaning about the evils of pop culture is a favorite pastime among American Christians, both liberal (who usually prefer high culture) and conservative (who prefer subculture). Their kind of moaning might raise amens and money from older and younger fogeys, but it generally turns Christians into crotchety grumps. If you want a strong antidote to religious grousing about pop culture, read A Matrix of Meanings. Taylor and Detweiler cast a deeper look at pop culture and see plenty of divine fingerprints. Their kind of writing will turn Christians into engaged agents of the gospel."--Brian McLaren, pastor (crcc.org), author, and fellow in emergent (emergentvillage.com)

"This exciting book is long overdue. Christians live in the same everyday world as everyone else but struggle to relate their faith to it, while the theological experts who are supposed to help them generally dismiss popular culture as unworthy of serious reflection. Detweiler and Taylor have put everyone in their debt by not only affirming the intrinsic importance of pop culture but also reflecting theologically on it. This is one of very few books to treat popular culture and theology with equal seriousness, and its breadth of coverage means it is probably destined to become the definitive work in its field. In fact, for those Christians who are less informed than they would like to be, this would make an excellent crash course in pop culture, combined with an insightful theological analysis of it all. Detweiler and Taylor know how to challenge without being destructive and cynical. This is practical theology at its very best."--John Drane, author of The McDonaldization of the Church

"An invaluable guidebook for navigating pop culture. Read this book and you too can keep the promise of Psalm 101:3: 'I will set no worthless thing before my eyes.'"--Steve Tompkins, producer, The Simpsons, The PJs, and The Bernie Mac Show

"[This book] can serve as a basic introduction and defense of postmoderism. But it's more of a call for the church to be discerning, thoughtful and adaptive, rather than hopping on the latest bandwagon. The analysis is deep and wide, covering "The Simpsons," extreme sports, Fight Club, body piercing, Moby, celebrity idolatry, reality TV and even the world of advertising."--Kevin D. Hendricks, CCM

"If you need a book that'll help you navigate the always changing and highly influential world of pop culture, this book is a must have. Tackling subjects like movies, television fashion, advertising, sports, and art, the authors make sense of where culture has been, where it's heading, and what the trends and changes mean for the ministry. The book is witty, factual, and easy to read. Definitely worth buying and digesting."--Youthworker

"Craig Detweiler is uniquely equipped to examine the intersections of faith and culture."--Dick Staub, ChristianityToday.com

"A different perspective on what's going on in culture. You may or may not agree, but you should read it."--2prophetu.com

"[Detweiler and Taylor's] discussion ranges insightfully through engagements with advertising, music, movies, television, fashion, sports, art--in short, through the everyday world surrounding us in this century. . . . This study is responsibly documented, suitable for college classes in theology, American studies, even visual and graphic arts. Lucid and fast-paced, with chapters subdivided into short sections and prefaced with interesting quotations, it will also serve the general or lay reader. It is heavy enough for university libraries and light enough for a thinking reader at the beach."--Science and Theology News

"Rather than issuing another clarion call for Christians to be counter-cultural boat rockers regarding all things modern, and therefore sinful, Detweiler and Taylor offer some surprising insights into the search for spiritual meaning for those willing to be fully engaged in the world in which we live."--Phil Anderson, Topeka Captial-Journal

"A Matrix of Meanings takes seriously the relationship between popular culture and theological reflection. . . . Detweiler and Taylor explore a tremendous variety of cultural products that ultimately tell us much about western society in the twenty-first century."--John S. Vassar, Perspectives in Religious Studies

"Perhaps the main strength of the book [is] not the ubiquitous call to pastors and theologians simply to tell the Christian story in the cultural lingua franca, but to listen carefully enough to hear culture's search for God and to allow that search to shape our theology. . . . Like it or not, Detweiler and Taylor's positive engagement with culture is badly needed after a century where, at least among evangelicals, the church has often taken the posture of an encircled battalion in a culture war, Bastogne-like, a bastion of besieged believers, content to do little more than throw grenades over the wall and wait for deliverance."--Brad Harper, Cultural Encounters

"Detweiler and Taylor approach their engagement with pop culture from a reverse hermeneutic. . . . Some may find this approach disturbing; however, I found it refreshing from the typical approach that most Christians have engaged culture. I also found that their approach was quite thought provoking. . . . Their goal is not to approve immorality but to discover what God might be saying to his people though pop culture. . . . I would recommend A Matrix of Meaning as a book that will challenge its readers to approach pop culture with a posture of an explorer instead of a cynic. Readers will gain knowledge of various pop culture elements and discover an interesting methodology of engaging it. This book is intended for Christian workers and students, both undergraduate and graduate. . . . This book would be an excellent secondary textbook for an upper level undergraduate or graduate cultural studies course. It provides a wonderful example of a methodology of exploring and engaging culture."--Jonathan C. Grenz, Journal of Youth Ministry

"Each chapter does a thorough job of looking at the history of the topic under consideration, i.e. how we got to the current status quo; then thoughtfully dissects the current postmodern situation with glimpses into several examples. Finally, each chapter looks to that situation for theological insight and clues as to how religion works for postmoderns and how churches can address postmoderns. None of it is glib, overly rosy, nor formulaic. The authors offer some tough insights about the whys of postmodern culture. The insights come with considered reasons and ample, cogent research. . . . I intend to use this book next time I teach our Advanced Homiletics class, with the intent of giving some cultural awareness and depth to the various homiletic models that the class covers. The book would also be quite workable for discussions of multi-cultural preaching, which often focus mostly on various ethnic and racial contexts while overlooking the generational divides."--Richard C. Stern, Homiletic

"This engaging work is a welcome addition to Baker's successful 'Engaging Culture' series. . . . This is an important book for those in ministerial positions as well as scholars interested in the reciprocal relationship between popular culture and religion. Let us hope that those with ears to hear will listen to the authors' witty and passionate call for the church to engage popular culture in a dialogue that will benefit both discourses."--Dan W. Clanton, Jr., Religious Studies Review

"In an ongoing struggle to understand the complex relationship between Christianity and popular culture, Craig Detweiler and Barry Taylor have made a significant contribution with Matrix of Meanings. . . . They propose an ambitious reconsideration of theology that is driven by an honest and insightful look at the way popular art, cinema and media reveal a deep and driving hunger for the divine."--Science & Theology News

"This book is truly a delightful read. . . . The book is nicely illustrated with interesting pictures and cartoons and is replete with popular culture references that demonstrate a broad knowledge of its different aspects--historically, culturally, and theologically. . . . [The authors'] breadth and analysis of popular culture is impressive and broadly focused. This book would be of interest to anyone interested in the topic of popular culture from within the Christian tradition, whether lay persons, students, or scholars. . . . The authors' openness to the prospect of popular culture as an important phenomenon for religion to understand, their grappling with postmodernity, and their generous reading of popular culture texts as religious and spiritual should challenge many of us to reconsider the role that popular culture both does and should play in Christian theology."--Donna Yarri, Ethics & Medicine