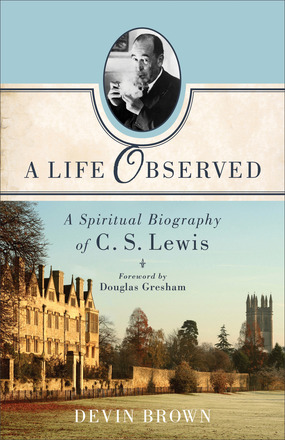 C. S. Lewis is one of the most influential Christian writers of our time. The Chronicles of Narnia has sold more than 100 million copies worldwide and all Lewis's works are estimated to sell 6 million copies annually. At the fiftieth anniversary of his death, Lewis expert Devin Brown brings the beloved author's story to life in a fresh, accessible, and moving biography through focusing on Lewis's spiritual journey.

Although it was clear from the start that Lewis would be a writer, it was not always clear he would become a Christian. Drawing on Lewis's autobiographical works, books by those who knew him personally, and his apologetic and fictional writing, this book tells the inspiring story of Lewis's journey from cynical atheist to joyous Christian and challenges readers to follow their own calling. The book allows Lewis to tell his own life story in a uniquely powerful manner while shedding light on his best-known works.

"This book has the essential quality of a biography--it's reliable."

"Devin Brown has always been my go-to source for all things related to Middle Earth and Narnia. In A Life Observed he shows us Lewis's remarkable journey from hardened skeptic to one of the most joyful, thoughtful, and influential apologists in the history of Christianity. Like Lewis, Devin is a pleasure to read, and you can't help but feel a little smarter--and a little happier--when you finish this book."

"[This] is the story of Jack's real and true life--not the mere flash of the firefly in the infinite darkness of time that is our momentary life in this world, but the one he left this world to begin--and how he came to attain it. Brown helpfully works his way through the dross and difficulties of Jack's earthly life in search of every factor, every influence, every event, and all of the people who showed Jack where the narrow path lay and taught him where it led. . . . I grew up with Jack as my guide. This real Jack whom I knew walks the pages of this book."

Douglas Gresham (from the foreword)

"Lewis believed that Christianity was first and foremost about experiencing God in one's life. . . . Quite appropriately then, Brown's biography recounts events from Lewis' life and quotes from his books, letters, and diary in order to tell the story of his spiritual journey. And it's a fascinating tale, especially when one considers that Lewis was not always a Christian. . . . Fans of Lewis will find much here to savor. So, too, will those interested in a man's lifelong attempt to live out his faith."

"[Brown] chronicles Lewis's journey from atheist to Christian, tracing Lewis's lifelong search for his mysterious object of desire--joy. He provides a close reading of Lewis's writings and an examination of Lewis's friendships with J. R. R. Tolkien and the rest of the literary circle known as the Inklings. . . . [This book] perform[s] the task that all critical books should and also plant[s] a desire in readers to pick up and read Lewis's own work. . . . [It] illuminate[s] this gifted author, whose passion for good writing and deep desire to bring pleasure to readers make his work timeless."

"Brown is especially adept in explaining Lewis's famous argument for God's existence from the experience of Joy. . . . Brown shows . . . that Lewis regarded Joy as the foundational quality of every well-lived human story."

"[This book] offers an accessible, well-constructed study of Lewis's long road to Christ that is punctuated with original insights and perspectives. . . . Brown also perceptively spots the hand of providence in Lewis's life. . . . Brown is particularly effective at explaining Briticisms to an American audience and at tracing Lewis's movement from idealism to impersonal theism to personal theism to Christianity."

"A welcome recent addition to the spate of Lewis biographies is Devin Brown's A Life Observed. . . . Brown is a thorough researcher, and he uncovers new items I hadn't encountered before. . . . Brown offers a concise summary of Lewis's external life, but the focus is upon what was happening in Lewis's mind and heart. . . . As Brown shows in his biography, it was a major milestone in Lewis's spiritual journey when he learned to focus less on himself and to turn his mental gaze outward."

"This book is different. It is the story of Jack's real and true life--not the mere flash of the firefly in the infinite darkness of time that is our momentary life in this world, but the one he left this world to begin--and how he came to attain it. Brown helpfully works his way through the dross and difficulties of Jack's earthly life in search of every factor, every influence, every event, and all of the people who showed Jack where the narrow path lay and taught him where it led."

"[An] excellent and welcome [addition] to the field of Lewis scholarship. . . . What Brown does so expertly is narrowly focus his book to examine the larger influences which Lewis himself assumed were so apparent that he did not give them the full attention they deserved. . . . Brown's treatment of C. S. Lewis's life and spiritual influencers is a beautiful (and occasionally poetic) piece of work. . . . [This book] help[s] us to better know the true, good, and beautiful man whose influence is still being felt decades after he thought he would be forgotten."

"There have been many biographies written about C. S. Lewis, but Devon Brown has taken a quite different path in A Life Observed. . . . Brown has given us a unique perspective on the spiritual life of one of the best known and most beloved Christian apologists. . . . A Life Observed is well written and well researched; it is an enjoyable read and one that gives both aficionados and neophytes in Lewisania a unique perspective."

"This book . . . will be very helpful to Brown's target audience of newer Lewis readers. Engaging and well-researched, it does an impressive job of probing Lewis's unusual spiritual journey, a winding path that led him from atheism to a powerful Christian faith and to his position as one of the most popular and articulate Christian writers of the last hundred years. . . . Besides providing the key biographical highlights of Lewis's life, this book also presents helpful overviews of many of Lewis's major works. A final function this book may serve is to help readers confront some of the same spiritual questions Lewis struggled with during his long conversion and throughout his influential Christian life."

"As Lewis noted many times throughout his life, his conversion was . . . one of consistent seeking, of long discussions with valued colleagues, of coming 'kicking and screaming' into the presence of God to become a 'reluctant convert.' This is the fascinating angle from which Lewis scholar Dr. Devon Brown chooses to approach Lewis in his newest biography. . . . This work makes a close examination of what I believe is one of the most important facets of C. S. Lewis's life--his turning to Christ and acceptance of Christian doctrine. . . . [Brown] skillfully weaves various quotes and reflections from Lewis's works into the narrative, illustrating how Lewis's works were directly influenced by many of his life experiences. . . . One of the many strengths of Brown's biography is its readability. . . . He presents his subject matter in a clear, thought-provoking way. This biography would, in no way, confuse or intimidate the average reader. It is both an enjoyable and instructional read. . . . [Brown] has been a celebrated Lewis scholar for many years, and therefore, serves as a trustworthy guide for Lewis's spiritual journey. I urge you to add this book to your Lewis collection. It truly is not just 'another Lewis biography' but a crucial exploration into the spiritual aspects of Lewis we perpetually find so fascinating."