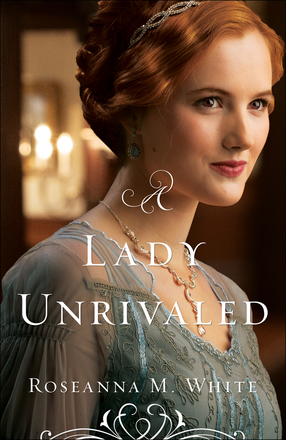 Amid the Unforgettable Cotswolds, the Final Grasp for the Fire Eyes Diamonds Could Threaten Them All

Lady Ella Myerston can always find a reason to smile--even if it's just in hope that tomorrow will be better than today. All her life everyone has tried to protect her from the realities of the world, but Ella knows very well how the dangerous Fire Eyes diamonds have haunted her brother and their friends, and she won't wait for peril to strike again. She intends to take action . . . and if that happens to involve an adventurous trip to the Cotswolds, then so much the better.

Lord James Cayton has already broken two hearts, including that of his first wife, who died before he could convince himself to love her. Now he's determined to live a better life . . . but that proves complicated when old acquaintances pull Cayton into their desperate attempt to seize the jewels. He does his best to remove the intriguing Lady Ella from danger, but the stubborn girl won't budge. How else can he redeem himself, though, but by saving her--and his daughter--from those intent on destroying them all?


Praise for the Ladies of the Manor series

"Readers who are fans of Downton Abbey will love the scenes divided between the upper crust and the downstairs staff and the interplay between those two very different worlds."--RT Book Reviews review of The Lost Heiress

"With the momentum and drama of a modern thriller and the charm and intrigue of an Edwardian upper-class romance, [The Reluctant Duchess] balances . . . family history with highly entertaining situations and plenty of humor." --Booklist starred review

"White finishes her Ladies of the Manor series with flourishes of adrenaline, wit, and simmering heat, proving again her mastery of historical Christian romance. Set in the picturesque Cotswolds of England, 1913, this is a true Edwardian saga. . . .Readers will be kept guessing through the final page, thrilled by the butterflies of Ella and Cayton's courtship and abuzz in the series' heart-pounding finale."

"Though the book works as a standalone, reading it as part of the entire Ladies of the Manor trilogy will provide more context and elicit deeper affection for the characters. This conclusion to White's Downtonesque drama will delight readers and sadden fans who have grown attached to such engaging, lovable characters."

"The interplay of the characters draws readers right into the story, and the mystery of who is after the Fire Eyes and why comes to an exciting conclusion. Lady Ella is a headstrong, fun heroine who is easy for readers to root for throughout the tale. The interaction between Ella and Cayton is comical at times, and tender at others. Fitting end to a wonderful series."

"Demonstrating White's excellent eye for historical detail and a deftness at creating suspense, this final book in her Edwardian series doesn't disappoint. The author is well equipped to write a swoon-worthy romance capped off with a satisfying finale. Suggest to fans of Carrie Turansky and Julie Klassen."

"The finale to the Ladies of the Manor series adds to White's credit as a crafter of Edwardian romances. The rich settings, the intrigue, and the characters that readers have grown to love all come together in a satisfying conclusion."