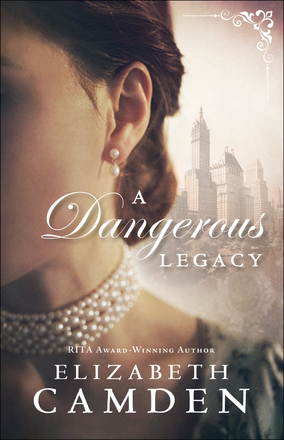 "Camden is the master of historical inspirational romance..."--Booklist

Telegraph operator Lucy Drake is a master of Morse code and has made herself a valuable asset to the Associated Press news agency. But the sudden arrival of Sir Colin Beckwith at rival British news agency Reuters puts her hard-earned livelihood at risk. Colin is talented, handsome, insufferably charming--and keeping a secret that jeopardizes his reputation.

Despite their rivalry, Lucy can't deny that Colin has the connections she needs to give her family an edge in the long legal battle they've been waging over their rightful inheritance. But when she negotiates an unlikely alliance with him, the web of treachery they dive into proves to be far more dangerous than they ever could have known.

"With her gifts for writing setting, characterization and history, Elizabeth Camden gives readers of her newest novel a fascinating glimpse behind the scenes of turn-of-the-century rival news agencies. . . . But amid the relatable characters and intriguing history, Camden also introduces readers to the other side of the era--corruption, insane asylums and the tenements--and raises social awareness that can be applied to the world today. "

"Camden weaves together a delightful story of intrigue and love against the backdrop of turn-of-the-century New York City. . . . Camden makes it easy to visualize the setting, whether it's New York City streets, the Western Union Telegraph building where Reuters and the Associated Press are housed, the crowded apartment buildings, or the comfortable estates. Readers will get a thrill out of reading this lovely historical romance."

"Elizabeth Camden weaves a tale of love and intrigue in New York City circa 1903. . . . Readers will root for these two characters in a kisses-only romance that is as highly interesting as it is entertaining."