A Bride in the Bargain 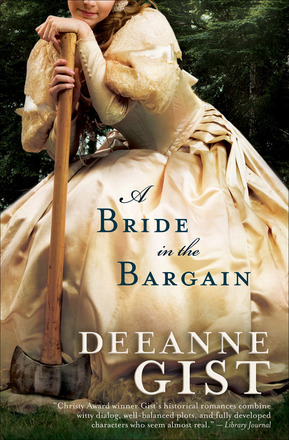 In 1860s Seattle, a man with a wife could secure himself 640 acres of timberland. But because of his wife's untimely death, Joe Denton finds himself about to lose half of his claim. Still in mourning, his best solution is to buy one of those Mercer girls arriving from the East. A woman he'll marry in name but keep around mostly as a cook.

Anna Ivey's journey west with Asa Mercer's girls is an escape from the griefs of her past. She's not supposed to be a bride, though, just a cook for the girls. But when they land, she's handed to Joe Denton and the two find themselves in a knotty situation. She refuses to wed him and he's about to lose his land. With only a few months left, can Joe convince this provoking--but beguiling--easterner to be his bride?

"Anna Ivey's journey west in 1865 with Asa Mercer's girls is an escape from the grief of her past. She is not supposed to be a bride though, just a cook for the girls. But when they land in Seattle, she is handed to Joe Dalton to be his bride. He needs a wife or he will lose his land. With only a few months left, can Joe convince Anna to be his bride? Even though the attraction is growing between these strong characters, their problems seem insurmountable. Anna believes she is sudden death to anyone she loves because everyone in her family told her so just before they died. Here is a delightful romance replete with plot twists as well as inspirational messages about prayer, humility, and courtship. This particular book won a Christy Award for the author. Rating: 3"
--MF, Libraries Alive

"In 1865, the land of Seattle, Washington Territory, belongs to landowners with wives: a married man can acquire 640 acres of timberland, but bachelors don't even get half that. Lumberjack Joe Denton's land is threatened when he can't prove he was married and that his wife died before making the trek West to join him. To ensure his rights, he reluctantly buys a Mercer bride--an eastern orphan brought out West by Asa Mercer.

"At nineteen, destitute and alone, Anna Ivey doesn't realize she's signed on for marriage; she only wants passage out West and a job as a cook. When she reaches Seattle and learns the truth, she refuses to marry Joe, jeopardizing his land and business. Joe must convince Anna to marry him before it's too late, and Anna must convince Joe only love will induce her to marriage.

"With her usual spiritually fulfilling yet comical and sassy prose, Gist has once again written a delectable Christian romance. The setting, characters, and plot meld so well with historical detail that everything comes alive and one is swept away by the story. This is definitely one of Gist's best, and I hope she continues enthralling her readers with well-balanced, engaging stories."
--Rebecca Roberts, Historical Novels Review, Issue 50, November 2009

"Gist takes intriguing historical facts and creates a world of fascinating characters, lighthearted moments and timeless crises that we can still relate to today. The characters are refreshing, the setting is vivid and the plot will keep you turning the pages. A keeper!

"SUMMARY: Burdened with the guilt over the death of her parents and brother, Miss Anna Ivey vows to never let anyone get close to her. But a dangerous situation forces her to leave Massachusetts and agree to travel northwest to cook for a lumberjack, Joe Denton. The trip is treacherous, and she's disappointed by Seattle. Then she learns that Denton doesn't want a cook, but a wife, so that he can keep his land. Refusing to marry, she stays in his home as a cook but soon falls for her boss. But is he wooing her for love or for land?"
4 1/2 stars
--Jennifery Reyes, Romantic Times Book Reviews, June 2009 (TOP PICK)