Resources for a Church Confronting Capitalism, Democracy, and Postmodernity 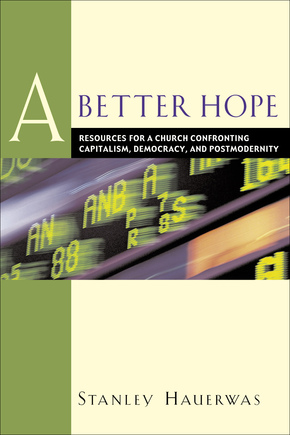 "In A Better Hope, we find Hauerwas at his best. . . . His ability to deconstruct those ideas we hold more sacred than we should makes him indispensable to the current theological dialogue."--Scottish Journal of Theology

By his own admission never one to duck a good fight, Stanley Hauerwas has in the past three decades established himself as one of our most important and most disputatious theologians. With A Better Hope, he concentrates on the constructive case for the truth and power of the church and its faith, "since Christians cannot afford to let ourselves be defined by what we are against. Whatever or whomever we are against, we are so only because God has given us so much to be for."

Never boring and often telling, A Better Hope demonstrates how a thinker so often accused of being "tribal" and "sectarian" is at the same time one of few contemporary theologians read not just by other theologians, but by political scientists, philosophers, medical ethicists, law professors, and literary theorists.

"Stanley Hauerwas is always provocative, regularly funny, and right more often than his critics will ever admit. His pacifism implies no objection to vigorous intellectual combat. As Shakespeare put it, "Once more into the breach, dear friends."--William Placher, Wabash College

"Engaging and provocative. . . . Those who know Hauerwas will enjoy this, and those who don't may consider it a fine way to become acquainted with his thought."--Publishers Weekly (Dec. 2000)

"The irrepressibly high-spirited ethicist of Duke goes inveighing again, gleefully tossing polemical darts at the three villains of his subtitle. He acknowledges that there is little in these essays that he has not said before and often, but he believes he must be as persistent as are the ills that he attacks. Capitalism and democracy as defined--his critics would say caricatured--by Hauerwas are certainly deserving of attack, and his crafty postmodernist critique of postmodernism does not fail to charm. This is also an occasion to welcome Brazos Press, a new imprint of Baker Book House."--First Things

"This is a book for theologians who know at least some of the territory, but it also has important things to say to all Christians seeking insight into postmodernism, globalisation and how the church can respond. . . . I am convinced that Christians living in Western culture are soon going to have to find ways to join together in specific acts of resistance to the barrage of media-mediated globalised capitalism. Hauerwas helps us to think about what those acts might be."--Anabaptism Today

"In A Better Hope, we find Hauerwas at his best. He is a true servant of the church as he pulls back the curtain on issue after issue to reveal ways we have capitulated in efforts to make church more palatable. He shows us our shame. And in this vein we must ask him to continue to overturn rocks and shine his insight in the dark corners of our theological world. His ability to deconstruct those ideas we hold more sacred than we should makes him indispensable to the current theological dialogue. We can only assume that this keeps us listening and coming back for more."--Scottish Journal of Theology

"A fruitful way of reading Stanley Hauerwas' latest rendering, A Better Hope, is to read it as a statement concerning the present state of the discipline of Christian Ethics--as an analysis of the discipline's dominant character and an account of what it would mean if it embraced its genuinely theological dimensions. In other words, A Better Hope gives clear indication of what Hauerwas thinks is wrong with how Christian Ethics is usually 'done,' and what it would take for it to be done rightly."--Christian Ethics Today

"Both interesting and challenging--in style as well as content. It is thought-provoking, often contentious but far from conclusive."--Themelios

"Hauerwas offers believers much that is worth pondering. . . . Perhaps Hauerwas's work, along with similar works, will encourage debate within the churches that will create opportunities for building a distinctly Christian subculture that can effectively challenge this world's assumptions."--Fred Smith, Philosophia Christi

"Stanley Hauerwas has a reputation for saying openly the outrageous things that others only imagine, and as America re-examines its values and motivations in the aftermath of September 11th 2001, this publication is especially timely. . . . It goes without saying that, of course, he does have a good deal of common sense to share. Moreover, he writes in a way that is readily accessible. He has a rare ability to make full use of stories and anecdotal material, while engaging with the world of scholarship, and his copious endnotes are a masterpiece in themselves."--John Drane, Theological Book Review; Feed the Minds

"Ranging over a wide variety of topics, Hauerwas demonstrates why he is one of the most provocative (in every sense of the word) theologians in America today. . . . That he goes against the cultural and theological steam is more than evident. That we have much to learn from him should be equally evident."--Wayne C. Stumme, Trinity Seminary Review

"Hauerwas, never shy with his critiques, offers up a sharply drawn account of the churches abuse of secular idealism in shaping its own inner workings. Though critical in nature, A Better Hope offers valuable insights from a theologian who has led the ethical revolution on how the church may impact, while itself not be impacted by secular society. . . . For those who desire a refreshing new approach to the church's interaction with society, Hauerwas will certainly not disappoint."--Bradley L. Selan, Ashland Theological Journal

"[A] riveting collection of essays. . . . Most will either find themselves standing up and cheering, or sitting quietly, pondering provocatively written words."--Relevant