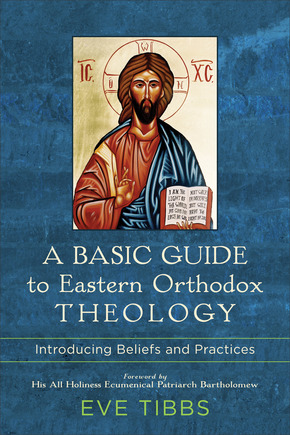 Eve Tibbs offers a comprehensive yet accessible introduction to the beliefs and practices of the Eastern Orthodox Church for Western readers. Tibbs has devoted her career to translating the Orthodox faith to an evangelical audience and has over twenty years of experience teaching this material to students. Assuming no prior knowledge of Orthodox theology, this survey covers the basic ideas of Eastern Orthodox Christianity from its origins at Pentecost to the present day.

Foreword by His All Holiness Ecumenical Patriarch Bartholomew
Preface
The Origins of This Book
The Intended Audience for This Book
How This Book Should Be Read
Introduction
Assumptions and Terminology
The Approach
Change?
1. The Orthodox Christian Worldview
"Returning" to the Unknown Ancient Church?
The Orthodox Church in the Christian World
East Is East and West Is West
The Primacy of Worship
Come and See!
"Doing Theology" in Orthodox Christianity
2. The Church
Joined Together in the Church
What Is the Church? Where Is the Church?
The Orthodox Church Today
What Is "This Rock"?
One, Holy, Catholic, and Apostolic
3. Communion and Revelation
What Holds the Orthodox Church Together?
Communion and Conciliarity
Holy Tradition
The Eikōn
Holy Scripture
Holy Icons
4. Ministry and Leadership
The Royal Vocation of All People
First among Equals
Three Orders of Clergy
Ordination of Women
Apostolic Succession
5. Christology
The Word of God Is a Person
Who Is Jesus?
Early Challenges to Christology
The Rule of Truth
Error and Heresy
Christology and the Ecumenical Councils
Singing Theology
6. Who Are We? What Are We to Do?
Created for Communion
Tragedy in the Garden
Being Saved
Theosis
All Creation Rejoices
Humanity, We Have a Problem
The Cross and Resurrection
7. The Holy Trinity
The Revealed Trinity
Trinitarian Taxis
The Cappadocian "Settlement"
The Holy Spirit
The Church as an Icon of the Trinity
8. Orthodox Worship
Liturgy
An Earthly Heaven
Relevant and Ancient
The Holy Mysteries
Sin, Confession, and Reconciliation
Epilogue
Appendix: Excerpts from Selected Apostolic and Patristic Writings
Excerpts from the Epistle of St. Ignatius to the Philadelphians
Excerpts from the Epistle of St. Ignatius to the Smyrnaeans
Excerpts from Against Heresies 3.3 by St. Irenaeus, Bishop of Lyons
Full Text of The Didache: The Lord's Teaching through the Twelve Apostles to the Nations
Glossary of Orthodox Terms
Index

"Inviting, informative, inspiring! This primer on Eastern Orthodox theology by Dr. Eve Tibbs is much more than a textbook. A Basic Guide to Eastern Orthodox Theology is an invitation into the mysteries and beauty of this ancient yet ever-renewing and living tradition. It is full of useful 'insider' information about the Church and its vibrant spirituality. Throughout, Tibbs hospitably compares Orthodox theology and tradition with its Protestant and Roman Catholic counterparts. An indispensable guide for all students, ministers, and instructors."

"It is rare to find a female Orthodox theologian, let alone one that teaches at a leading Protestant evangelical seminary! Dr. Tibbs's years of teaching evangelical students have enabled her to write a basic but effective introduction to the beliefs and practices of the Eastern Orthodox Church and its relationship with the Protestant and Catholic traditions. Her experience dealing with common questions and misconceptions that evangelicals often have makes this book a valuable text for students and teachers alike."

"An Orthodox Christian with years of experience teaching evangelical students--Eve Tibbs is an ideal person to explain the fundamentals about the life, ethos, and faith of the Orthodox Church. She has written an accessible yet substantial book on Orthodox Christianity. I hope that her readership will include not only inquirers and converts to Orthodoxy but also 'cradle' Orthodox as well--anyone seeking to understand the basics and beyond."

"Dr. Eve Tibbs combines her considerable professional engagement with Western Christian thought and theology with her personal background and experience to present a fresh approach to Orthodox Christianity. This book is concise and readable yet sufficiently informative and detailed to serve as a solid introduction to the Eastern Orthodox Faith. Tibbs does not limit herself to simply explaining differences in doctrine and practice between Orthodoxy, Catholicism, and Protestantism. She provides effective examples and real-life stories that illustrate how Orthodoxy has maintained an entirely distinct character and history, which cannot be understood within the framework of the typical Catholic-Protestant dichotomy and debates. She presents Orthodoxy and its most important claim--of a direct and unbroken continuity with the ancient, historical Church--not as a relic of the past but as a vibrant faith community with its own beliefs, practices, mode of thought, and way of life. Orthodoxy has too often been misunderstood as an exotic form of Catholicism or dismissed as a cult of dead, ritualistic observance. This book serves to dispel those misconceptions and promote better understanding between Christians."

"Because this book was 'born' in classes attended mainly by evangelical Protestant theological students at Fuller Theological Seminary, Eve Tibbs's A Basic Guide to Eastern Orthodox Theology wonderfully shifts from being an introduction to and apologetic for Eastern Orthodoxy to being a comparative study in dialogue with Western Christianity. Her engaging text reveals a fluency with both Orthodox theological sources--the extensive footnotes will lead readers deeper into many topics--and Protestant and Roman Catholic sources. Throughout the book, she presents the liturgical and patristic texts of the Christian East, demonstrating not only that these historical texts are sources for Orthodox theological study but also that they live within the hearts of today's Orthodox churches and people."