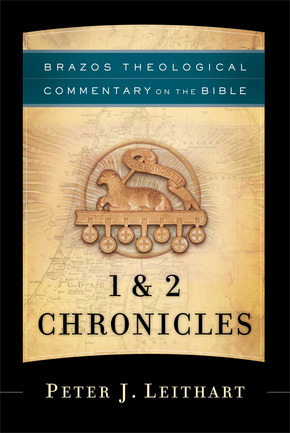 In this theological reading of 1 and 2 Chronicles, Peter Leithart uncovers the narrative logic of Chronicles, highlights the role of music and government in Israel and in the church, and shows how Judah's history moves from the world of the monarchy to the postexilic world in which Israel is scattered among Gentiles.

The Brazos Theological Commentary on the Bible series encourages readers to explore how the vital roots of the ancient Christian tradition inform and shape faithfulness today. As with other volumes in the series, this commentary is designed to serve the church--providing a rich resource for preachers, teachers, students, and study groups--and to demonstrate the continuing intellectual and practical viability of theological interpretation of the Bible.

"Leithart has established himself as a sensitive, close reader of the biblical text who is guided by the richness of the Christian theological tradition. This commentary is an adroit and refreshing attempt to weave together these two talents."

"With his customary flair, Peter Leithart opens up both the structure and the typology of 1 & 2 Chronicles, offering significant assistance to any preacher who seeks to proclaim the good news from this difficult text. Leithart is especially illuminating regarding the Chronicler's theology of music and the implications of that theology for the practice of worship. By demonstrating the centrality of worship to the narrative of Chronicles, Leithart also shows the coherence of the entire narrative. This commentary will be a helpful addition to the library of any pastor, especially those responsible for the worship life of their congregations."

"Leithart does an excellent job of working through the text of Chronicles systematically while at the same time consistently weaving the major themes of his interpretation. . . . Leithart also engages faithfully with literary and historical features that shape the narrator's records. The approach is a healthy balance between remaining in the focus text and bringing broader theological understanding to bear. . . . Leithart's commentary is a helpful addition to the existing works on Chronicles both for the academy and the pastorate."

"This is a fine example of a commentary designed to help those who simply want to gain some insight into a biblical book without having to encounter questions or problems that tend to be of interest only to specialists."