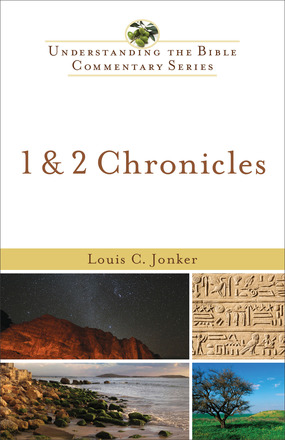 Expert help for understanding the Bible

Each volume in the Understanding the Bible Commentary Series breaks down the barriers between the ancient and modern worlds so that the power and meaning of the biblical texts become transparent to contemporary readers. They present a careful section-by-section exposition of the biblical books with key terms and phrases highlighted and all Hebrew transliterated. Notes at the close of each chapter provide additional textual and technical comments for those who want to dig deeper. A bibliography and Scripture and subject indexes are also included.

Louis C. Jonker explores and synthesizes recent developments in the scholarship on 1 & 2 Chronicles for modern readers, allowing them to understand the message and theology of these books that have too often been seen as mere repetition of other Scripture. He reads Chronicles as literature that negotiates a new socioreligious identity in a period of political transition, expertly relating it to readers living in the twenty-first century.

Louis C. Jonker is professor in Old Testament at Stellenbosch University, South Africa. As a fellow of the Alexander von Humboldt Foundation (Bonn), he has done research at the University of Tübingen on numerous occasions. In his research on literature of the Second Temple period, he focuses on the relationship between history writing and identity negotiation. He has edited various volumes on this topic and has published extensively on the biblical books of Chronicles.