Written on the Wind 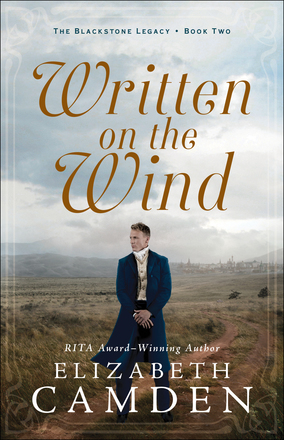 He carries a dangerous secret, but can he survive long enough to expose it?

Count Dimitri Sokolov has been charged with overseeing construction of the legendary Trans-Siberian Railway, but during this work, he witnesses an appalling crime, the truth of which threatens the Russian monarchy. In an effort to silence him, the czar has stripped Dimitri of his title, his lands, and his freedom . . . but Dimitri has one asset the czar knows nothing about: his deep and abiding friendship with Natalia Blackstone.

Natalia is the lead analyst for her father's New York banking empire and manages their investment in the Trans-Siberian Railway. Her bond with Dimitri has flourished despite the miles between them, but when Dimitri goes unexpectedly missing, she sets the wheels in motion to find him. Once they join forces, they embark on a dangerous quest in which one wrong move could destroy them both.

From the steppes of Russia to the corridors of power in Washington, Dimitri and Natalia will fight against all odds to save the railroad while exposing the truth. Can their newfound love survive the ordeal?

"Written on the Wind is a sweeping saga of a historical romance, enhanced by complex characters and riveting period detail. A fascinating read."--MIMI MATTHEWS, USA Today bestselling author of The Siren of Sussex

In Written on the Wind, Camden smashes genre conventions and expectations with a dazzlingly unique hero and a taut and tense unearthing of a historical moment rarely covered in fiction. As complex as a Brahms motif, this treatise on home and sacrifice is deftly intercepted by a startlingly smart and rich love story woven with the potential to change the course of history. Jubilant descriptions and richly textured banter underscore Dmitri and Natalia's poetry of a relationship while tempering the barren wastelands of Russia with the crackle of New York's shifting and bustling industry. Camden's reigning voice in dimensional and indomitably researched historical romance reaches its zenith in this work of rare impression. This book is nothing short of a game-changer, and I eagerly await how its elevated discourse on the strengths and limitations afforded two singular and wonderful characters will ripple through the Christian fiction industry for years to come.

Stretching from Gilded Age New York to the wilds of pre-revolutionary Russia, Written on the Wind is a sweeping saga of a historical romance, enhanced by complex characters and riveting period detail. A fascinating read.