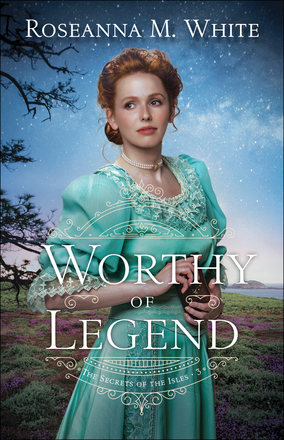 After a summer of successful pirate-treasure hunting, Lady Emily Scofield and her friends must hide the unprecedented discoveries they've made, thanks to the betrayal of her own family. Horrified by her brother, who will stop at nothing to prove himself to their greedy father, Emily is forced to take a stand against her family--even if it means being cut off entirely.

Bram Sinclair, Earl of Telford, is fascinated with tales of King Arthur and the Knights of the Round Table--an interest he's kept mostly hidden for the last decade. But when a diary is unearthed on the islands that could lead to a secret artifact, Bram is the only one able to piece the legends together.

As Bram and Emily seek out the whereabouts of the hidden artifact, they must dodge her family and a team of archaeologists. In a race against time, it is up to them to decide what makes a hero worthy of legend. Is it fighting valiantly to claim the treasure . . . or sacrificing everything in the name of selfless love?

"The chemistry between Emily and Bram is electric and makes for a resolution that will satisfy. . . this has plenty of charm."