Who's Afraid of Relativism? 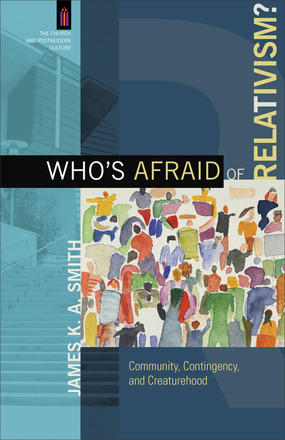 Many Christians view relativism as the antithesis of absolute truth and take it to be the antithesis of the gospel. Smith argues that this reaction is a symptom of a deeper theological problem: an inability to honor the contingency and dependence of our creaturehood. Appreciating our created finitude as the condition under which we know (and were made to know) should compel us to appreciate the contingency of our knowledge without sliding into arbitrariness. Saying "It depends" is not the equivalent of saying "It's not true" or "I don't know." It is simply to recognize the conditions of our knowledge as finite, created, social beings. Pragmatism, says Smith, helps us recover a fundamental Christian appreciation of the contingency of creaturehood.

This addition to an acclaimed series engages key thinkers in modern philosophy with a view to ministry and addresses the challenge of relativism in a creative, original way.

Contents
1. "It Depends": Creation, Contingency, and the Specter of Relativism
2. Community as Context: Wittgenstein on "Meaning as Use"
3. Who's Afraid of Contingency? Owning Up to Our Creaturehood with Rorty
4. Reasons to Believe: Making Faith Explicit after Brandom
5. The (Inferential) Nature of Doctrine: Postliberalism as Christian Pragmatism
Epilogue: How to be a Conservative Relativist
Index

"It is often observed that one of the most important and revealing questions you can ask someone identified as a 'thinker' is 'What are you afraid of?' Writing with clarity and great sympathy, Smith helps us see that Christian theologians have betrayed their best insights by being afraid of relativism. He helps us see that the challenge is not relativism itself but rather the epistemological concerns that produced relativism. As is usually the case with Smith's work, this book is both clear and constructive: he not only provides a clear account of the work of Wittgenstein, Rorty, and Brandom but also develops an account of why and how Christians should navigate the contingent character of our lives."

"In very readable and reliable expositions of Wittgenstein, Rorty, and Brandom, Smith builds an extremely attractive case philosophically for recognizing the place of contingency, finitude, and dependence in human life. From a Christian perspective, this actually reaffirms an acceptance of creaturely existence and thus of a properly orthodox version of relativism, which there is no reason to fear. A wonderful thesis."

"In Who's Afraid of Relativism? Smith takes a beautiful risk, boldly and successfully making a case for the relevance of pragmatism for contemporary Christian self-understanding. In this remarkable book, he not only succeeds in making the difficult and enigmatic work of complicated thinkers like Wittgenstein, Rorty, and Brandom accessible to the uninitiated (no small task in itself) but also argues convincingly that the pragmatist emphases on contingency and fallibility should play a key role in a Christian understanding of humans as dependent creatures. The mutual hostility between religious thinkers and pragmatists like Rorty is well known; Smith has the wisdom to see past this impasse in a timely and radical effort to encourage contemporary Christians to think differently about themselves."

"Smith is a philosophical theologian concerned about truth. In this simply structured and transparently argued book, he suggests that the work of Richard Rorty can be a source of renewal. . . . What's remarkable about Smith's book is that it takes a notorious enemy--relativism--and makes it a friend. This displays the right kind of confidence, a humble faith that's not looking to make itself impervious to threats but that listens attentively to its critics and realizes that they have the key to its own renewal. In this sense Smith admirably practices exactly what he preaches. . . . The most enjoyable parts of the exposition are Smith's absorbing narrations of films that illustrate and are made intriguing by the arguments of each philosopher. These accounts are beautifully done. . . . Reading Lindbeck's Nature of Doctrine was a threshold moment for me. It didn't cause a conversion; it gave me a structure and vocabulary for a transformation that had taken place in me over the previous two years. Smith's book is aimed at students who are more evangelical, more moviegoing, more sophomoric (Smith's word) than I was. But it could have the same effect on many. And in the process it makes a large step toward claiming Rorty as a fellow traveler for Christians open to a humble view of truth that emerges in community. It is no small achievement."

"Suggesting that relativism does not mean that 'nothing matters,' but simply that 'everything depends' on some context, Smith claims that Christianity is fundamentally about such dependence--on God and the community of faith. As always, Smith's writing is clear and compelling. This book deserves a wide readership. Whether or not one is convinced by the specifics of Smith's account, the argument is important and worth serious consideration. . . . Recommended. Lower-level undergraduates through researchers/faculty; general readers."

"I have come to appreciate the growing body of work of James K. A. Smith. All of his books have a single aim: to render accessible the Continental tradition of philosophy to a Christian audience. This book is no exception, except that it broadens the scope: analytic philosophers now come under the illuminating pen of Smith."

"This is a provocative book; that is the author's intention. It is a short book; but it is packed with content. It is a helpful book; it repays slow and careful reading. It presupposes some understanding of basic philosophical categories, but it is accessible to the novice. It is highly recommended for those who desire to understand and critique postmodern philosophy. The reminder that Christians are contingent and social creatures is beneficial. And the example of how to engage with non-Christian perspectives is a model worth emulating."

"[A] provocative volume. . . . It is excellent like so much of Jamie's work. With verve and a range of knowledge in both philosophy and theology that is at times baffling, Smith writes with equal facility to audiences in the academy and the church. . . . The title alone should draw curious readers into his argument. They'll find a familiar interaction with films as was present in Who's Afraid of Postmodernism?, making the argument and reach of Who's Afraid of Relativism? that much more relevant and timely."

"Anyone confused by the late modern world may welcome James K. A. Smith's Who's Afraid of Relativism? . . . Smith lays out some of the main issues of relativism with clarity and grace making contemporary philosophy accessible to non-philosophers without oversimplifying it. He concludes with an intriguing epilogue on 'How to be a conservative relativist,' which is a great summary of his argument. This is refreshing reading."

"[Smith] is a good guide and clear writer, even in this complicated material. . . . For each chapter, Smith offers a film, and discusses it nicely, to compliment the issues raised. . . . This is a great teaching device and does showcase some of the real-world implications of this rather obtuse stuff. . . . Much of this will be most useful for the academic and nearly every page will thrill the philosophy student, but some of it is very, very rewarding even for the general reader. . . . If it can help us not only understand the times in which we live, but understand ourselves more appropriately--as dependent and fallible Creatures--then God will be pleased, and God's people will be well served."

"I look forward to every installment in [the Church and Postmodern Culture] series, believing that each lesson will help me to address and consider current events from a different angle. Baker Academic and [series editor] James K. A. Smith are to be commended for the series. I hope they keep teaching."