An Invitation to Linger with the Gospel according to Paul 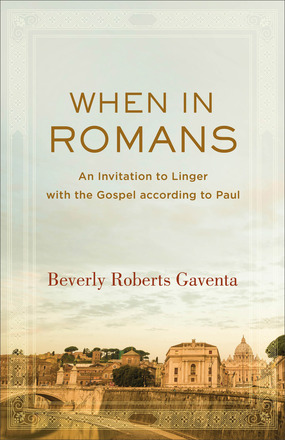 When reading the book of Romans, we often focus on the quotable passages, making brief stopovers and not staying long enough to grasp some of the big ideas it contains. Instead of raiding Paul's most famous letter for a passage here or a theme there, leading New Testament scholar Beverly Roberts Gaventa invites us to linger in Romans. She asks that we stay with the letter long enough to see how Romans reframes our tidy categories and dramatically enlarges our sense of the gospel.

Containing profound insights written in accessible prose and illuminating references to contemporary culture, this engaging book explores the cosmic dimensions of the gospel that we read about in Paul's letter. Gaventa focuses on four key issues in Romans--salvation, identity, ethics, and community--that are crucial both for the first century and for our own. As she helps us navigate the book of Romans, she shows that the gospel is far larger, wilder, and more unsettling than we generally imagine it to be.

About the Series
The Theological Explorations for the Church Catholic series is published in conjunction with Nazarene Theological Seminary in Kansas City, Missouri. Leading scholars in biblical studies and systematic theology from a variety of theological traditions offer brief, suggestive treatments of specific topics, exploring the cutting edge of their current interests and latest thinking for the benefit of the whole church.

"Using contemporary cultural illustrations from sources as varied as Terrence Malick's The Tree of Life and Bruce Springsteen's 'Land of Hope and Dreams,' Beverly Roberts Gaventa delightfully clarifies Paul's complex message in Romans. In beautifully written prose that is as compellingly clear for the novice as it is exegetically convincing for the scholar, Gaventa reminds us of the cosmic, liberative power of Paul's message. Here is that book of uncommon quality: easily accessible and utterly indispensable. Reading Romans today? Start here."

"This is a book the church has long needed. Professor Gaventa pulls back the thin veneer of familiarity to introduce us to the high drama in Paul's Letter to the Romans. Her writing is both scholarly and accessible, ancient and contemporary, theological and pastoral."

"No one makes Romans come alive quite like Beverly Gaventa. In this highly accessible but provocative book--aimed at a wide Christian audience--she challenges our domesticated construals of Paul's gospel with a vision of God's comprehensive saving agency. If the starting point and the primary subject matter of the letter is not us but God, we are suddenly liberated from our excessive anxieties about ourselves, the church, and 'ethics.' Here are 3-D lenses to see Romans, the gospel, and the reality of God's grace, power, and mystery in a new and exciting way."

"From the beginning of the Christian era until the present day, Paul's Letter to the Romans has been the source of revolutionary rethinking. Nowhere do we come closer to the radical heart of the gospel. The universal and cosmic notes of the Pauline symphony are sounded in this book by one of our most esteemed interpreters of the apostle's letters. Beverly Gaventa has written a book for ordinary parish clergy and laypeople that is fun to read and full of spicy references to popular culture, and that will jolt readers into a new appreciation for the great apostle and his unique place in the history of Christian theology."

Fleming Rutledge, author of Not Ashamed of the Gospel: Sermons on Romans and The Crucifixion: Understanding the Death of Jesus Christ

"When in Romans is deceptively accessible and lighthearted, so that readers are not immediately aware of being drawn into deep and rewarding engagement with Paul's complex text. But once inside and grappling with its intricacies, they are led securely through by Beverly Gaventa's experienced and unfailing judgment."

"Anyone who has difficulty imagining that a book on Paul's Epistle to the Romans could be a 'page-turner' should read this one. Beverly Roberts Gaventa's prose is compelling, her insights on Romans are startlingly original, and her ability to show us in Paul's letter 'the gospel in its vastness' is simply breathtaking. This book is to be savored."

"There are many books on Romans, but none quite like this one. Steeped in learning but accessible to a broad spectrum of readers, written with pastoral insight and welcome flashes of humor, here is a gift to Christians and inquirers alike. Gaventa invites us to enter the grand metropolis that is Romans, wander in its streets, relish its conversations, and be made new by its radical Lord."

"Beverly Gaventa has produced that rarest of books, combining careful, exquisite scholarship with her eye for humanizing, delightful detail. Her writing is both sophisticated and accessible as she tackles Paul's complex notions of individual and cosmic salvation. I am one of those Gaventa identifies who, more frequently than I like to admit, opted for the Gospel reading rather than grappling with Paul's sometimes tortured logic. Looking back, I would have loved turning to When in Romans."

"In this straightforward and intriguing guide to Paul's Letter to the Romans, Gaventa . . . offers insights that both illuminate the letter's original context and prove instructive to contemporary readers, beginning with a refreshing investigation into Phoebe, the deacon whom Paul entrusts to deliver the letter to the churches in Rome. Warning against 'wrenching comments out of context,' Gaventa recommends reading the entire letter, focusing not just on well-known passages, but on pervasive themes, and attending to Paul's rhetorical style by reading 'both forward and backward.'. . . In this judicious and thought-provoking exploration, Gaventa makes valuable contributions to ongoing conversations about Paul's letter."

"[This book] provides us with a glimpse of the helpful and sometimes provocative ways [Gaventa] reads Romans. While this volume is brief . . . it is by no means slight or superficial. Indeed, it is the distillation of many years of ruminating on Romans. . . . This book is written not merely with clarity, but with style and grace and not a little humor as well, and is accessible to a wide range of audiences. It is quite suitable for undergraduate and graduate classes as a point of entry into the labyrinth known as Romans. . . . There is a graciousness to Gaventa's rhetoric--she regularly and respectfully recognizes other points of view than her own and explains patiently why she disagrees with them. This book is not an exercise in polemics, but rather a passionate exposition of her current take on Romans. . . . When in Romans is a splendid book for it asks many of the right questions about Romans and teases the mind into active thought. It barbecues some sacred cows, and prods us all to rethink certain comfortable assumptions about God, salvation, church, and the world."

The Bible and Culture blog (Patheos)

"When in Romans is like a good travel book. It gives enough enticing details to draw you to journey into a new (or old) place. Yet it does not give too many details to tempt you into thinking you need not see it for yourself. Beverly Roberts Gaventa writes with her teaching experience and a passion for Paul's theology, always noting her broad reading of biblical scholarship. . . . When in Romans is a great book for an early student of Paul to begin to sense his theology in broad strokes but also was a wake-up call to me, one always preaching on the lectionary's choices of quotes from this letter. I found myself making time to sink into Romans in a way I had not since seminary: celebrating Paul as radically inclusive preacher and Phoebe's role in proclaiming the gospel. This book would also be a nice resource for a Bible study group as it has many, many notes for further reading as well as music and movie tie-ins and limited academic jargon."

"Here is a wonderful exposition of key ideas in Paul's Letter to the Romans. Gaventa . . . writes for a broad audience; her goal is to give her readers a fresh appreciation of the dynamic message of this major Pauline epistle. . . . Written with verve and depth, this book will open the beauty and force of Paul's letter to those fortunate enough to read it."

"[A] brief and illuminating book. . . . When in Romans is a lively and conversational introduction to Paul's letter to the Romans, oriented especially to those without much experience working through the text. My hope is that it will lead many to read Romans slowly and with a fresh perspective, straying from the most commonly read passages to spend more time with the letter as a whole. For those already familiar with Paul's writings and possessing an abiding interest in Pauline scholarship, this book also gives a good sketch of what comes to the forefront when Paul's letter to the Romans is approached with an apocalyptic lens."