War and the American Difference 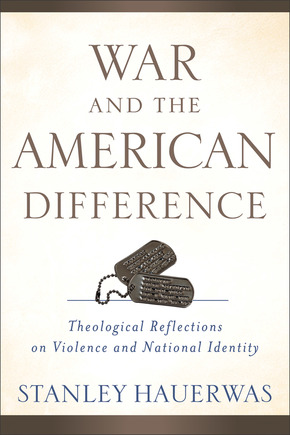 "Disenthralling Americans from war will require an authentic realism that displaces the illusions commonly passing for realism. Hauerwas continues the vital work of planting the signposts that show us the way."--Andrew J. Bacevich, Boston University; author of Washington Rules: America's Path to Permanent War

How are American identity and America's presence in the world shaped by war, and what does God have to do with it? In this compelling volume, Stanley Hauerwas helps readers reflect theologically on war, church, justice, and nonviolence, exploring such issues as how America depends on war for its identity, how war affects the soul of a nation, the sacrifices that war entails, and why war is considered "necessary," especially in America. He also examines the views of nonviolence held by Martin Luther King Jr. and C. S. Lewis, how Jesus constitutes the justice of God, and the relationship between congregational ministry and Christian formation in America. Students and teachers of Christian theology and ethics, American church history, and American cultural studies will value this work.

Contents
Introduction
Part 1: America and War
1. War and the American Difference
2. America's God
3. Why War Is a Moral Necessity for America
Part 2: The Liturgy of War
4. Reflections on the "Appeal to Abolish War"
5. Sacrificing the Sacrifices of War
6. C. S. Lewis and Violence
7. Martin Luther King Jr. and Christian Nonviolence
Part 3: The Ecclesial Difference
8. Jesus, the Justice of God
9. Pentecost: Learning the Languages of Peace
10. A Worldly Church: Politics, Theology, and the Common Good
11. A Particular Place: The Future of Parish Ministry
12. Beyond the Boundaries: The Church Is Mission
Index

"Disenthralling Americans from war will require an authentic realism that displaces the illusions commonly passing for realism. In this luminous volume, Stanley Hauerwas continues the vital work of planting the signposts that show us the way."

"Beginning from the startling claim that war defines American political identity, these essays should interest both religious and secular readers. Hauerwas defends a Christian pacifism that allows no compromises with war, including that most common form of compromise--just war theory. Christians will be powerfully challenged by his claim that nonviolence is a necessary condition of a church that is a living witness to Christ. Secular readers will be forced to rethink the ground of their own commitment to a politics built on violent sacrifice. Hauerwas demands of all of us that we think through the character of our faith and the sources of ultimate meaning in our lives."

"The reason to read yet another book by Hauerwas is his reason for writing it: to 'help us, Christian and non-Christian alike, to confront the reality of war.' He confronts us with compelling evidence that 'war is America's central liturgical act' by which it renews its sense of being a unique nation. Our sacrifices and the sacrificed, beginning with the Civil War, compel us to engage in war as a noble calling to redeem the world. Absent a church disciplined by divine justice (that is, by Jesus) and articulate about human suffering (a Pentecostal gift), war will remain the most compelling option we have."

"[A] coherent argument grounded in the eschatological understanding that Christians are to live in the world as those who know that war has been overcome by the cross and resurrection of Christ. . . . This book gives readers significant (not idealistic) tools for imagining a world without war and for challenging the prevailing ethos of perpetual war that marks American identity and practices. I highly recommend that readers once again enter into conversation with Stanley Hauerwas regarding what it means to be the peaceable people of God in a world at war."

"While much of the argument will be familiar to even the most casual Hauerwas reader, this book also contains fresh insights and new approaches that warrant the attention of both his admirers and critics. War and the American Difference delves deeper than any of his previous works into the complex historical relationships among American Christianity, political culture, and messianic conceptions of war. Hauerwas has always claimed that war is a moral practice we find nearly impossible to resist. But here, he provides a social and historical analysis of its enticements. In the end, he argues cogently that American Protestantism provided the rhetorical resources for Americans to experience war as a liturgy of self-sacrifice that binds Americans together despite their diversity. The book also breaks some new ground by confronting the Just War argument that pacifism is insufficiently realistic."

"Some who hold nonpacifist convictions may be tempted to dismiss [this book] . . . but to do so would be a mistake. Indeed, offering much more than merely an apologetic for pacifism, [this book] place[s] nonviolence in the context of rich theological reflections that will benefit the careful reader of any persuasion on the question of violence. . . . [An] important [work] that need[s] to be read seriously both by theologians and philosophers as well as anyone seeking a Christian alternative to violence and war."

"Although [Hauerwas] . . . has written extensively over the years on issues of peace and violence, this collection is significant as his first work focused primarily on these issues and their public significance in the United States, and particularly in the context of our post-9/11 world."

"Stanley Hauerwas always makes for an interesting read, and this work proves no exception. . . . This work on Christian pacifism sets itself apart by the way it connects the moral issues surrounding war with the unique challenge faced by American Christians. . . . While Hauerwas certainly leans on his decades-long effort to move pacifism to the forefront of Christian theological discussions, his work here approaches the topic from enough creative angles to ensure an engaging read, even for the most seasoned reader of Hauerwas. Besides tackling the ethical challenges unique to the American experience, he also engages the thought and practice of some of the most profound twentieth-century thinkers on these topics. . . . Christians from all traditions will find themselves challenged by his interpretation of the gospel."

"[Hauerwas's] argument seems very well-researched and expressed and even profound (which is not to say I agree with every aspect of it). . . . Of course, Hauerwas is a pacifist, but one does not have to be a pacifist to see some cogency in his analysis of American wars."

"In this collection of impolite, uncompromising essays, Stanley Hauerwas sketches a theologically rich portrait of Christianity that takes absolutely seriously Jesus's command to love our enemies. . . . [It is] effective at unmasking the bloody gods of war."

"[A] challenging, theologically-thick exploration of war in a country of exceptionalism that effectively turns Christianity on its head as it justifies war as inevitable, and even necessary. . . . [Hauerwas's] goal is to refine rather than defend his own position as he calls the church to a radical role of new mission in the world, always local, always particular, always personal, and therefore finally catholic. . . . [This book] belong[s] on the syllabus of any peace and justice curriculum designed to help students today to understand the role of church and school, and to experience through the views of realists committed to dialogue and reflection, not polemicists committed to cant."