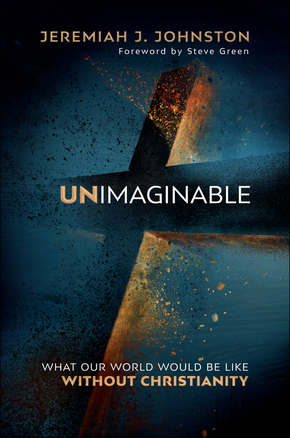 That's what some people think and want. They say Christian beliefs and our way of life aren't relevant anymore. But what critics and even many churchgoers don't realize is the life-changing importance of Christianity.

Showing how the world would be a dark place without Christianity, Unimaginable guides you through the halls of history to see how Jesus' teachings dramatically changed our world and continue to be the most powerful force for good today. Learn . . .

· How Christianity has stood against the evils of slavery (more than once), racism, eugenics, and injustices toward women and children

· Why democracy, freedom as a universal value, and modern education and legal systems owe much to Christianity

· How Christians throughout the ages have demonstrated the value of human life by sacrificially caring for the sick, handicapped, marginalized, and dying

· How people of faith are extending God's kingdom through charities, social justice efforts, mental health initiatives, and other profound ways

This provocative and enlightening book is for anyone concerned about where our world is heading.

"Sweeping in scope and teeming with insights, this creative and compelling book shows us the horror of a world without Christianity. An eye-opening work that should be read with pen in hand to mark points to remember. Truly powerful and persuasive."

"This brilliant book is a wake-up call to a world that refuses to see the impact of the life, death, and resurrection of Jesus Christ and to a church that has too often forgotten who we are and what we believe."

"In today's politically correct environment, Christianity is the militant secularists' default scapegoat, blamed for every societal problem. A sober review of history into the modern era exposes this calculated effort to demonize Christianity. Unimaginable documents Christianity's overwhelmingly positive influence on the world and, contrastingly, describes the horror anti-Christian forces have inflicted on mankind. Refreshingly, Johnston corrects the record."

"A sophisticated, thoughtful book based on a profound assumption--and it entertains as well as instructs."

"Brilliantly conceived and beautifully written, Unimaginable is a splendid book for both Christians and non-Christians. . . . I heartily commend Johnston for this outstanding work."

"For half a century, America has been moving away from its Christian heritage. Many apparently are oblivious to the value of this heritage and how it laid the very foundation on which this great nation was built. I am pleased to recommend this compelling and fascinating book."

"This book joins What If Jesus Had Never Been Born? and Who Is This Man? as historical affirmations of the positive effects of the Christian faith. Easy to read and thoroughly documented, Unimaginable shows how the fundamental values humans hold dear are traceable to Christianity. Where we find a rejection of those values we find death, destruction, and despair. Far from being a detriment to the world or the source of all ills, Christianity is foundational to our concepts of freedom, equality, and human dignity."

"Much of the way we interpret reality is determined by how we view the world, and the Christian worldview has shaped millions of lives across the globe. If you want to make the case for what you believe as a Christian, or simply want to investigate the truth for yourself, this book will help you in a new and meaningful way."

"Unimaginable is brimming with hope as the author proves not only the relevance of Christ to culture but also the heart-healing, spirit-restoring power available through the Savior. Bravo!"

"A timely, well-researched, and fascinating book . . . the definitive response to the claim that Christianity is 'poisonous' for the world."

"Wow! This book is a FastPass to the epic ride known as the Christian faith . . . a must-read for anyone who wants to 'give an answer for the hope that lies within us' (1 Peter 3:15). The author's scholarly detail encourages parents, students, teachers, and pastors to dig deep."

"Western culture is under assault, and it may not survive. That's why Unimaginable is so critical to this moment in history. I encourage you to share it with someone who thinks the Christian faith is outdated and irrelevant, because what comes after Christianity may be the end of us all."

Phil Cooke, PhD, filmmaker and author of Unique: Telling Your Story in the Age of Brands and Social Media

"What a difference the gospel makes! The book presents not only a powerful apologetic for a culture that takes for granted the legacy of the Christian faith but also a clear vision of the transforming power the gospel can bring to any society."

"Unimaginable contains insights into human history and culture that to my knowledge have not been perceived before. Some of it is simply terrifying. Today's atheists and nihilists do not know they are playing with fire, a fire that could destroy our civilization. What ended slavery? What ended systemic abuse of children and women? What ended gross ignorance and superstition? Read this book and you will find the answers."

"With scholarly research and imaginative flair, Jeremiah Johnston asks us to consider the unimaginable: What if Christianity had not won the war of competing ideologies? What if it were not to continue as a world-changing influence? This insightful book will help you to understand why Christianity makes sense for us and the world we live in."

"As we live in a world desirous of scourging religion from life, Dr. Johnston shows that without difference-making believers in Jesus, many of the greatest elements of our world would be missing. Atheist, agnostic, or lifelong churchgoer--read this book and realize the importance and power of Christianity."

"A remarkably clear account of the often underestimated impact of Christianity on a culture and on individuals. As an educator, I welcome this engaging text as a primer for anyone interested in the historical, social, and personal effect of the powerful message of Christianity."

"Unimaginable is one of those rare books that successfully combines cutting-edge scholarship on the origins of Christianity with meaningful and thought-provoking reflections on the place of religion in the contemporary world. In a bold way, Johnston presents the strong and unflinching case that in terms of ethics, social values, and human equality the world is a better place because of the contributions of Christianity."

"Someone once asked: What if you woke up tomorrow with only the things you thanked God for today? We tend to take advantage of the stabilizing factors in our lives and communities. If Christianity never existed, what would people miss out on, long for, or worry about? Unimaginable will not only compel you to thank God for his influence but also inspire you to reflect Christ's heart to a world very much in need of a Savior."

"It is essential that we understand the influence of Christ and the Christian faith upon civilization and culture. Our witness in the world is at stake, and one of the most significant reasons we believe and share our message is the massive impact of Christianity upon the lives of millions. . . . I highly recommend this book."

"Jeremiah Johnston takes you on a sweeping ride through history to reveal how Jesus Christ has infused our lives with goodness in ways you may never have imagined. I can't recommend this book highly enough!"

Frank Turek, Crossexamined.org and co-author of I Don't Have Enough Faith to Be an Atheist

"Always the scholar who keeps his finger on the pulse of real-world society and culture, Jeremiah Johnston has produced a volume that addresses the myriad of blessings Christianity provides. It immediately reminded me of the 'New Atheist' complaints in recent years that religion never produces good results. Read this book and you'll have more answers than you'll ever need!"

"Jeremiah Johnston brilliantly shows us what a world without Christianity has been and would be. I was struck in new ways by just how miserable the lives of most of Christianity's most famous opponents have been. Don't be a miserable opponent of Christianity. Read this book."

"Counterfactual studies are always fascinating, but Unimaginable is especially so. Contemplating a world without Christianity reminds us anew of all the gospel of the Lord Jesus Christ has accomplished and all that his church has done for the world's good."

"Johnston's readers have reason to be pleased with his new work that highlights the cultural impact of the Christian faith. Of particular relevance are the sections on eugenics, slavery, and racism, and the historic Christian rejection of these evils. May we take his words to heart in our day."

"Jeremiah Johnston is one of the brightest young Christian apologists today. Unimaginable will prove to be an invaluable resource for believers who desire to be more effective defenders of the faith. I highly recommend this book."

"For the past few decades, Western society has been on a path to purge itself of Christian influence. If the trend continues, will progressives want what they get? Engaging and informative, this timely volume considers what our world and even modern Western society might look like without the tremendously positive impact of Christianity. I love the concept! Christian and non-Christian readers alike will walk away with a conviction similar to that of militant atheist Richard Dawkins: Christianity may very well be the barrier preventing the world from becoming a place where freedom and justice are things of the past."

"More than one hundred of the foremost atheists, agnostics, secularists, and philosophers have filmed interviews with me. Collectively, their accusation is that Christians do not know how to think critically. Jeremiah Johnston not only refutes the error, but presents the positive, seismic, irrefutable changes Christianity has brought to our world. Every Christian needs to know the crucial truths in this book."

"Many say Christianity is outdated and bigoted, based on a book of ancient myths. Jeremiah Johnston beautifully and biblically outlines that from politics to education to the hope of eternal life through Jesus Christ, Christianity is actually the world's greatest force for good."

"Unimaginable is essential reading. My trusted friend Jeremiah gives us a clear and compelling defense for the positive impact of Christianity on history and society. It is a book that will empower believers and answer skeptics. Read it and share it immediately."

Philip Nation, author of Habits for Our Holiness