The Early Christian Worldview of the Letter to the Romans 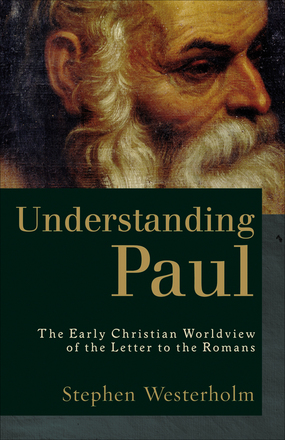 "Accessible yet challenging, written with clarity and lightness of touch, uncluttered with citations of secondary literature yet brimming with biblical references, this book aims to show you how Paul thought about life, while bidding you to think about your own--and it succeeds brilliantly in that aim. . . . Highly recommended."--R. Barry Matlock, Journal for the Study of the New Testament Booklist

In his study of Paul, Stephen Westerholm suggests that despite the unparalleled influence the apostle has exercised over the last two thousand years, he is little understood by contemporary readers because they often read the Pauline Epistles from the largely unconsidered presuppositions of modern culture. To counter that perspective, Westerholm proposes investigating the mindset of Paul himself.

Westerholm's well-crafted book presents an insightful survey of the apostle's thought world. It focuses on the Epistle to the Romans as the most thorough and detailed account of Paul's convictions regarding Christian life and doctrine. Westerholm uses the letter as a guide to the themes that were most important for the apostle, revealing the fundamental elements of Paul's thought and the Jewish tradition from which it emerged. Following the thematic approach of the epistle, he considers each subject in the order it was taken up by Paul. Along the way, he delves into the writings of the Old Testament and their influence on Paul, presenting the issues in a manner that will challenge contemporary readers to rethink their ideas about faith, belief, and the life well lived.

"If C. S. Lewis had been a biblical scholar, he would have written a book like this one. Westerholm combines scholarly precision, delightful prose, and a sympathetic reading of Paul to produce a book that is difficult for anyone--whether scholar, student, or curious inquirer--to put down."--Frank Thielman, Beeson Divinity School

"This is a sparkling introduction to Paul's thought, written with uncommon verve. Westerholm uncovers the gap between Paul's presuppositions and those of the modern West but provokes us into taking Paul seriously and widening our limited horizons. Students will find this an engaging guide to Paul in general and Romans in particular; scholars will be challenged to match Westerholm's brilliance as a communicator."--John M. G. Barclay, University of Durham

"It is difficult to imagine anyone who would not profit from this engaging and well-written introduction to Paul's thought and world. Since Romans forms the basis of the engagement, Paul's essential themes emerge. Westerholm has succeeded well in his task of showing moderns what makes Paul tick. This would be a great textbook in a course on the entire New Testament or on the epistles in which only one small volume had to serve to introduce Paul's thought."--Bill Klein, Ashland Theological Journal

"The goal is to make comprehensible the major components of Paul's vision of life as they are raised in his most important letter. Its purpose is realized in an admirable way."--Charles H. Talbert, Review and Expositor

"An excellent introduction, for the contemporary unbeliever, of many of the most important of Paul's theological teachings. And Christians can also profit from the book's fresh portrayal of well-known theological themes. There is something refreshing about a book on Romans without a single reference to another scholar!"--Douglas Moo, Themelios

"It is challenging, provocative, biblically informed, lucid and well-written. . . . I join with others in proclaiming that the book deserves a wide audience and sets a high standard for religious dialogue."--Richard N. Longenecker, Studies in Religion

"Westerholm offers to a general audience a well written, though limited, introduction to the thought of St. Paul and sets out to retrieve the worldview worked out by Paul, a perspective not often understood by the contemporary reader. . . . The book could be effectively used in a course on New Testament or Pauline Ethics."--Jay M. Harrington, OP, Catholic Library World

"Accessible yet challenging, written with clarity and lightness of touch, uncluttered with citations of secondary literature yet brimming with biblical references, this book aims to show you how Paul thought about life, while bidding you to think about your own--and it succeeds brilliantly in that aim. . . . Highly recommended."--R. Barry Matlock, Journal for the Study of the New Testament Booklist

"Westerholm writes with his customary humor and parabolic style. . . . His book is fantastic for someone with a college course in philosophy but with little to no understanding of the Bible or Christianity. It's also of great use for Christians of whatever stage, particularly in helping them to articulate their faith today."--Gary S. Shogren, Ashland Theological Journal