A Christian Response to Popular Beliefs and Practices 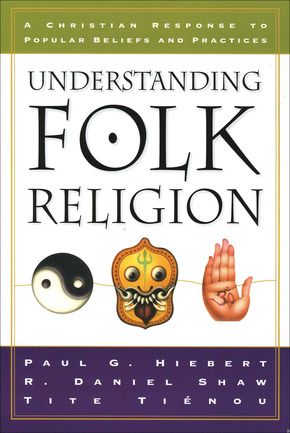 "A handy reference for Christian workers who are puzzled by the variety and ubiquity of folk religion and are lost in the maze of the multiplicity of Christian responses to folk religion."--Enoch Wan, International Bulletin of Missionary Research

Around the world Christian churches face the challenge of folk religions. Missionaries brought formal Christianity and assumed that traditional religions would die out as the gospel displaced animistic beliefs and practices. Today it is clear that old ways do not die out, but instead remain largely hidden from view. People affirm orthodox theologies, but go to witch doctors, shamans, diviners, and healers during the week. Christianity has become an overlay, coexisting with folk beliefs in an uneasy tension. How is the Christian church to respond?

The authors, drawing on their years of experience, both in the classroom and on the mission field, offer a compelling model that accounts for the continued persistence of folk religions. Arguing that Western missionaries have failed to take these traditions seriously, they present a richly detailed portrait of the belief systems and practices that characterize folk religions (illustrated throughout with numerous charts and examples drawn from particular cultures).

Effective evangelization requires that the message of the gospel be made relevant and understandable to a particular society. Difficulties arise when missionaries attempt either to suppress the practice of folk religions or to assimilate native rites and rituals uncritically. In neither case, do they adequately consider the importance that such beliefs and practices play in the daily lives of people.

Folk religions explain "the existential problems of everyday life" for their respective cultures. They are a social attempt to account for the problems of material existence and to exercise a degree of control over it. In particular, the authors consider four life concerns that inform the belief systems of folk religions: the threat of death, tragedies and life's misfortunes, guidance and the unknown, and the problem of right, wrong, and moral order. In each case, they consider the importance of such issues and elements that might be involved in a truly Christian response. In the final section, they offer a detailed proposal for theological and missiological responses to folk religions.

In every culture, the authors argue, successful evangelism must present a biblical response that takes account of such belief systems and the respective practices that express those beliefs. This volume provides modern missionaries with sound principles for developing a serious Christian response to prevailing folk religions.

"This is a book for all Christians to read who are serious about deep-level spiritual transformation. Our cultural upbringing often hides from our awareness areas of life that need to be confronted by the gospel. Reading this book will help uncover aspects of our own worldview and practice that are more informed by North American culture than by the kingdom values of the Lord Jesus Christ. There are few resources available, apart from living in a cross-cultural context, that can do what this book can accomplish. Can a person worship Christ on Sunday and visit a witch doctor on Monday
morning for a healing remedy? This is the question Hiebert and his colleagues deal with in an effort to uncover what people really believe in a variety of cultures. They demonstrate how Christian missionaries have often forced folk beliefs underground when they actually thought they had rooted them out. They do a masterful job of providing the framework of a biblical response to a number of issues ranging from ancestor veneration to shaman soul flight."
--Clinton Arnold

"Here is a book that really does what the title suggests: It effectively helps Christians understand and respond to the beliefs and practices of folk religion, at home and abroad."
--Gerald H. Anderson, director, Overseas Ministries Study Center

"Hiebert et al. have produced an excellent resource book to serve as a text in missiology classes addressing folk religions and critical contextualization. The book provides a substantive overview of the characteristics of folk religions and excellent guidelines for a thoroughly biblical response to these religions in Christian mission. A significant strength of the volume are the chapters which focus on the central questions of life addressed in folk religions, and the biblical principles essential for a Christian response. The exceptional chapter on sacred myths shows how Indo-European myths have influenced missionary bias and popular theologies of spiritual warfare. The book concludes by identifying the key theological issues of relevance for new and maturing churches in folk communities. For missionaries and Christian workers in folk societies around the world, this book provides sound theoretical understanding, comprehensive elucidation of the characteristics of folk religions, and fundamental biblical and theological principles for practical application in ministry."
--Sherwood Lingenfelter, Dean, School of World Missions, Fuller Theological Seminary

"As a missionary in Central America, I saw professing Christians sacrifice chickens on their way to church. As a missions professor in North America, I see professing Christians consult horoscopes for daily guidance. This much needed and long overdue volume provides the perspective needed to understand the what and why of the everyday religious beliefs and practices--both old and new--that actually shape the lives of their adherents. Contains culturally sensitive, theologically sound, and missiologically astute guidelines for communicating biblical truth in a transforming way."
--Kenneth B. Mulholland, Dean, Columbia Bible Institute & Graduate School of Missions

"This is an exciting book that is certain to become a standard text for mission courses at evangelical Bible colleges and seminaries."--Irving Hexham, Journal of Evangelical Theological Society

"This book is a handy reference for Christian workers who are puzzled by the variety and ubiquity of folk religion and are lost in the maze of the multiplicity of Christian responses to folk religion. It will be appreciated by missionaries and Christian leaders who have felt inadequate to deal with perplexing issues related to folk religion. The many figures and diagrammatic presentations are most helpful, evident of being classroom tested by the authors, who are seasoned seminary professors in missions."--Enoch Wan, International Bulletin of Missionary Research

"The publication of this book in 1999 represents something of a landmark in the study of religious groups called folk, tribal, or indigenous. The authors eschew the usual ways of studying indigenous religious groups and instead opt for a cross-cultural, phenomenological, and functional analysis. The result is a book that enables a theoretical study of folk religion as a category rather than as individual studies of folk religions."--Terry C. Muck, Missiology

"A fascinating book with a wealth of information on cultures and folk religious
practices. . . . This book is not only for missionaries, but also for all Christians engaged in cross-cultural ministries in their own societies. It provides sensitive, sensible, and theologically sound guidelines."--Johan D. Tanelder, Reformed Perspective