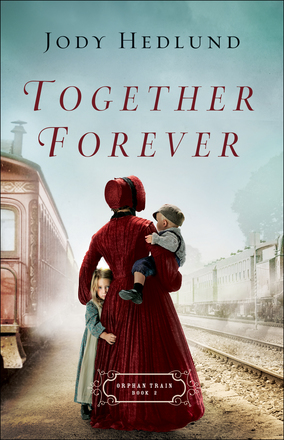 Will the Mistakes of Their Past Cost Them a Chance at Love?

Determined to find her lost younger sister, Marianne Neumann takes a job as a placing agent with the Children's Aid Society in 1858 New York. She not only hopes to offer children a better life, but prays she'll be able to discover whether Sophie ended up leaving the city on an orphan train so they can finally be reunited.

Andrew Brady, her fellow agent on her first placing-out trip, is a former schoolteacher who has an easy way with the children, firm but tender and friendly. Underneath his charm and handsome looks, though, seems to linger a grief that won't go away--and a secret from his past that he keeps hidden.

As the two team up, placing orphans in the small railroad towns of Illinois, they find themselves growing ever closer . . . until a shocking tragedy threatens to upend all their work and change one of their lives forever.

"The first book in her Orphan Train series is a heart-stirring story of survival and love filled with memorable characters."--Booklist (starred review)

"A powerful and historically grounded story about finding your own strength and worth through faith."--Christian Market

"Marianne and Drew's friendship and romance bring a delectable sizzle and emotional intimacy to this historically informative, beautifully layered, and spiritually inspirational tale about loving someone enough to let them go."

"This second book in the Orphan Train series is a poignant and historical anecdote about courage and forgiveness. It is a great read for fans of Julie Lessman and Tracie Peterson."