The World around the Old Testament

The People and Places of the Ancient Near East 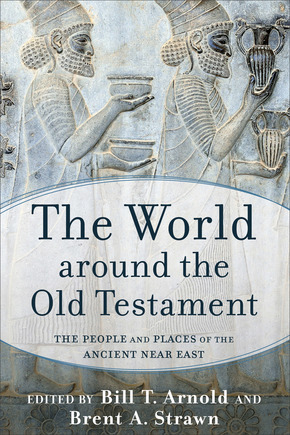 Leading Experts Introduce the People and Contexts of the Old Testament

What people groups interacted with ancient Israel? Who were the Hurrians and why do they matter? What do we know about the Philistines, the Egyptians, the Amorites, the Assyrians, the Babylonians, and others?

In this up-to-date volume, leading experts introduce the peoples and places of the world around the Old Testament, providing students with a fresh exploration of the ancient Near East. The contributors offer comprehensive orientations to the main cultures and people groups that surrounded ancient Israel in the wider ancient Near East, including not only Mesopotamia and the northern Levant but also Egypt, Arabia, and Greece. They also explore the contributions of each people group or culture to our understanding of the Hebrew Scriptures.

This supplementary text is organized by geographic region, making it especially suitable for the classroom and useful in a variety of Old Testament courses. Approximately eighty-five illustrative items are included throughout the book.

"The best scholars in the modern world illuminate the various peoples in the ancient world of the Bible in this indispensable resource for students and teachers."

"For those interested in gaining a deeper understanding of the Scriptures, The World around the Old Testament is an eminently useful and accessible resource. The volume features detailed, well-written, and informative articles on various peoples and places mentioned in the Bible, written by leading authorities in the field. The careful attention devoted to recent archaeological excavations and ancient inscriptions is most welcome."

"The World around the Old Testament is a refreshing contribution to contextualizing the Hebrew Bible within its ancient Near Eastern and Mediterranean context. The specialists for each area focus on their particular region while tying it into the larger framework of the Hebrew Bible."

"This is an especially important book. Nowhere else can one find, in a single volume, the kind of up-to-date and nuanced treatment of the ethnolinguistic groups of the ancient Near East that appears in this collection. Each chapter is written by a renowned scholar, and each carefully explains the sources that are used to reconstruct our understanding of the history, language, and religion of these cultures. The clear-eyed examination of current scholarly debates and the identification of key insights for the study of biblical texts also set this book apart. While the authors play to their strengths--with some emphasizing the surviving literature of a given group and others concentrating on political history--all of the discussions are extensive, robust, and far-reaching in their use of contemporary scholarship. The World around the Old Testament will be a very productive resource for advanced students and scholars alike."

"Arnold and Strawn have done a tremendous service for students and scholars alike by assembling a stellar cast of contributors for the purpose of producing a fresh survey of the main ethnic and political groups that interacted with Israel throughout the timespan covered in the OT. . . . For the reader familiar with the general world of biblical studies, the first immediate impression will be the exceedingly high quality of the scholars participating in this project. In nearly every case, the authors of the individual chapters are well-recognized experts with substantial publishing records on the specific people groups in question. . . . The World around the Old Testament will be valued by both students and professors for years to come, as each of the individual chapters constitutes an ideal starting point for any kind of research involving the civilizations covered."

"A single volume reference offering detailed historical, cultural, and religious treatments of the major empires as well as regional and local polities that significantly touched upon, impacted, or otherwise influenced biblical Israel. . . . Such a work is an invaluable supplementary text for students of the Hebrew Bible."

"The essays . . . are well worth reading because they are excellent state-of-the-art syntheses of the people groups surrounding ancient Israel."

Journal of the American Oriental Society

"This volume should become a standard resource for anyone who studies the Old Testament. While the book does not blindly align to every Old Testament event, it succinctly and engagingly addresses the extrabiblical geopolitical situations that are pertinent to the Scriptures. . . . Over and over again, the individual chapters bring to light new and refreshing insights into the biblical text. . . . If you desire to understand how ancient Near Eastern societies outside Israel shaped the background of the Old Testament, this book is for you. Moreover, if you wish to understand the cultures and lifestyles of the nations around Israel, this book is also for you. Already, it has become a mainstay in my library, and I will refer to it frequently in the future."

"This resource provides advanced students and scholars access to world-renowned experts by way of a single introductory volume centered on the contextualization of the OT in its ANE milieu. . . . I highly recommend this book for its outstanding collection of essays, and for its up-to-date scholarship regarding various and important data relevant to the 'world around the Old Testament.'"

"Each contributor thoroughly explores evidence from biblical texts, ancient Near Eastern texts, and archaeological investigation in presenting the historical origin and development of the nations around Israel. The information is rendered in such a way that the reader is clearly informed about the political context of the civilizations mentioned in the Old Testament. . . . Examinations of significant cultural conditions for each civilization are also laid out in a very informative way. . . . Presentations on how each nation was involved in the story of Israel are notable. . . . Biblical students and those who are interested in the development of ancient Near Eastern civilization during the time of the Old Testament will gain a great amount of understanding through the extensive observation offered in the book."

"This volume of essays by well-established scholars on the ancient Near East features essays that give the reader ample historical, geographical, and cultural background on the peoples that populate the OT, such as the Amorites and the Greeks. These essays are not written for casual students of the Bible, but readers who are inclined to delve deeply into the ancient Near Eastern background of the OT will find this resource a real treasure."

"Bill Arnold and Brent Strawn have put together a collection of essays written by today's leading scholars in the field of ancient Near East studies to offer detailed information about the various people groups in the ancient eastern Mediterranean world. . . . [Readers] will find a vast array of up-to-date information about the history, language, culture, and religion of these people groups. . . . For advanced students, this is a very useful work not only because of the essays it contains but also because of the bibliographies included for further reading at the end of each chapter. . . . Arnold and Strawn build on similar but outdated books with new and up-to-date information in a very reader-friendly way. Pictures and maps are included as visual aids, and three different indexes are included to help readers navigate the text."