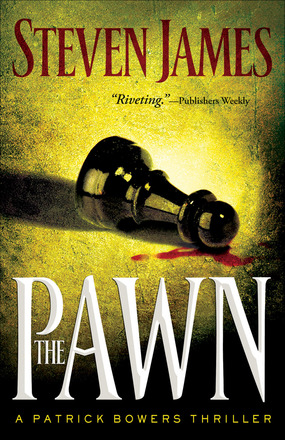 Called to North Carolina to consult on the case of an area serial killer, Bowers finds himself caught in a deadly game of cat and mouse. Cunning and lethal, the killer is always one step ahead of the law, and he's about to strike again. It will take all of Bowers's instincts and training to stop the man who calls himself the Illusionist.

Thrilling, chilling, and impossible to put down, The Pawn will hold you in its iron grip until the very last page.

"Steven James combines 21st-century high-tech law enforcement techniques with 18th-century Sherlockian deduction to craft an exciting, suspense-filled story. Dr. Patrick Bowers uses geography and his wits in the pursuit of a calculating, ruthless predator. The Pawn covers a wide range of human experience as its characters fight both internal and external battles for their survival."--Dr. Kim Rossmo, Center for Geospatial Intelligence and Investigation, Texas State University

"In his brilliant debut novel, Steven James gives us a captivating look at the fine line between good and evil in the human heart. The Pawn is not to be missed."--Ann Tatlock, author of Every Secret Thing

"I consider The Pawn the best-written thriller I've read from a Christian publisher.--Cecil Murphey, coauthor of 90 Minutes in Heaven and more than 100 other books

"Riveting...a gripping plot and brisk pacing will win James some fans eager for his next offering."--Publishers Weekly

"[With] fast-paced crisp writing and [an] engaging protagonist . . . this [is] a satisfying read."--CBA Retailers

"[An] exceptional psychological thriller. Steven James writes at a break-neck pace, effortlessly pulling the reader along on this incredible thrill ride. With the backdrop of the Jonestown disaster, James has added a clever dose of history that brings a sense of relevancy to the story. The plot twists and turns while never hinting at the destination, and the characters are rich and absorbing. In the end, James leaves us enough to satisfy and whets our appetite for more. With this first installment of The Bowers Files, Steven James has left his mark as a writer to watch for."--Armchair Reviews

"A very interesting story. This is the first of a planned series, the second of which is The Rook. If it is as tightly drawn and paced as The Pawn already is, John Sandford might have to start looking over his shoulder."--Crimespree Magazine

"The Pawn is an intense, CSI-like thriller. Not a story for the weak of stomach or faint of heart, the killers' histories and crime scene descriptions spare no detail. With his first novel, James steps into Christian fiction with a bang."--Christian Retailing