The Patient Ferment of the Early Church

The Improbable Rise of Christianity in the Roman Empire 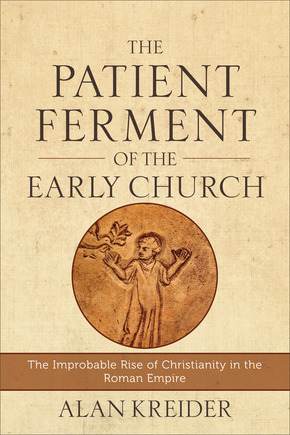 During the three centuries before the conversion of the emperor Constantine, the Christian church grew in the Roman Empire. It grew despite disincentives, harassment, and occasional persecution. What enabled Christianity to be so successful that, by the fifth century, it was the established religion of the empire?

In this unique historical study, Alan Kreider delivers the fruit of a lifetime of study as he tells the amazing story of the spread of Christianity over its first four hundred years. Challenging traditional understandings, Kreider contends the early church grew because patience was of central importance in the life and witness of the early Christians. Patience was the virtue about which the patristic writers wrote most--Tertullian, Cyprian, and Augustine all wrote treatises on it. Patience entailed trusting God, who was inexorably at work; obeying Jesus, who embodied patience and called his followers to live in unusual, patient ways; and responding to people who were attracted to their life and message in such a way that they would be formed to become patient believers. Instead of writing about evangelistic method, the early Christians reflected on prayer, catechesis, and worship, all of which formed believers to have patient reflexes and to participate in a church that grew not by plan but by ferment. This book will benefit professors, students, and scholars of ancient Christianity, mission, liturgy, and Christian formation as well as pastors and church leaders.

Introduction
Part 1: Growth and Patience
1. The Improbable Growth of the Church
2. The Good of Patience
3. Push and Pull
Part 2: Ferment
4. Christians as Agents of Growth
5. Communities as Cultures of Patience
Part 3: Forming the Habitus
6. Catechesis and Baptism
7. Worship
8. "Wise Doves" in the Didascalia apostolorum
Part 4: The Transformation of Patience
9. The Impatience of Constantine
10. Augustine and the Just Impatience
Index

"Alan Kreider has done it again. Here he utilizes his immense grasp of early Christian sources, texts, and scholarship to illuminate for us the virtue of Christian patience and its formative nature in articulating an approach to worship and life. Highly recommended."

"At a time when many scholars interpret the rise of Christianity in terms of power, Kreider provides a refreshing and warranted scenario of early Christian growth from the 'inside.' Although this approach is admittedly harder to document, the reader is invited to discover the slower and more subtle processes that have been neglected in arguments for the rapid rise of Christianity. Herein one will find a means to better balance the scholarly dialogues prevalent today."

"'Time is greater than space.' Pope Francis has been urging this principle on both the church and movements for peaceful social change. As he wrote in The Joy of the Gospel, 'This principle enables us to work slowly but surely, without being obsessed with immediate results' or 'trying to possess all the spaces of power and of self-assertion.' Alan Kreider's thoroughly researched yet marvelously readable new book demonstrates that Francis is actually calling Christians back to the nonviolent patience and winsome witness of the church's first centuries. Catholic theologians and church historians who are attending deeply to Pope Francis will find much in Kreider's book to guide them in the ressourcement we should be doing in order to bring to life the pope's call to us."

"In this lively and insightful study, Alan Kreider draws on deep learning to offer a picture of the early Christian communities at a time when their future was anything but certain. Ancient men and women come to light in this study as people whose improbable success in winning converts was the direct result of their own struggle to live with--and live up to--the powerful ideals of patience and humility. Kreider has the rare ability to read ancient sources from a fresh perspective and to see the growing pains of ancient churches in a way that benefits from--and illuminates--modern pastoral insight. The Patient Ferment of the Early Church is a marvelous and inspiring book."

"In this remarkable book, Alan Kreider refocuses our attention on patience, the cardinal virtue of the early church's witness, with rich attention to how this was cultivated in worship and catechesis. The allure and beauty of a patient people is something a triumphalist church forgot. I can't imagine a more timely history for the church in our secular age."

James K. A. Smith, Calvin College; author of Desiring the Kingdom and You Are What You Love: The Spiritual Power of Habit

"[Kreider] has mined the sources of the first centuries of the church to inform our current practice. . . . The importance of his argument is found in the shifts from patience to expediency that came as the church rose to power. . . . Kreider's argument is insightful. He impressively pieces together historical sources and current research, and capably applies modern theories to explicate what was happening so long ago. But this is far from just a historical discussion. It is clear throughout the book that Kreider has one foot in the past and one in the present."

"The author shows clearly and masterfully how the early sources illustrate the values that he lays out for the success of the church. . . . His precisely researched and well-evidenced use of ancient writings accompanies a perceptive articulation of patient ferment to support Kreider's theory. His emphasis on 'ordinary Christians' as a powerful force in the Roman Empire shows insight into an era frequently centered on its theological giants. For this, his work is invaluable in understanding the melody of survival and growth that characterized the era. The message 'it is time to for us to become more patient' is an ample exhortation for the growth of Christianity to generations following the ever-impressive early church."

"Well-known for his scholarship on the early church, Kreider did some incredible research for this book. . . . He makes an excellent case that commitment to Jesus for believers in the first through fourth centuries CE meant, above all, a faith and lifestyle based on patience."

"[Kreider's engaging study interweaves the historical study of a Ramsay MacMullen, the missiology of a Michael Green, and the sociology of a Rodney Stark. Emphases upon a communitarian, nonviolent ethic (à la Stanley Hauerwas) and the character forming nature of worship (à la J. K. A. Smith) reinforce the warp and woof. . . . Kreider's study is thought-provoking and raises interesting questions. . . . Those who read Kreider's book with patientia will be richly rewarded. Knowledge of the past will provide wisdom for the present, and the reader's habitus will be transformed. Perhaps now more than ever, American Christianity in particular needs to learn the virtue of patience, the perils of political shortcuts, and the hazards of pragmatic methodology. Kreider's portrayal of the early church is highly relevant today, serving almost as a commentary on the cultural spirit of the times and the political news of the day."

"[Kreider] has capped his career with a masterwork on the rise of the early church. All future scholars of the subject will need to take account of this volume and its innovative thesis. All Christian readers will be able to benefit from reflection on what Kreider's book means for renewal of the church in our own time."

"Few new books have been as enthusiastically passed around in the Plough office as this overview of Christianity in its first three centuries. . . . Kreider's account, vivid with unforgettable details, will prompt many to wonder: Is the shopworn Christianity of our day the real deal, or merely a diluted version of something far harder and nobler?"

"[Kreider] enlightens us with finding from his study of early-church writings that are at once reassuring, but also quite challenging. The reassuring part for some of us who might feel guilty about our poor showing when it comes to bringing others into the church through verbal witnessing, is that this was not how the early church grew. How the church grew was through the witness of the believers' deeds, their behavior--or 'habitus,' as Kreider refers to it. This is where the 'patience' of the title comes in. . . . Some of us might want to defensively protest that that was then and this is now. I would encourage you to read The Patient Ferment of the Early Church, and even the early fathers--and mothers--on their own. There might be more than we would care to admit that we could learn from a study of these writings."

"Kreider adds a different voice to the study of 'the improbable rise of Christianity in the Roman Empire.'. . . The overall case is persuasive."