A Story from the New Testament World 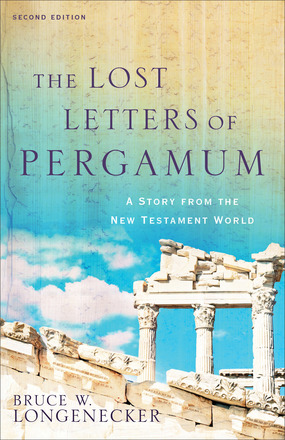 A Fascinating Glimpse into the World of the New Testament

Transported two thousand years into the past, readers are introduced to Antipas, a Roman civic leader who has encountered the writings of the biblical author Luke. Luke's history sparks Antipas's interest, and they begin corresponding. As Antipas tells Luke of his reactions to the writing and of his meetings with local Christians, it becomes evident that he is changing his mind about them and Jesus. Finally, a gladiatorial contest in Pergamum forces difficult decisions on the local Christians and on Antipas.

While the account is fictional, the author is a highly respected New Testament scholar who weaves reliable historical information into a fascinating story. Bruce Longenecker is able to mix fact and fiction to offer a fresh, engaging, and creative way to learn about the New Testament world. The first edition has been widely used in the classroom (over 30,000 copies sold). This updated edition, now with improved readability and narrative flow, will bring the social and political world of Jesus and his first followers to life for many more students of the Bible.

"Using the time-honored form of a collection of letters--one thinks of the collected letters of Pliny the Younger, many from the same area and roughly the same time as these fictive missives--Longenecker provides, by means of an informative and delightful fiction, a remarkably clear and accurate picture of Christian existence in the eastern Mediterranean world of the first century. One comes away from this book--a 'historical novel' in the best sense--both charmed and informed. It is a thoroughly delightful read, from which both beginners and experts will profit."

"Longenecker's Letters present in a fascinating and compelling way the contexts of Second Temple Judaism and Greco-Roman urban life. And the narrative he weaves is not only believable but also engaging, both academically and personally. This untraditional presentation deserves a wide readership among all concerned more traditionally with the ethos of New Testament backgrounds."

"Through the device of an extended correspondence between the evangelist Luke and Antipas, a resident of Pergamum, Bruce Longenecker brings early Christianity to life. The characters are vivid and believable, and they introduce the reader to a rich historical and cultural context. Those familiar with early Christianity will admire the imaginative way Longenecker builds on the best of modern scholarship, and those new to the field will learn a good deal as they eavesdrop on this conversation. This book is both a delight to read and a reliable guide to the beginnings of Christianity."

"A savvy and creative introduction to the New Testament world, disguised as a collection of 'lost' letters between Luke and several well-positioned members of Roman society. The genius of the book lies in its fusion of current New Testament scholarship with a very plausible, personal narrative: the sobering story of one man's shift in allegiance from Caesar to Jesus. Along the way we overhear pagan reactions to Jesus's message and endearing stories from household churches; we sense the perils of sea travel and witness the horrors of the Roman games; we identify with privileged benefactors and hurt for subsistence farmers. Anyone hunting for a reliable, if not always comfortable, guide to the dangerous world of first-century Roman Christianity should be glad these papers were finally 'discovered.'"

"This fictional correspondence is not true, but it certainly could have been. Longenecker writes a very engaging account of several characters who, in their different ways, came to experience and respond to the risen Jesus Christ through Luke's narrative. I was especially moved by the character of Antipas as he is ennobled by being transformed from a Roman dignitary into a model of Christian self-sacrifice."

"This book is a creative and enjoyable story that is true to much of what we know about early Christianity in its environment. The narrative both teaches and engages the imagination as to how events in late first-century Pergamum might have happened."

"Come, you novel readers, and lay aside your farm romances, your prairie narratives, your theological thrillers, your second-coming serials, and pick up the gripping tale of Antipas--historical fiction, empire wide, martyr-deep, too true not to have happened. But beware the power of this story's addiction. Do not begin this book unless you are willing to be putty in the storyteller's hands, for he will force you to take up residence in an old world, about to be reborn in the blood of good souls. No fiction these souls! Real they are, and their reality will cause you to cry out to them, 'Adelphos--Brother! I had to see you die, so I might learn to live.'"

"For a painless introduction to the historical context of early Christian life in Asia Minor, this is the book to get. . . . Longenecker uses the fictitious correspondence as a way of informing the modern reader about everyday life in these ancient times. He composes these letters with skill and helps bring alive--and with great historical accuracy--the conditions under which the earliest Christians lived their faith."

"Although the story is fictional, it is based on a thorough knowledge of the NT world, and should therefore give readers not only a gripping story but also a better appreciation of that NT world."

"A clever book. . . . Many of the letters give the reader a feel for life at the time and also, through the difference between the two writers, a feel for the different ways Christians and pagans understood the world around them."

"[This book] is based upon good historical and socio-cultural biblical scholarship in order to illuminate the social, political, and normal ways of life in the first century. . . . The book is helpful on two levels: it is engaging fiction, and it illuminates a plausible view of the world in which early Christians lived. . . . The fictional and factual weave should spark imaginations and substantive discussions. . . . An enjoyable and informative read."

"[A] supplementary option with promising pedagogical appeal. . . . Longenecker offers a creative avenue for exposing students to cultural and historical backgrounds of the New Testament. . . . [He] must be applauded for his well-written, historically 'true to life' story. . . . This book could be used nicely as a supplementary text for a college or seminary New Testament class."

"Fictional writing is notoriously difficult to do well, but Longenecker has proven himself quite capable. The end result is a highly informative volume that college and seminary students, as well as laypeople, will find enjoyable to read. . . . Lost Letters will also make an excellent supplemental text for a course on NT backgrounds. . . . Most of the fictional reconstructions in the volume [are] not only credible and plausible, but also as helpful in gaining a holistic picture of life at that time. This is an additional virtue of Longenecker's approach that will prove exceptionally valuable to the student of the NT. . . . Longenecker has produced a very interesting and informative account. What a great way to learn NT backgrounds!"

"The importance of this book is the picture it provides of the first-century world of Asia Minor and the situation that many Christians there likely encountered. Longenecker presents a plausible and generally reliable picture of Greco-Roman society in Asia Minor at the end of the first century CE. The narrative format provides an entertaining read, while offering informed insights into early Christianity and its environment. The book would work well as supplemental reading in a course on Revelation or early Christianity."

"Setting this historical novel apart from other fictional history, Longenecker is meticulously accurate in historical detail. . . . Longenecker's historical novel effectively propels the reader into the first-century AD Mediterranean world in a way that a history textbook cannot, as careful character development captures the reader's interest. Thus, one cringes at the cruelty of gladiatorial torture, empathizes with the plight of a peasant, and rejoices at the spiritual transformation of the protagonist."

"The book will be particularly useful to those beginning NT studies and wanting to get into the NT world."

"Longenecker has produced a delightful little book that is both educational and entertaining. . . . This book is not simply historical fiction with the late first century as a backdrop for the events of the narrative. It is a well-crafted description of the context in which some of the early Christians lived. It is a book on New Testament history and culture in narrative form. Longenecker introduces many of the standard people, places, events, and issues raised in academic courses on this subject."

"The value of this work is the captivating way that materials and information about the first century are presented. . . . Longenecker is to be commended for writing such an interesting and powerful story that confronts the reader in a most graphic way with Roman life of the first century, along with the place held in it by Christian believers. . . . It is interesting to read letters that discuss views of Jesus' life and teaching as seen by an inquiring first-century Roman nobleman and the responses Luke makes."

"[The book's] narrative approach proves to be very successful, perhaps doing more than any textbook can to get the reader into the world in which Christianity and the New Testament were born. . . . What emerges from this fictional letter collection is a true-to-life, moving picture of how Christianity probably took root in Asia Minor at the turn of the first century. . . . Lost Letters of Pergamum is an excellent and much needed resource to complement traditional New Testament backgrounds textbooks for courses in Bible colleges and seminaries. . . . While this book is well-suited for formal theological education, it is nevertheless quite accessible to anyone who is interested in finding an entertaining and reliable guide to better understand the historical, social, and political context of Christianity in the first century. . . . Readers will not only be well-informed, but also challenged, much like Antipas was, to evaluate their own loyalties in light of the message concerning Jesus."

"Longenecker's exploration of one man's journey to faith within the matrix of the late first-century Greco-Roman world is worthy of many an encomium. He has a sharp eye for historical detail. . . . His characterization is strong, believable, at times even endearing. . . . As a work of fiction, Letters provides valuable insight into first-century urban life in the Roman Empire, and speculates on some intriguing possible events in early church history. . . . Letters would make an excellent supplement to any New Testament course. . . . The Lost Letters of Pergamum validates the potential for interacting with the biblical narrative, and even with its history, with both imagination and authenticity. As a project in the areas of narratival and historical imagination, Longenecker's book is an exercise that encourages dialogue in biblical studies and early Christian history, but also on broader, story-oriented themes of common interest to other fields of study."