The Kingdom of God as Liturgical Empire

A Theological Commentary on 1-2 Chronicles 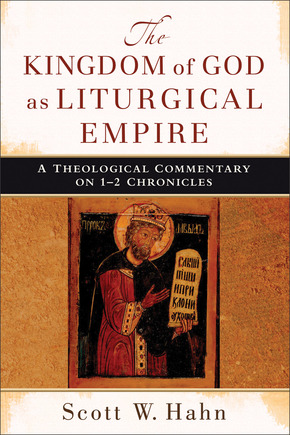 "In this rich theological commentary, Scott Hahn gives a powerful account of Chronicles' inner unity: its creative recollection of Israel's canonical traditions and its inspiring vision of Israel as a priestly kingdom."--Stephen B. Chapman, Duke Divinity School Chronicles offers the first attempt to understand and interpret the entire sweep of Old Testament history from the creation of the world to the Israelites' return from exile. This commentary on 1-2 Chronicles shows how the author of Chronicles reads the Old Testament as the first canonical critic; as such, the Chronicler is the first biblical theologian. Scott Hahn identifies in the Chronicler's work a decisive biblical worldview and highlights the Abrahamic key to the Chronicler's narrative. He also explores how Chronicles provides readers with important insights into key New Testament concepts such as Jerusalem, Zion, the Temple, the church, the Kingdom, and the messianic identification of Christ as King and Priest. In fact, Chronicles is the only work in the Old Testament to use the expression Kingdom of God. The Abrahamic key helps readers see the importance of the Abrahamic covenant in the theology of the New Testament.
Hahn presents 1-2 Chronicles as a liturgical and theological interpretation of Israel's history, emphasizing the liturgical structure and content of Chronicles and providing fresh insight on salvation history: past, present, and future. The book gives professors, students, and pastors a better understanding of Chronicles, salvation history, and theological interpretation of the Old Testament.
Contents
"Now the Records Are Ancient": An Introduction to Chronicles
1 Chronicles
1. Chronicle of All Divine History: A Genealogy of Grace in a Time of Exile and Restoration (1 Chr. 1-9)
2. Highly Exalted for the Sake of His People Israel: The Rise of David and His Kingdom (1 Chr. 10-16)
3. His Throne Shall be Established Forever: God's Covenant with King David (1 Chr. 17)
4. God Gives Rest to His People: The Beginnings of the Temple-Kingdom Age (1 Chr. 18-29)
2 Chronicles
5. Liturgy and Empire: Theocracy in the Temple Age (2 Chr. 1-9)
6. In Rebellion Since That Day: After the House of David Is Divided (2 Chr. 10-28)
7. Exile and Return: The Fall and Rise of the Kingdom (2 Chr. 29-36)
Indexes

"For many Christians, the Old Testament is still a closed book, unconnected to the great themes of the church's proclamation and the believer's walk of faith. In this rich theological commentary, Scott Hahn gives a powerful account of Chronicles' inner unity: its creative recollection of Israel's canonical traditions and its inspiring vision of Israel as a priestly kingdom. The church, the sacraments, Marian devotion--these are all shown to have their roots in Chronicles in this profoundly Catholic reading that also offers a bracing rebuke to the long, sad history of Protestant disparagement of ritual, priests, and temple worship in the Bible."

"Scott Hahn's brilliantly illuminating commentary on First and Second Chronicles represents an important contribution to the renewal of biblical scholarship. Demonstrating a master's command of the entirety of biblical revelation, Hahn shows how the Chronicler both gave focus to the story of Israel and provided the foundation for much of the New Testament meditation on Jesus as Messiah and Son of David. This book is written with extraordinary passion and intelligence. I would recommend it warmly to both scholars and preachers."

"Scott Hahn's The Kingdom of God as Liturgical Empire is a scriptural symphony, weaving together themes from Old and New Testaments into a remarkable theological synthesis. Hahn deftly shows the Chronicler's work for what it is: a rich tapestry that reveals the ways of God with his people Israel in the past, as well as offering hope that God will ultimately fulfill the promises made to his servant David. This lucid and insightful volume deserves to be on the shelf of anyone interested in the burgeoning field of theological interpretation of Scripture."

"During his public ministry, Jesus of Nazareth spoke about the 'kingdom of God' more than any other theme. Yet the exact meaning of the phrase continues to be debated, and the precise expression, 'Kingdom of the LORD,' appears in only one part of Jewish Scripture: the books of Chronicles. In this masterful commentary, Scott Hahn shows that an essential key to understanding the biblical concept of the kingdom lies hidden in the often overlooked work of the Chronicler and his history of the liturgical empire of David. In this book, Hahn has produced something very rare: a commentary that is rigorously exegetical, profoundly theological, and a must-read for both Old and New Testament scholars. This is biblical theology at its best!"

"Drawing upon a wide array of Jewish and Christian interpreters, Hahn persuasively presents 1 and 2 Chronicles as a powerful exemplar of the typological, covenantal, and liturgical exegesis that has shaped the Christian tradition of biblical interpretation. For readers (like myself) who have tended to think of the Chronicles as rather dull, this book will reintroduce the richness of Scripture."

"I have always been impressed by Hahn's uncanny ability to not only hear and see both the wider and specific meanings of the biblical text--especially understanding the OT in the light of the NT--but to convey this meaning vividly for serious lay readers and scholars alike. Here Hahn demonstrates what Pope Benedict XVI has affirmed, that authentic biblical criticism can be done best with a hermeneutic of faith and continuity. A thoroughly enjoyable read that shows how the key of liturgy unlocks a much deeper understanding of the whole of Scripture, I believe this is Hahn's magnum opus."

Marcus Grodi, author and host of The Journey Home (EWTN)

"An unconventional and intriguing commentary on the book(s) of Chronicles. . . . One test of a commentary on Chronicles is its ability to make good sense of the book's peculiar beginning and ending, and Hahn makes helpful progress on both counts. . . . For too long Christian biblical scholarship has sought to emphasize the discontinuity between Second Temple Judaism and the church. This is a nicely written and well produced volume that seeks in a particular way to overcome that tendency. Regardless of whether one thinks this is the best approach to doing to, the effort is highly instructive and most welcome."

"Hahn has written a scholarly commentary that doubles as spiritual reading in the sense intended by Benedict XVI in the Apostolic Exhortation Verbum Domini."

"An intriguing work, which seeks to demonstrate the overall theological message of Chronicles within the whole story of the Bible."

"A welcome and thorough addition to a growing body of monographs that focus upon this neglected part of the corpus, and that approach the books [of 1 and 2 Chronicles] in terms of usefulness to the faithful community. . . . The book's greatest strength is its exploration of the Chronicler's deft use of typology as not merely a literary technique but a theological reading of salvation history. Compelling insights are offered. . . . Also key is the emphasis upon liturgy coupled with covenant, as well as an apologia for the primacy of worship among God's people. . . . The significance of the Chronicler's work for the Church is made clear. . . . This is a well-conceived volume, rich in detail and insight, delightful in turn of phrase, thought-provoking, and invaluable for those who read the Bible in the context of faith, but not merely devotionally. It deserves to be well received in academic and ecclesial circles alike."

"[This book] is filled with insightful textual observations. Furthermore, the book is a valuable resource for detecting the underlying unity of Chronicles and the theological and canonical framework that undergirds the work. It is also a valuable contribution to discerning the role that Chronicles may play in the Bible's theology."

"Scott Hahn's new commentary on 1-2 Chronicles is by far and away the most important book I've read this year. That's not an overstatement. Full of stunning insights--with implications for both Old Testament and New Testament studies--this book should really be on your priority list. If you're familiar with the hype about Hahn's work, but never read any of his scholarship, read this title. . . . It is incredibly clear and well-worth the time of anyone is who is at the 'intermediate' level of biblical studies. . . . [Hahn's] work has important ramifications for liturgical theology, fundamental theology (e.g., what is revelation?), and ecclesiology."