by: Terry A. Smith 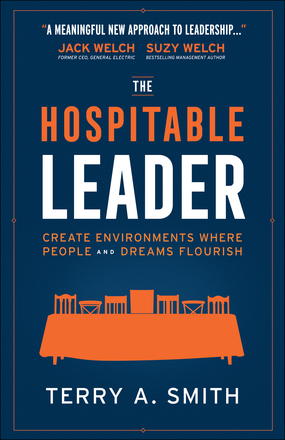 Everyone is a leader somewhere. Whether a parent, pastor, coach, or CEO, anyone can learn to lead hospitably.

Hospitable leadership is a big idea. An urgently needed idea. In a world that far too often feels inhospitable, people are longing for leaders who create a climate that brings diverse people together to achieve desired and meaningful results. That's what hospitable leaders do. Hospitable leaders create environments of welcome where moral leadership can more effectively influence an ever-expanding group of people to accomplish worthy goals together.

Terry Smith has lived this paradigm-shifting message and has grown an incredibly diverse congregation with a robust leadership culture in the New York City metropolitan area.

In The Hospitable Leader, he shares how to warm people's hearts so they are more receptive to your leadership efforts. The many keys you will discover include how to

Practicing leadership with a hospitality mindset is the right way--the moral way--to lead people. But when understood properly, hospitable leadership has a radical edge.

And it brings revolutionary results.

"The Hospitable Leader presents a meaningful new approach to leadership that is sure to improve the organizations that embrace it. Terry Smith's deep commitment to moral leadership, dignity, and diversity shine through on every page."

"This is one of the most inspiring leadership books I have read in a decade. . . . Terry Smith is a wordsmith with a gift for igniting a passion that makes us long to become the leaders God created us to be. You. Will. Love. This. Book!"

"The Hospitable Leader is Terry at his best as a thinker, writer, and leader. . . . This is a fantastic and important read."

"Joel Osteen and I count it an honor to have access to Terry Smith's leadership insight and impartation. . . . This may be the most important book on leadership I have read in more than a decade."

"Hospitality and leadership are not often words that coincide, but this book proves how the ideas are inseparable."

Mark Batterson, pastor and bestselling author of The Circle Maker

"Pastor Terry has certainly had a positive influence on my life as a father, husband, and leader. . . . I know he will have the same impact for readers."

"See how caring, warm relationships can surpass technology and tactics as approaches to extraordinary organizational success."

Dan Miller, bestselling author of 48 Days to the Work You Love

"I have known Terry Smith for a long time and if anyone can speak to the topic of leadership and hospitality it is certainly him. A visit to The Life Christian Church has always been a pleasure and I've always brought it back to the hospitality. There is an atmosphere of 'being at home.' Terry and his wife, Sharon, set that atmosphere."

"I have had the honor to call Terry Smith my friend for many years. I have seen him live out these principles of leadership in his life. The Hospitable Leader easily guides you to the next level you desire to get to."

"Terry Smith knows what it takes to become the kind of leader people want to follow, and in The Hospitable Leader he shares the surprising keys to creating environments where people thrive and realize their God-inspired dreams. Whether you're a CEO, pastor, or parent, you will be equipped to adopt this unique leadership paradigm and unleash the power it brings to effectively influence others."

"Reading this delightful book put a smile on my face and stirred up a desire in me to become a more hospitable leader. I had never strung together the words hospitable and leader but now I see how beautifully they go together."

Nancy Beach, leadership coach, Slingshot Group, and author of Gifted to Lead: The Art of Leading as a Woman in the Church

"The Hospitable Leader is a practicum on leadership and teaching built on the twenty-six years Terry Smith spent building and equipping leaders in one of the most diverse churches in the United States. My success as a professor in 'the greatest urban university in the world' is based on these principles."

"In my frequent travels, I have rarely met a leader and a church more hospitable. I am thrilled that Terry is sharing some of his secrets to hospitality with other leaders and churches. Hospitality is one of those underrated biblical concepts, and yet it has the potential to transform our workplaces and churches in ways that make the warmth of the Gospel more accessible for the people who need it the most."

"Terry Smith wants the church of Jesus Christ to shine for Him! But in his new book The Hospitable Leader he wisely points out that the message must always include the kindness, encouragement, and compassionate understanding that everyone needs. His book will both inform and inspire you!"

"Terry Smith has once again written a cutting-edge leadership book that engages both mind and heart. On numerous occasions I have been blessed to personally witness the principles set forth in The Hospitable Leader as I visited the church he leads. With this thoughtful and captivating offering, I now have a much greater insight into how the richness of the diverse culture was intentionally created. This is a must-read for leaders desiring to glean new insight on creating a hospitable environment."

"In The Hospitable Leader, Terry Smith challenges leaders to create positive environments, and transform the inhospitable places. No matter the place or position, the climate we set as leaders matters. This read will enrich the heart of any organization."

Chris Durso, author of The Heist: How Grace Robs Us of Our Shame

"Wow! The Hospitable Leader is more than a book--it is a guide, a total paradigm shift for leaders. It masterfully captures the leadership of Jesus, which makes it captivating. Every sentence evokes a big YES deep down in your soul. It's the simplicity of this concept that makes it so profound. It takes something you knew but had tucked away, like an old recipe brought back to be the star of the meal. Great job!!!"

"Given the constant expectations and demands on leaders, being hospitable can be easily overlooked. Yet, it's a prerequisite for effective leadership. Using clear, simple language, Terry Smith provides us with tools to help us excel in creating a hospitable culture for those we lead. His leadership take-homes at the end of every chapter will make you a 'doer.' The Hospitable Leader is an enjoyable must-read for anyone aspiring to influence others for the Kingdom of God."

"In a world torn apart by animosity and polarization, we need more hospitable leaders! Practical and substantive, this book invites us to lead well by first serving well, opening our doors to our neighbors, and embracing a much more welcoming picture of home."

Peter Greer, president and CEO, HOPE International, and coauthor of Rooting for Rivals

"Terry Smith has found a hidden ingredient in successful leadership: hospitality. We have all known driven, angry, overbearing, or controlling leaders in our lifetimes. It's sad, but a kind, inclusive, hospitable leader is far too rare. Terry lays out a formula found in the ancient wisdom of the Scriptures that seems modern and new. I not only fully recommend reading but also applying The Hospitable Leader to your life. You will go further and be happier and more fulfilled doing it!"

"The Hospitable Leader echoes Peter Drucker's insight, 'Good manners are the lubricating oil of an organization.' Mr. Smith will open new doors with his values-based words."

"In The Hospitable Leader, Terry Smith has served up fantastic food for thought and leadership nuggets. Get ready for a fresh approach to leadership and life that is inviting and enticing to others while growing the reader with applicable truths and tools. Terry's entertaining and intellectual approach, blended with years of hands-on hospitable leadership, makes this book a must-have for every leader's bookshelf."

"Terry Smith has discovered the power contained in a welcome. And now The Hospitable Leader is available to all of us and provides a practical roadmap for building a hospitable and welcoming organization, church, or business. Making people feel welcome is vital for all of us, regardless of where we live and work. Terry and the team at The Life Christian Church do this incredibly well!"

"Leadership is multifaceted. If you've been leading for any length of time, you know this. In The Hospitable Leader, Terry shines an important light on the value of hospitality in leadership and the power of what happens when it's a central part of who we are as leaders. If you think hospitality is simply a task for your team, you're missing this."

"If his notion of hospitable leadership is not universally taught now, it should be. Pastor Terry Smith carefully and clearly outlines a leadership style that is too often absent in this modern world. A blueprint for both people in leadership and for all of us in our daily lives."

After fifteen-plus years of working in the Church and in business, I've seen the power in paying attention to hospitality and creating a welcoming environment for everyone. The crazy thing about this is that so many people do not do this successfully or see it as a leadership issue. It's 100 percent a leadership decision, and I'm so thankful for my good friend Terry Smith diving into the power of this principle!"

"The Hospitable Leader by Pastor Terry--a must-read to be a WINNING leader! It is practical, inspirational, and definitely timely. This is taking leadership to the next dimension. Not just IQ + EQ but demonstrating love, compassion, and grace as a leader, with Jesus as our example!"

"All readers, whatever their leadership level or spiritual bent, will find much to stimulate their thinking in this book. Its breadth and elegant simplicity, the various leadership tenets explored, and the soundness of concepts will stir both the heart and mind. As Terry has done throughout his career, he helps us again think more clearly about ways to lead."

"Regardless of whether you are a CEO, a line supervisor in a factory, a teacher, a service provider, a parent, or a student, The Hospitable Leader has something for everyone. Pastor Terry does a remarkable job in explaining to us how to lead hospitably, while showing us, by example after example, how Jesus did the same."

"Terry has an incredible way of guiding the reader through what it means to be a true leader. This book is a go-to for anyone who is interested in becoming a stronger team member and overall leader in their organization."

Jarrid Wilson, pastor and author of Love Is Oxygen