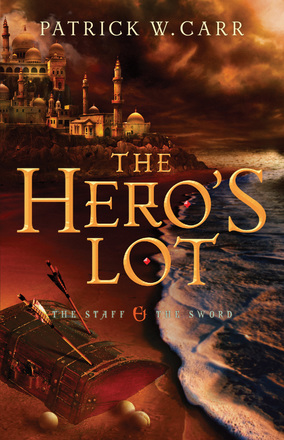 With the King Near Death, Will the Kingdom Fall?

When Sarin Valon, the corrupt and dangerous church leader, flees the city of Erinon and the kingdom, Errol Stone believes his troubles have at last ended. But he and his friends still have dangerous enemies working against them in secrets and whispers.

In a bid to keep them from the axe, Archbenefice Canon sends Martin and Luis to Errol's home village, Callowford, to discover what makes him so important to the kingdom, and in that journey they discover amazing new secrets about the workings of Aurae.

Back in Erinon, Errol is unjustly accused of consorting with spirits. Convicted, his punishment is a journey to the enemy kingdom of Merakh, where he must find Sarin Valon and kill him. To enforce their sentence, the church leaders place Errol under a compulsion--he must complete his task, or die trying.

"The Hero's Lot is a spellbinding, edge-of-your-seat thrill ride that will leave you breathless and reeling from the truly masterful and immensely pleasurable writing of Patrick W. Carr."