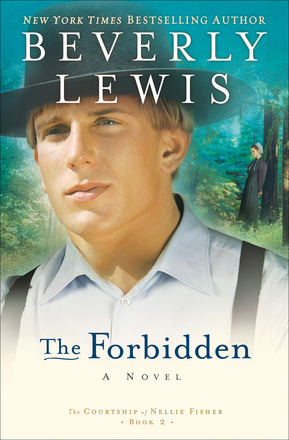 The Church Split Has Not Extinguished Their Love,
But the Demands of One Man Still Stand in Their Way•.
Caleb Yoder's father has forbidden him to court Nellie Mae Fisher, but words alone cannot stop Caleb's devotion. Yet if he continues to pursue Nellie, he risks losing everything.
Nellie, too, is torn. She longs to marry her Old Order beau but cannot ignore the gentle pull she feels toward the faith of her New Order family. Can she and her beloved satisfy the expectations of the People while remaining true to their hearts?

"Lewis's well-developed characters and absorbing plot will have fans looking forward to the next installment. Highly recommended for all collections."
--Library Journal (starred review of The Preacher's Daughter)

"One of Christian fiction's most beloved authors of the gentle read offers a new series called Annie's People, set in Paradise, PA. Culinary details, glimpses into the workings of Amish life and strong character development help readers stay with the story's multiple changes of perspective. Plot hints in the final pages will keep Lewis's loyal fans eagerly anticipating the next installment."
--Publishers Weekly (about The Preacher's Daughter)

"Beverly Lewis writes an appealing and inspiring glimpse at a 1950s Amish community."
--Midwest Book Review (about The Prodigal)

"Master storyteller Lewis adds greater depth to her characters and draws a compelling portrait of the insular Amish community.... Highly recommended."
--Library Journal (about The Englisher)

"Her writing is as...richly patterned as [Amish] quilts, and just as enjoyable to get wrapped up in."
--ForeWord Magazine (about The Sacrifice)

"Lewis' readers can't get enough of her tales about Amish life, and this latest insatallment won't disappoint." --Publishers Weekly

"A wonderful continuation of The Parting. Beverly Lewis does a wonderful job of story telling that pulls you in and makes you want to stay until the end." --Barb Maskel, BookBargainsandPreviews.com

"Nellie Mae Fisher's family is New Order Amish, and Caleb Yoder's is Old Order. His father has forbidden him to court Nellie. No one does Amish-based inspirationals better than Lewis."
--John Charles and Shelley Mosley, Booklist, September 15, 2008