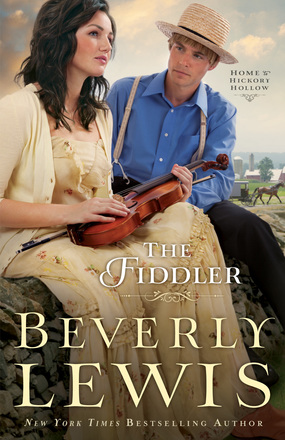 A wrong turn in a rainstorm leads Englisher Amelia Devries to Michael Hostetler--and the young Amishman's charming Old Order community of Hickory Hollow. Despite their very different backgrounds, Amelia and Michael both feel hemmed in by the expectations of others and struggle with how to find room for their own hopes. And what first seems to be a chance encounter might just change their lives forever.

"Much of the credit [for the growth of Amish fiction] goes to Beverly Lewis, a Colorado author who gave birth to the genre in 1997 with The Shunning. . . ."
--Associated Press

"Author Beverly Lewis has come up with a new magic formula for producing best-selling romance novels: humility, plainness and no sex."
--Time magazine

"Amelia Devries finds herself living an artistic double life: she's a talented concert violinist who's also very good at fiddling. But fiddling doesn't fit into the plans of her musician boyfriend, her violinist father, or her agent. When a severe thunderstorm strands her in the rural mountains of Pennsylvania, she takes refuge at a cabin inhabited by Michael Hostetler, a young fence-sitting Amish man who can't decide whether to take the formal vows to join the Amish community. Her chance connection with Michael allows Amelia an opening into his community, while Michael finds himself increasingly attracted to the outsider. Lewis's presentation of Amish life portrays the advantages and disadvantages of a community with definite rules and a solidarity that can be both enviable and constraining. The musical motifs offer welcome variation on very familiar Amish themes that Lewis renders in virtuoso style. This opens the Home to Hickory Hollow series, but stands alone nicely."
--Publisher's Weekly, February 13, 2012