The Fall of Interpretation, 2nd Edition

Philosophical Foundations for a Creational Hermeneutic 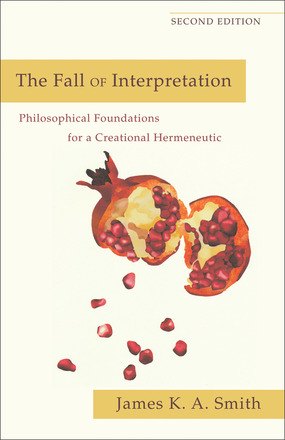 "This second edition, with a new introduction and an added chapter that draws on Smith's further years of philosophical, theological exploration, makes an even more powerful claim for the attention of anyone concerned about the prospects for hermeneutics."--A. K. M. Adam, University of Glasgow In this provocative book James K. A. Smith, one of the most engaging Christian scholars of our day, offers an innovative approach to hermeneutics. The second edition of Smith's well-received debut book provides updated interaction with contemporary hermeneutical discussions and responds to criticisms.
Contents
Preface to the Second Edition
Preface to the First Edition
Reconsiderations: An Introduction to the Second Edition
Introduction: Interpretation and the Fall
Part 1: The Fallenness of Hermeneutics
1. Paradise Regained
2. Through a Mirror Darkly
Part 2: A Hermeneutics of Fallenness
3. Falling into the Garden
4. Edenic Violence
Part 3: Toward a Creational Hermeneutic
5. Interpreting the Fall
6. Interpretation in Eden
7. Limited Inc/arnation: From Creation to Ecclesia
Index

"With the absence of an 'interpretive police,' in the first edition of The Fall of Interpretation, James K. A. Smith worried how to keep at bay the charge of relativism. This revised edition unambiguously affirms the particularity of the Nicene tradition as the locale for genuine interpretation of Scripture. Smith cogently argues that we need the church's authoritative theological interpretation of Scripture to live with the varying degrees of the author's 'real presence' in the text."--Hans Boersma, J. I. Packer Professor of Theology, Regent College

"The first edition of James K. A. Smith's Fall of Interpretation cast a clear, sharp light on the important topic of difference in interpretation, and the contribution he made to the theological understanding of hermeneutics has still not been fully appreciated. This second edition, with a new introduction and an added chapter that draws on Smith's further years of philosophical, theological exploration, makes an even more powerful claim for the attention of anyone concerned about the prospects for hermeneutics."--A. K. M. Adam, lecturer in New Testament, University of Glasgow

"In the hands of the unskilled or unwise, hermeneutics can be dangerous, fueling a blaze of apocalyptic fire where interpretation dissolves creaturely goodness into a relativistic morass. Nonetheless, as Smith persuasively argues, interpretation is inevitable. To reject it for 'immediacy' is to close one's eyes to the obvious. Smith shows how hermeneutics emerges not from our sinfulness but from our creaturely goodness. This second edition guides the reader along Smith's own path, resisting the 'emergent' temptation in favor of 'catholic' substance."
--D. Stephen Long, professor of systematic theology, Marquette University

Praise for the first edition:

"The ineluctable plurality of interpretation, both of texts and of the world, belongs to creation in its goodness and not (merely) to the Fall. That is the thesis of this bold challenge to a whole spectrum of thought, which ranges from evangelical theology to deconstructive philosophy, that finds interpretation to be inherently fallen. On the basis of an Arminian Augustinianism [sic] and a Kuyperian Calvinism, Smith sketches a creational interpretation of interpretation. Both the critique of the contemporary consensus and the constructive alternative deserve widespread discussion. The scholarship is impressive and the writing is lucid."--Merold Westphal, distinguished professor of philosophy, Fordham University

"The Fall of Interpretation represents a major contribution to the ongoing discussion between Christian theology and contemporary continental philosophy. . . . This is a brilliantly argued book from a major new voice in contemporary hermeneutical theory."--John D. Caputo, Thomas J. Watson Professor of Religion and Humanities and professor of philosophy, Syracuse University

"Smith argues that the first edition was a postfundamentalist work, but did not directly privilege the catholic over the emergent, and sees the catholic trajectory as 'more persistently postmodern.' He remedies this with the second edition, in addition to having a greater emphasis on Scripture, revelation, and the church. . . . [This book] would . . . benefit scholars and pastors interested in hermeneutics and the theological interpretation of Scripture."--Shaun C. Brown, Englewood Review of Books

"[Smith] clearly highlights an important theme common to both the Christian theological tradition and to phenomenology which identifies the finite conditions of humanity with sin or violence, respectively. . . . He rightly criticizes commonplace evangelical instincts to link the limits of human knowing and interpretation as well as interpretive pluralism with sin. . . . Smith examines several evangelical thinkers and phenomenologists. . . . His exposition of the latter is impeccable; in reading this second edition I was again reminded of the unique skills he possesses in explaining accurately and clearly the oftentimes opaque writings of these primarily German and French philosophers. . . . In the end, the primary punch of Smith's book, then, is not about interpretation per se. It is about theological anthropology. It is a defense of the idea that the conditions of human finitude are originally and perennially 'good.' These conditions do not only frame the act of interpreting texts or experience, they frame each and every activity and practice in which human beings engage. In this regard his arguments about the conditions for interpretation actually have much larger and longer significance and importance. His is a defense of the integrity and worthiness of all practices of human culture-making against a longstanding and currently quite fashionable bias which sees them as destructive and distortive. For that reason alone this book deserves to be reissued and read widely."--Mark Bowald, theotherjournal.com

"Smith masterfully argues that the One who created male and female declared embodiment 'good.' Embodiment, however, implies multiple perspectives on truth, each individual situated in time and space differently. The concept of plural perspectives, therefore, as Smith convincingly argues, reflects not the Fall into sin, but instead a falling into line with God's creative plan. . . . Smith argues for the special providence of the fall with brilliant elegance. . . . The Fall of Interpretation is a gift."--Crystal Downing, theotherjournal.com

"[Smith's] book will speak especially to those who have found a fundamentalist hermeneutic of 'immediacy' lacking, but who remain dissatisfied with the alternatives offered by 'emergent' theologians. . . . This second edition includes a significant new chapter where Smith retraces his original trajectory and considers its implications in terms of the way in which church communities might function as interpretative communities. . . . If we do not address our hermeneutic of scripture, we will struggle to adequately address our presenting issues. Smith's book is a helpful contribution to this debate, and offers an interesting and fruitful approach. . . . Smith's approach is to root his Christian general hermeneutic in a theology of creation, and he argues that interpretation is not a consequence of human fallenness but rather should be affirmed as a part of the goodness of creation. He engages methodically and in detail with some key proponents of various hermeneutical positions, and through this dialogue outlines his own constructive proposals."--Simon Woodman, Regent's Reviews

"Smith's fluid prose will tempt the busiest of readers to slow down and make time for the details of his argument. The book evinces a careful and creative reading of primary texts, presents a well-argued and provocative thesis, and speaks to difficult questions with clarity and grace. Recommended for readers of Smith's Who's Afraid of Postmodernism?, as well as those with more general interest in the field of philosophical hermeneutics."--Christopher R. Brewer, Transpositions

"This book does not provide breezy reading, but if you happened to be concerned with how we interpret our biblical texts (particularly in an environment where most kinds of authoritative interpretations are thrown out the window), you will likely find Smith a helpful and engaging resource. Smith navigates a wide range, from Augustine to Derrida, to arrive at his account of a 'creational hermeneutic' grounded in the history of how God has spoken in the church through the ages."--Winn Collier, Religious Herald

"[Smith] is a prolific writer and fertile thinker who is hard to pigeonhole but well worth getting to know. . . . [A] valuable new edition of his provocative first book. . . . [It] is more a reframing than a revision . . . since the main text of the original six chapters and original introduction of the book is unaltered, but is placed in a new context by new introductory material and an extra concluding chapter, along with new footnotes helpfully indicated by square brackets in which the elder Smith expands on, nuances, and occasionally disagrees with the arguments given by the younger Smith. . . . Perhaps of particular interest to Christians in literary studies is Smith's take on Derrida. . . . Smith, younger and elder, is a thinker with whom it is worth wrestling to clarify our own interpretations of interpretation."--David Parry, The Glass