What the Bible Does and Doesn't Say about Human Origins 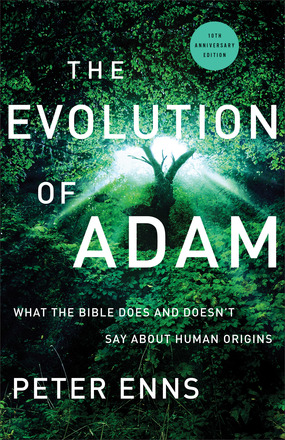 Can Christianity and evolution coexist? Traditional Christian teaching presents Jesus as reversing the effects of the fall of Adam. But an evolutionary view of human origins doesn't allow for a literal Adam, making evolution seemingly incompatible with what Genesis and the apostle Paul say about him. For Christians who both accept evolution and want to take the Bible seriously, this can present a faith-shaking tension.

Popular Old Testament scholar Peter Enns offers a way forward by explaining how this tension is caused not by the discoveries of science but by false expectations about the biblical texts. In this 10th anniversary edition, Enns updates readers on developments in the historical Adam debate, helping them reconcile Genesis and Paul with current views on evolution and human origins. This edition includes an afterword that explains Enns's own theological evolution since the first edition released.

"Pete Enns offers us another masterwork. With Enns's characteristic accessibility, The Evolution of Adam is a road map for how Christians of sincere faith can understand scriptural depictions of human origins while also accepting the theory of evolution via natural selection as scientific fact."

"If you're not Christian, you might be surprised to learn that Christians fight a lot about the Bible's debut character, Adam--or maybe not. Christians fight about a lot. If you are a Christian, you should buy Pete Enns's book. I bought it in graduate school and was unforgettably impacted by its rare combination of scholarship and soul. You will not find a more honest and empowering book on the origins of life than this one."

"Pete Enns's still-relevant The Evolution of Adam is thoughtful, accessible, and timely. Enns facilitates a conversation between traditional approaches to reading the Scriptures and scientific understandings of the world, the cosmos, and the human species. He does this by drawing attention to the contexts in which the Scriptures were produced and interpreted and by discussing how those contexts contribute to an understanding of Scripture that may be new to contemporary readers. His synthesis respects the faith and good intentions of religious readers as well as the scholarly and scientific bodies of knowledge of the last three centuries without constructing some sort of Frankensteinian hybrid. His nine theses provide a concise, comprehensible approach to what can be a difficult conversation."

"The Evolution of Adam is geared to Christians who hold a high regard for Scripture while remaining cognizant of its incongruities with the natural sciences. Enns revisits the evolution-creation debate, not to prove science or Scripture right or wrong or to find some unsatisfying coexistence between contrary thoughts but to read Scripture while seriously considering what evolution can contribute to the discussion. Such an approach can lead Christians to a new synthesis that frames Genesis and Paul in new ways."

"The primordial story of Adam, in Pete Enns's hands, becomes a vantage point from which to explore the ancient world of the Jews and their neighbors, the relationship between science and Scripture, Paul as an interpreter, the development of the Hebrew Bible, the development of Christian thinking about the Hebrew Bible, and much more. It's rare to find serious scholarship conveyed with such clarity and relevance. It's a highly informative book that concludes with nine theologically significant theses. A significant book for scholars and a rewarding read for the curious Christian."

"The Evolution of Adam provides a sure-footed and engaging look at what the Bible says--and does not say--about the first man. Peter Enns, one of America's most important Old Testament scholars, provides a masterful and accessible survey of the relevant biblical scholarship from the past couple centuries. Enns combines a deep appreciation of the Christian tradition with a courageous willingness to go where most evangelicals fear to tread. I highly recommend this book."

Karl Giberson, author of Saving Darwin: How to Be a Christian and Believe in Evolution

"In this book, Peter Enns deals with one of the most challenging issues facing Christians today: the historicity of Adam. Was there really a man named Adam from whom all men and women descend? How are we to understand the story of Adam? More importantly, how are we to understand Paul's theological use of Adam? Enns is well equipped to deal with these volatile issues, holding a PhD from Harvard University in Old Testament studies and having taught for thirty years at various evangelical seminaries and colleges. With grace and incisive scholarship he offers a provocative thesis that will certainly interest and challenge the church. From my perspective, Enns fulfills Jesus's commandment that we love the Lord our God with all our mind (Matt 22:37), and he does so fearlessly and faithfully."

"For too long evangelical Christians have dodged the implications of modern biology for our understanding of the Bible and theology. Foremost, we have failed to face the unassailable fact that death, rather than being the historical consequence of Adam's sin, was a part of the natural cycle that created our forebears. What shall we do with Genesis and Paul in light of these facts? Enns blazes a trail that engaged Christians can follow."