The Economy of Desire

Christianity and Capitalism in a Postmodern World 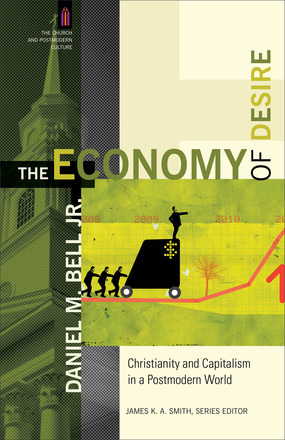 "This is the most thoroughly researched and accessible book on theological economics available today. Its breadth is impressive, its argument compelling. It deserves to be widely read and used at all levels in the university and church."--D. Stephen Long, Marquette University

In this addition to the award-winning Church and Postmodern Culture series, Daniel Bell compares and contrasts capitalism and Christianity, showing how Christianity provides resources for faithfully navigating the postmodern global economy. He approaches capitalism and Christianity as alternative visions of humanity, God, and the good life. Considering faith and economics in terms of how desire is shaped, he casts the conflict as one between different disciplines of desire.

Bell engages the work of two important postmodern philosophers, Gilles Deleuze and Michel Foucault, to illuminate the nature of the postmodern world that the church currently inhabits. He considers how the global economy deforms desire in a manner that distorts human relations with God and one another. In contrast, he presents Christianity and the tradition of the works of mercy as a way beyond capitalism and socialism, beyond philanthropy and welfare. Christianity heals desire, renewing human relations and enabling communion with God. This book will work well for courses in theology and ethics, philosophical theology, discipleship, and Christianity and culture. Pastors and church leaders will also find it enlightening.

Contents
Introduction: What Has Paris to Do with Jerusalem?
1. The Multitude: The Micropolitics of Desire
2. Capital Desire: Capitalism as an Economy of Desire
3. What Is Wrong with Capitalism?
4. Capitalist Theology: The Agony of Capitalist Desire
5. Is Another Economy Possible? The Church as an Economy of Desire
6. The Economy of Salvation
7. Christian Economics
8. The Work of Mercy
Conclusion: Dishonest Wealth, Friends, and Eternal Homes
Index
About the Series
The Church and Postmodern Culture series features high-profile theorists in continental philosophy and contemporary theology writing for a broad, nonspecialist audience interested in the impact of postmodern theory on the faith and practice of the church.

"There is no getting around the cry for a just Christian economics in Bell's argument, nor the vision for a virtuous market participating in the divine economy of salvation. Bell's passion is prophetic, and this book screams out to be read in the new era of austerity that all of us are entering now. A revolution is needed, and it has to begin with a right disciplining of desire."

"Dan Bell persuasively demonstrates that every economy presupposes a theology because they share in common the production, distribution, and communication of desire. Using Deleuze and Foucault without being used by them, he diagnoses the formation of capitalist desire and compares it to God's ecclesial economy. This is the most thoroughly researched and accessible book on theological economics available today. Its breadth is impressive, its argument compelling. It deserves to be widely read and used at all levels in the university and church. Readers will be richly rewarded."

"We need books that ask us to think carefully, and in a Christian manner, about what an economy is ultimately for. Bell's The Economy of Desire enables us to go deeply into the heart of today's economic activity so we can assess its inspiration in Christ and its participation in God's redemptive work in the world."

"In dialogue with postmodern philosophers and theologians, Daniel Bell delves perceptively into human desire and the ways desire is held captive by the culture and structures of capitalism. He matches his expertise in this endeavor with a sensitive and imaginative mining of the monastic traditions to elaborate a biblical economy of desire that serves life against death. The result is a rich portrayal of practices from which every congregation can benefit in this time of economic and political tumult. This book is a creative blend of urgency, realism, critical acuity, and spiritual depth."

"The most dangerous act in the world today is to believe, to desire. But desire alone is not enough. Bell's book is radical because he teaches us not just how to desire but the content of desire itself--a desire for God, for the good, for something bigger than ourselves. The Economy of Desire is the manifesto for restoring dignity in the wake of injustice."

"Capitalism has seeped into virtually every corner of the globe and claimed sovereignty over material resources, human bodies, and conceptual imaginations. It is for this very reason that the philosophical and theological reflection done so masterfully by Bell in this book is needed today, especially in the church. . . . Like the rest of the books in the marvelous Church and Postmodern Culture series, [this book] is full of accessible, engaging, and practical insights related to philosophical knowledge and theological insight. Bell has a gift for drawing the reader in and clearly presenting complex thoughts. . . . We are all indebted to Bell for providing us with this map showing us the way from our imprisonment in capitalist desire to the abundant life made possible by Jesus. I cannot recommend this book highly enough."

"Bell joins a chorus of voices offering a sustained theological critique of capitalism, but he does so with a particular concern for providing guidance to the church. . . . By uncovering the central doctrines of 'capitalist theology,' especially its anthropology of insatiable desire, Bell hopes to clear the way for the church to model a 'healing of human desire turned outward to service and gift, all for the sake of community.'"

"This book is of great use to scholars or church leaders with interests in theology and economics. Bell's treatment is clear, reasonable and often highly imaginative."

"Bell presents a compelling moral and theological exploration and evaluation of capitalist economic life. . . . Bell's excellent study courageously explores the pressing questions concerning the conflicted relationship of Christian life to the economic sphere. . . . This well-written and carefully argued work should be welcomed by all who are interested in the complex moral questions about economic life in our time. Bell's engaging theological and moral analysis also presents a wise and inspiring spiritual vision."

"A theologically rich account of how capitalism functions to mis-shape our desires . . . and how the church redirects our desires to their true end in God. . . . Bell has given the church the gift of a profoundly theological and readily accessible discussion of two economies of desire, capitalism and the church. It is well-suited for classroom and parish alike, and all can read it with profit."

"This work is commendable for taking a sample of postmodern economic theory and appropriating it into a biblical-theological framework from which the church may see that capitalism is a teleological cul-de-sac from which humanity escapes only by being re-formed by the Word and sacraments. Bell's emphasis on human desire and the necessity of its proper object being God is why capitalism must be eschewed, for the triune God and communion with him is the true end of humanity."

"I recommend The Economy of Desire to readers who are looking for an accessible and thoughtful treatment of the church's relationship to capitalism. . . . It is . . . a creative and robust proposal of a distinctly Christian vision of economics in the midst of the global capitalist economy."

"A thought-provoking and incisive analysis of capitalism and Christianity. . . . The Economy of Desire succeeds in its aspirations, clearly explaining the thought of Deleuze and Foucault in an accessible and accurate fashion, while deploying these postmodern thinkers in an insightful way. . . . The contrast that Bell develops between 'capitalist theology' and Christian theology is worth the price of the book alone, and all future works on theology and economics will have to pay serious attention to this comparison, as well as to his call to make desire central to a theological analysis of capitalism. Bell's work stands as the strongest introductory text to a broad approach to theology and economics taken by such thinkers as D. Stephen Long, William Cavanaugh, and John Milbank."

"Bell presents a thorough critique of the neoliberal capitalist system. . . . Adherents of the free-market economic system will find much to ponder in this book. Bell's critique of the impact of the capitalist system on spiritual values is as deep as it is far reaching. In this regard, Bell's work plays an important role as he causes readers to reflect on their relationships with money as it relates to the kingdom of God. . . . Bell's work should be read by Christian capitalists as a form of self-evaluation."

"Bell's diverse range of mastered fields, including theology, ethics, and economics, and his commitment to the movement of radical orthodoxy, puts him in a unique position for this contribution. . . . The Economy of Desire has a number of strengths. First, its ability to summaries and apply Deleuze and Foucault is remarkable. . . . Second, Bell's language is vivid and many of its images are memorable. . . . Third, Bell's sensitive treatment of stewardship reflects a deep commitment to the local church. . . . Fourth, Bell takes holiness seriously. . . . Those in the Wesleyan tradition especially will find Bell's optimism for grace and passion for holy living refreshing. . . . Interested classes or small groups will find the work stimulating and engaging. . . . The preacher may find Bell's explanation of desire helpful in understanding his or her congregation and the role of the church in shaping desire."

"[Bell's] writing style is so compelling, honest, and effective, that the latest entry in [The Church and Postmodern Culture] series should hit the reader with the force of a sledgehammer to the Berlin wall. . . . The reader will certainly have much to contemplate. Bell's latest publication builds upon concepts that first appeared in his book regarding Liberation Theology, and is admittedly a starting point for what could become a larger work aiming to shape our notions of desire, and the capitalist structures which enslave many. It would be interesting to see what direction this potentially larger work could become in the future. Suffice it to say, this work is highly recommended for its direct approach, and graduate students of Christian Ethics, Cultural Anthropology, and Moral Theology may find it useful as secondary source material."

"The alternative path Bell advocates is not a route to withdrawal from or rejection of capitalism, but resistance to the totalizing impulses of the market. The key strength of this book is that it succinctly describes and thoroughly analyzes desire as the fundamental human power. . . . A noteworthy book."

"Extraordinary. . . . It is rigorous, but also pretty captivating. It is profound--asking what we most desire, what we think is the good, what is dignified and just. . . . A vision for a virtuous capitalism, with our desires disciplined and ordered properly."