The Early Church on Killing

A Comprehensive Sourcebook on War, Abortion, and Capital Punishment 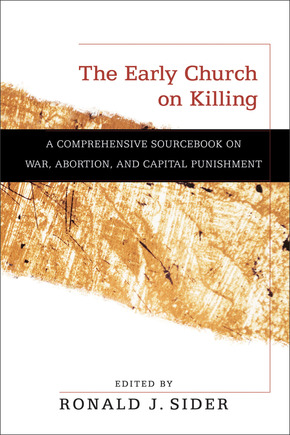 "An exceedingly careful, measured study of the literary evidence left by the early church on the morality of killing. It should prove to be authoritative in this field."--David P. Gushee, Center for Theology and Public Life, Mercer University

Noted theologian Ron Sider lets the testimony of the early church speak in the first of a three-volume series on biblical peacemaking. This volume offers a thorough, comprehensive treatment on topics of perennial concern--war, abortion, and capital punishment--providing English translations for all extant data directly relevant to the treatment of these issues by the early church until Constantine. Primarily, it draws data from early church writings, but other evidence, such as archaeological finds and Roman writings, is included. The book contains brief introductions to every Christian writer cited and explanatory notes on many specific texts. The Early Church on Killing will be a helpful text in courses on ethics, theology, and church history.

"In a time when violent death is all too common and wars of choice are undertaken all too readily, it is bracing to be reminded by this cloud of witnesses from the early church of the value that early Christians placed on human life and the severe judgments they issued on those who took it without cause."

"The question of 'killing' has been a contested and debated issue from the earliest years of the church's history. May Christians serve in the military? Is abortion ever justifiable? What of the question of capital punishment? Ron Sider has produced an invaluable handbook of primary source material from an ancient Christian perspective that can serve the entire church well as we continue to face these thorny and often heartrending questions in a modern context."

"In recent years some have argued that the church of the first three centuries might have been somewhat ambivalent in its opposition to war and killing. Ron Sider's excellent and comprehensive sourcebook shows once again that, even though the practices of individual Christians might have deviated at times from what Christians are called to be and do, the uniform voice of the church before its rise to political power was one of unconditional rejection of war and killing in all its pluriformity. Against the cultural norms of power and the state's demands for obedience, early Christian writers responded with a bewildering call to love one's enemies and pray for one's persecutors. And that, as Tertullian insisted, sets Christians apart from all other people."

"In this very important work, Ron Sider returns to his roots as a church historian to offer an exceedingly careful, measured study of the literary evidence left by the early church on the morality of killing. This volume is entirely free of propaganda or polemics, following the evidence where it leads. This deceptively brief, highly disciplined study should prove to be authoritative in this field."

"The composite portrait that these texts create is one of a radical Christian ethic and of a church that struggled to live into it. Even in the midst of this complexity, one can still see the outlines of a 'consistent ethic of life' in which aversion to the shedding of blood is paired with a willingness to lay down one's life in witness to the Prince of Peace. Should today's Christian communities have ears to hear this message, then the death-dealing powers that organize our world might have a genuine revolution on their hands."

"In a most helpful way and with an evident knowledge of the primary sources, Ronald Sider presents in translation a comprehensive sourcebook of early Christian statements on the issues of abortion, capital punishment, and military service. . . . Sider confronts the reader with the relevant texts themselves and so allows us to make our own independent judgment on the important question of the early church's position on these difficult and yet highly relevant themes. This book will be an asset in the libraries of pastors and laypeople alike and a welcome text in college and seminary classrooms."

"[Sider] has given us the definitive sourcebook of the early church's views on war, capital punishment, and abortion. . . . Although [his] conclusion is not altogether new, it has never been so carefully argued, sturdily buttressed, and comprehensively presented. A first-rate historian, Sider mines extant sources with remarkable precision and restraint, studiously avoiding the faulty generalizations of scholars who have suggested that just war thinking has deep roots in the early church. . . . Thanks to Sider's meticulous scholarship, we now have easy access to some of the best sources in our faith--the wise words and courageous witness of the early church."

"A very important work. . . . This volume represents [an] unprecedented contribution to our contemporary discussion. . . . Contemporary readers are likely to be surprised at the richness and diversity of these selections from the life of the early church. After all, the issues of war, abortion and capital punishment are hardly new issues. Sider's work reminds us of how the church struggled with these issues from its founding."

"A fairly comprehensive source book for anyone who is investigating what early Christians had to say about war, abortion, and capital punishment. . . . The importance of understanding what the pre-Constantinian church leaders had to say about these three important subjects is clear to anyone who has tried to do theology. . . . As Ron Sider makes his case against Christians participating in war, supporting capital punishment, or justifying abortion, he supports his beliefs by resorting to the writings of some of the earliest Church leaders, thus taking Church tradition seriously. It might be suggested that Sider is biased because of his a priori commitments to his Anabaptist theology; but as his commentaries on the Church Fathers make very clear, he has done his best to overcome any bias that may exist on his part. . . . The theological and biblical conservatism of the author is never concealed; but any reader of this book will have to admit that he tries hard to be objective. He does in this book what you would expect an honest scholar to do."

"For many years Ron Sider has written about Christian attitudes to life issues, and has advocated Christian nonviolence and a consistently pro-life approach to war, abortion, and capital punishment. In The Early Church on Killing he brings his historian's training to bear on the search for roots in the first three centuries of the church's history. . . . His method in this book is to assemble all the relevant material in one place, punctuated by his own commentary, which draws upon the extensive scholarly writing on the subject. . . . Four-fifths of The Early Church on Killing is a valuable collection of excerpts from Christian writings of the centuries prior to the emperor Constantine's accession in the early fourth century. . . . His comments address scholarly differences, and he appears fair in his representation of the work of leading non-pacifist scholars. . . . In a concluding 'Afterword' Sider sifts and summarizes the materials that he has presented. . . . In general I find Sider to be an authoritative guide who has the gift of writing crisply and effectively, and I warmly welcome this book."

"A book of writings from the early church having to do with killing. . . . What Sider has done is gather these passages into a single volume. There are a wide range of sources here. . . . Along with the passages, he provide[s] some context and helpful notes to help us get the point better. He [is] obviously trying to expand his audience to all levels of Christian readers: student, teacher, leader, layman. . . . It's in the Afterword where Sider present[s] his perspective on the passages, especially how to interpret and understand them practically. . . . And, in what should be welcomed by all, he [deals] with the difficult passages that some have argued challenge if not contradict his own pacifist, Anabaptist tradition. . . . Sider [makes] his case well for being able to say, 'The early church taught . . .' with some authority, some real meat behind his words. And this is definitely a very welcome and helpful resource for any Christian's library. . . . The Early Church on Killing (if utilized) will definitely raise the level of the conversation."

"As a bestselling author who has worked, taught, and written on topics related to killing for more than three decades, Sider is well qualified to produce a text on the early church and killing. . . . Sider has done the researcher a tremendous service in assembling into one place all of the extant works from the early church on the act of killing. Moreover, Sider is to be commended for the brief introduction he gives for each writer or work included, as well as for the helpful explanatory notes that sporadically appear throughout the four sections. These notes give helpful information about the background or context of a particular included source. The modernized English translations, as well as the four extensive indices make this volume very user-friendly and certainly well within the reach of scholars and laypeople alike. . . . The Early Church on Killing is a good sourcebook that ought to find its way onto the bookshelf of students, pastors, and laypeople."

"The greatest area of dispute has been in the whole realm of early Christian participation in war. . . . [Sider] has given us a great place to begin answering . . . questions [about war] in this sourcebook of early Christian texts on violent death in late antiquity."

"This book is an important contribution to the reflection on Christians' attitude towards human life and death. . . . The importance of the book is that almost all relevant texts are collected in one volume and that the readers can make their own decisions. . . . It is to be hoped that Sider's book will contribute to further reflection on its topics, since none of these topics has lost its urgency today."

"The translations are clear and Sider's introductory and connective notes are helpful and judicious. . . . The book makes a valuable contribution to Christian discussions of human dignity."

"This volume, ably edited by Ronald J. Sider, is . . . eminently useful. Sider has performed the yeoman service of gathering together all passages from noncanonical early Christian literature (from the first quarter of the fourth century and earlier) that are directly germane to the question of the permissibility of killing and presenting them in English translation. . . . This volume would be suitable for upper-division undergraduate and seminary courses, and could indeed be the central text for a course devoted to early Christian positions toward violence. The attractive presentation of texts, the intelligent editorial commentary, and the modest price make this a volume that merits space on the bookshelf of any scholar of early Christianity or Christian ethicist."