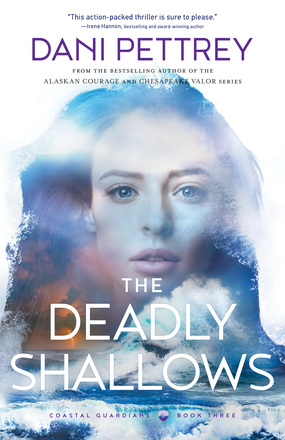 A deadly attack.
A stolen weapon capable of immense destruction.
A painful secret that threatens to tear two hearts apart.

CGIS Agent Noah Rowley is rocked to the core when several of his valued team members come under fire on his Coast Guard base. He and his remaining team race to the scene and end the attack, but not before innocent lives are lost. Furious and grief-stricken, he vows to do whatever is needed to bring the mastermind behind the attack to justice.

Stunned by the ambush, Coast Guard flight medic Brooke Kesler evacuates in a helicopter carrying the only surviving gunman. The gravely wounded man whispers mysterious information to Brooke that immediately paints a target on her back.

As Brooke and Noah race to uncover answers, emotions between them ignite. Noah struggles to protect Brooke at all costs and to conceal the secret that prevents him from becoming what he longs to be--the right man for her.

Everything is at stake as a horrifying truth emerges. . . .

The attack wasn't the end game. It was only the beginning.

"This action-packed thriller is sure to please."--IRENE HANNON, bestselling and award-winning author

"I love Dani's writing, and The Deadly Shallows is one of her best! Tightly written and dripping with tension. I couldn't turn the pages fast enough."--CARRIE STUART PARKS, bestselling and award-winning author of Relative Silence

"I love Dani's writing, and The Deadly Shallows is one of her best! Tightly written and dripping with tension. I couldn't turn the pages fast enough."

"Propelled by Pettrey's hallmark breakneck pace and adrenaline-pumping danger, this action-packed thriller is sure to please her many fans."

"Two Coast Guard members struggle with their feelings for each other as they track down the mastermind behind a deadly attack on their base in the pulse-pounding third entry in Pettrey's Coastal Guardians series (after The Crushing Depths). . . . Pettrey masterfully balances Noah and Brooke's burgeoning relationship with the unraveling of the tightly plotted mystery. Fans of Lynette Eason and DiAnn Mills will enjoy this."