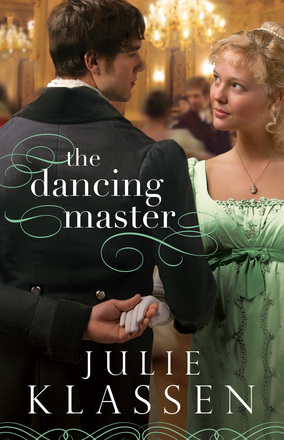 Finding himself the man of the family, London dancing master Alec Valcourt moves his mother and sister to remote Devonshire, hoping to start over. But he is stunned to learn the village matriarch has prohibited all dancing, for reasons buried deep in her past.

Alec finds an unlikely ally in the matriarch's daughter. Though he's initially wary of Julia Midwinter's reckless flirtation, he comes to realize her bold exterior disguises a vulnerable soul--and hidden sorrows of her own.

Julia is quickly attracted to the handsome dancing master--a man her mother would never approve of--but she cannot imagine why Mr. Valcourt would leave London, or why he evades questions about his past. With Alec's help, can Julia uncover old secrets and restore life to her somber village...and to her mother's tattered heart?

Filled with mystery and romance, The Dancing Master brings to life the intriguing profession of those who taught essential social graces for ladies and gentlemen hoping to make a "good match" in Regency England.

"Whether you're a fan of Jane Austen or Charlotte Bronte, or both, you will soon become a fan of Julie Klassen once you read this wonderful book."--GoodReads

"Well-developed characters, plot twists, and attention to period detail make this a sure bet for fans of Regency novels."--Library Journal

"Regency/Klassen fans will love the mystery, romance, and drama."--Publishers Weekly

"Multiple Christy Award-winning Klassen once again demonstrates her gift for creating richly layered characters and skillfully integrating a multitude of fascinating historical facts into a spirited story that will have wide appeal to both inspirational fans as well as readers who enjoy sweet historical romances."