Its Origin, Transmission, and Authority 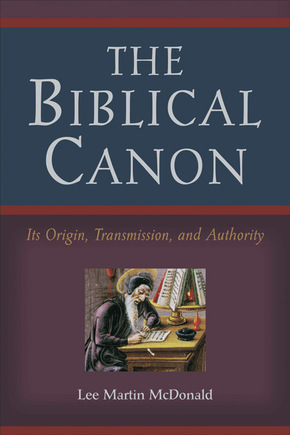 This is the thoroughly updated and expanded third edition of the successful The Formation of the Christian Biblical Canon. It represents a fresh attempt to understand some of the many perplexing questions related to the origins and canonicity of the Bible.

"What is the origin of our Bible? Who chose the books to be included in our Bible? When were the last discussions on the contents of our Bible? How do we find God's Word and what constitutes 'the Bible'? Such questions are fascinating to many in western culture. L. M. McDonald is the premiere authority on all these crucial questions. He demonstrates that no early council defined or limited the canon. For Jews discussions of the canon continued long after Jamnia (in the first century CE) and into the sixth century. For many Christians the question of canon and its limits continue unabated. McDonald's masterpiece is the place to begin exploring informed answers to all these questions."--James H. Charlesworth, George L. Collord Professor of New Testament Language and Literature, director of the Princeton Seminary Dead Sea Scrolls Project, Princeton Theological Seminary

"Lee McDonald's magnum opus is the fair fruit of a lifetime's labor. His is an updated and fluent historical reconstruction of the canonical process, marked by the careful consideration of the real evidence that encourages a more precise discussion of the history and idea of a Christian biblical canon. Not only does McDonald seek to understand the complex and variegated phenomena of canon formation within the social worlds of both Judaism and earliest Christianity, he is ever alert to the serious theological and hermeneutical questions his discussion engenders about the nature and role of Scripture within today's faith community. While McDonald's conclusions will surely be debated, no scholar or student interested in these important matters will be able to neglect his fine book."--Rob Wall, professor of the Christian Scriptures, Paul T. Walls Chair in Wesleyan Studies, Seattle Pacific University

"This thorough introduction to the questions concerning the formation of the Christian canon offers a substantial revision of the author's useful previous work. McDonald does not seek to answer every question he asks, but he asks nearly every question one can imagine, and he answers many of the central ones by drawing on his years of reflection on the topic. . . . I certainly commend this introduction to the Christian canon to all biblical scholars and to our most diligent students. McDonald helps frame for us the questions we must continue to ponder, and he thoroughly summarizes for us the fruit of his extensive labors in this important field."--Review of Biblical Literature

"This book is a 'long overdue' revision of the 2nd edition. . . . Addressed not least to his evangelical peers, McDonald's tome takes into account significant recent scholarship, thereby challenging some cherished but untenable assumptions about canon development. . . . McDonald attempts to break free of untested assumptions and thus advance our knowledge in the area of canon development. . . . Though not radical, McDonald's conclusions are far-reaching. Much of the 'recent' research brought to bear is not new, but is at long last presented in a comprehensive and compelling manner. McDonald denies past allegations that he wants to change the canon, something that is, after all, a practical impossibility. More importantly, he seems most interested to challenge his evangelical peers at the level of their presuppositions about scripture. . . . All students of the New Testament and early Christianity can be thankful for this new work on the origins of the canon. It is a 'must read,' and will be a resource and a talking point for years to come."--Chrisendom blog

"Not all agree with McDonald's analysis of historical evidence, but the work remains a remarkably comprehensive and vital source for the subject of its title."--Expository Times

"The book is highly recommended for students and scholars alike as an excellent introduction to the central issues at stake in the formation and reception of Christian scripture."--The Catholic Historical Review

"[This book] has established itself as a major handbook on the formation of the biblical canon from the biblical period to the early fifth century CE: the time of Jerome and Augustine."--International Review of Biblical Studies

"This book has many strengths, most notably its unflinching look at all relevant evidence and its care in assessing the arguments of previous scholars. . . . McDonald successfully demolishes facile assumptions about a pristine period of biblical origins even as he wards off conspiracy theories such as those that made Dan Brown a millionaire. He helpfully locates the Bible as a collection in its proper place, the ongoing life of the church . . . [This work] provide[s] those who take theology and history (and their intersection) seriously a better understanding of the origins of the central book of the church. For that, [McDonald] deserves our appreciation."--Restoration Quarterly

"This is a very accessible text that covers its subject with a comprehensive attention to detail. While many scholars interested in the topic will find this book useful, seminary students will likely derive the most benefit from McDonald's work. Not only does McDonald consistently ensure that all technical terms and references are clearly defined and explained (e.g., 'Septuagint,' 'Cairo Genizah'), he also explicitly writes out of an evangelical commitment to scripture as the word of God and a pastoral concern for the student or layperson whose sense of the Bible's trustworthiness is threatened when they first encounter many of the issues taken up in this text. This is certainly the best 'first-stop' for anyone interested in learning more about the historical issues surrounding the origin and transmission of the biblical canon, while also providing stimulating observations and questions for those with concerns regarding the canon's continued authority in the Christian community of faith."--Toronto Journal of Theology

"This third edition of Lee McDonald's critically acclaimed The Formation of the Christian Biblical Canon, while constituting an almost complete rewrite, is largely a more robust and supported presentation of his earlier positions. The differences between the second and third editions are immediately apparent, as a glance at the table of contents reveals. . . . McDonald updates and bolsters his work by harvesting research in several fields. Along with subsequent advances in canon studies, he engages recent findings on the Dead Sea Scrolls, rabbinic literature (to which a new chapter is dedicated), Septuagint, and textual criticism (which is considered in another new chapter on ancient manuscripts, books, and translations). He also considerably amends the contents of chapters from the previous edition. . . . With this edition, McDonald remains one of the leading thinkers on the formation of canon and the historical reception of canonical literature. And this volume is still the best single-source for a grasp of the subject. Those who have older editions of this work will want to acquire this one. The Biblical Canon is a necessary addition to the library of any biblical scholar, theologian, or theological student."--Theological Book Review

"This work aims to be an introduction to the study of the canon, and it certainly accomplishes that and much more. . . . The Biblical Canon overall is an excellent work, but only when the reader is readily adept in working through the weighty issues in canon studies. It is a must read for any serious student looking for an in-depth introduction to the study of the scriptural canon for early Jewish and Christian communities."--Donald Kim, Southwestern Journal of Theology